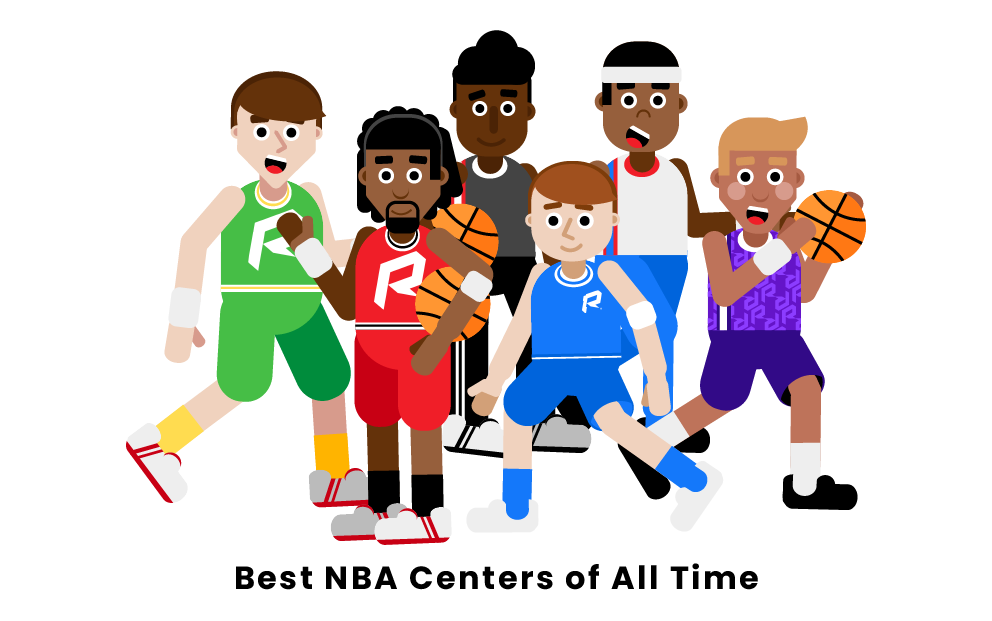 Who are the best NBA centers of all time?

Kareem Abdul-Jabbar is regarded as the best center in NBA history, not to mention one of the greatest ever to play the sport of basketball. With a professional playing career that spanned two decades (1969 -1989), Abdul-Jabbar won a record six MVPs, six NBA Championships, two Finals MVPs, and is the league’s all-time leading scorer with 38,387 points. These accomplishments are supplemented by 15 All-NBA and 11 All-Defensive Team appearances, showcasing his longevity at the highest level. He also trademarked one of the NBA’s most unstoppable movies, the “skyhook.”

After playing four years at the University of California Los Angeles, winning an impressive three Collegiate National Championships, Abdul-Jabbar was drafted by the Milwaukee Bucks. Paired with triple-double machine Oscar Robertson in his second season (1970-1971), he won his first MVP, Championship, and Finals MVP. In 1975, he was traded to the Los Angeles Lakers, where he would go on to win five more MVPs and five more rings. In LA, Abdul-Jabbar was notably part of the “Showtime Lakers” alongside Magic Johnson, James Worthy, and coach Pat Riley, which was one of the greatest dynasties in NBA history.

Bill Russell was one of the NBA’s first superstars and remains the winningest player in NBA history with 11 championships. With his leadership, defensive acumen, and all-time great rebounding ability, few rival Russell on the list of greatest players in NBA history.

Russell was a two-time Collegiate National Championship winner before being drafted by the Boston Celtics (via trade by the St. Louis Hawks) in 1959. He was a key component to the 1960s Celtics dynasty that won an unrivaled eight straight championships and 11 in total. Despite never averaging more than 18.9 points per game, Russell was a force to be reckoned with on defense due to his positioning and shot-blocking ability. He is also the second all-time leading rebounder with 21,620 boards, averaging 22.5 a game across his 13-year career.

Wilt Chamberlain is often considered to be the most dominant player in NBA history. Whether on offense or defense, the four-time MVP and Hall of Famer dominated opponents on a nightly basis. Chamberlain played for the Philadelphia Warriors and the Los Angeles Lakers, winning one championship with each.

In many ways, Chamberlain is a statistical anomaly. In terms of scoring, he is the league’s seventh all-time leading scorer (31,419), he holds the record for most points scored in a single game (100), and he is the only player to have averaged over 40 and 50 points per game in a season. Additionally, he is the NBA’s all-time leading rebounder (23,924), he made two All-Defensive selections, and he is the only center to have led the league in assists in a season (1967-68, 8.6 per game). Chamberlain was one of the most well-rounded players in NBA history and was masterful at scoring, distributing, rebounding, and defending.

Shaquille O’Neal, commonly referred to as “Shaq,” was one of the most unstoppable players in NBA history. Standing tall at 7’1” (215 cm) and weighing over 300 pounds (136 kg) throughout this 19 season career, he dominated the NBA with power and ferocity, yet an understated level of skill too.

O’Neal was drafted #1 by the Orlando Magic in 1992 and made an immediate impact. In 1995, he led his team to the NBA finals, only to lose to Hakeem Olajuwon’s Houston Rockets, and he made the NBA’s Top 50 Players of All-Time list at only 24 years old in 1996. After signing with the Los Angeles Lakers in 1996, he became a cornerstone of one of the NBA’s greatest teams of all time. Led by Phil Jackson and with a lethal partner in Kobe Bryant, the Lakers won three straight championships (2000, 2001, 2002), with O’Neal winning three Finals MVP distinctions. In 2004, he was traded to the Miami Heat, where he would win his fourth and final ring.

O’Neal won the MVP award in 2000, was a 15-time All-Star, made 14 All-NBA Teams, and won two scoring titles, making him a legend in the NBA and one of the most fearsome centers the league has ever seen.

Moses Malone is an NBA Champion (1983) who has three MVPs, 13 All-Star appearances, and six (total) rebounding titles to his name. Malone spent two years in the ABA before joining the NBA in 1976. He was a pioneer, being the first player in modern basketball history to skip college and go straight to the professional game.

Malone combined a high-scoring game with other-worldly rebounding, placing him tenth all-time in scoring and fifth in rebounding. He built a legacy as arguably the greatest offensive rebounder in NBA history. He has the all-time highest average offensive rebounds per game at 5.1, and his 7.2 offensive boards per game in 1978-79 remains a single-season record. Malone is also one of only eight players to have won at least three MVPs.

With Julius Erving and Maurice Cheeks on the Philadelphia 76ers, they went 12-1 in the 1982-83 playoffs en route to winning the Championship. In the finals, they swept Kareem Abdul-Jabbar and Magic Johnson’s Showtime Lakers.

Hakeem “The Dream” Olajuwon, born in Lagos, Nigeria, is without a doubt the greatest international NBA player of all time and rivals Bill Russell as the best defensive center. He was an all-around player that was a nightmare to defend and attempt to score against.

Olajuwon played all but one of his 18 seasons for the Houston Rockets, winning back-to-back Championships and Finals MVPs in 1994 and 1995. In fact, the 1995 Houston Rockets are the lowest seed (6) to have ever won the Finals. In 1993-94, Olajuwon became the first player in NBA history to win MVP, Defensive Player of the Year, and Finals MVP in the same season. Olajuwon is 13th all-time in scoring, 14th in rebounds, ninth in steals, and first in blocks. He has two Defensive Player of the Year awards and nine All-Defensive team selections.

Who is the best NBA center of all time?

Kareem Abdul-Jabbar is considered the best NBA center of all time. In addition to being the league’s all-time leading scorer, the former Milwaukee Buck and Los Angeles Laker won six Championships, two Finals MVPs, and a record six MVPs. In fact, he is the only player in history to win MVP without making the playoffs in 1975-76. Abdul-Jabbar was also notably part of the Showtime Lakers dynasty who made eight NBA finals in the 1980s.

What NBA center has the most points scored all time?

Kareem Abdul-Jabbar has the most points scored of all time in the NBA (excluding playoffs). Abdul-Jabbar totaled 38,387 points across 20 seasons, almost 2,000 more than second-placed Karl Malone. He has held this record since April 5, 1984, when he surpassed then-leader Wilt Chamberlain.

Abdul-Jabbar averaged double-digits in each of his 20 seasons and retired with a career average of 24.6 points per game. He is also a two-time scoring champion and averaged a career-high 34.8 points per game in 1971-72.

What NBA center has the most rebounds all time?

Wilt Chamberlain is the NBA’s all-time leader in rebounds with 23,924. That is 2,000 more than his contemporary and rival, second-placed Bill Russell. Chamberlain averaged an all-time record 22.9 rebounds per game and led the league in rebounding a record 11 times. He also holds the record for most rebounds in a single game with 55 (November 24, 1960). Standing tall 7’1 and with an alleged 40-plus inch vertical, grabbing rebounds was one of Chamberlain’s many specialties.

Pages Related to Top 6 Best NBA Centers of All Time