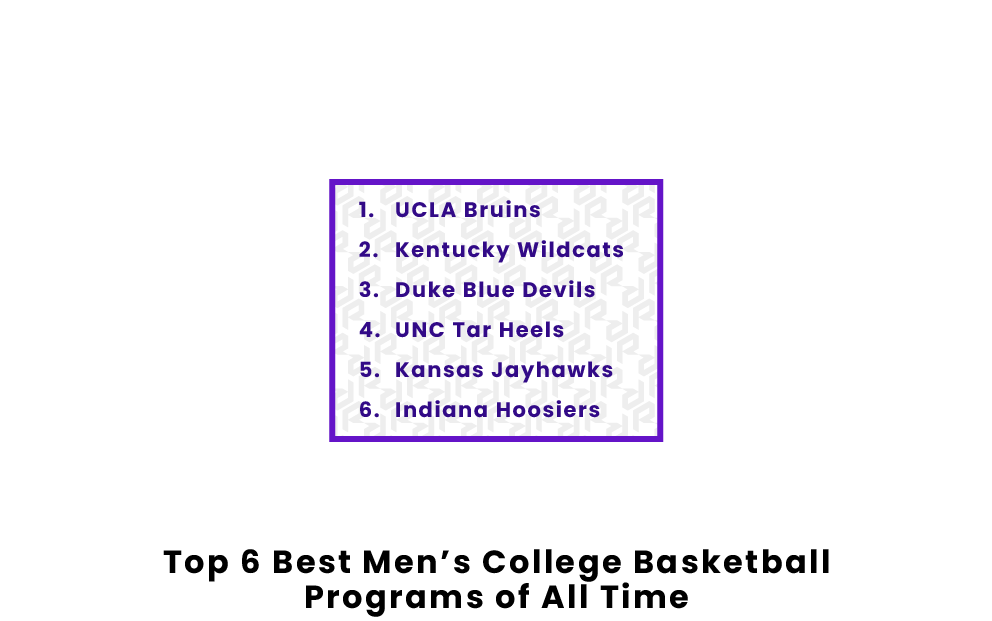 Men’s college basketball is one of the most popular sports in America, especially when March Madness begins each year and the best teams in the country compete for the National Championship. Since the first NCAA Division I men’s basketball tournament in 1939, a few teams have proven to be the best of all time.

What Are the Best Men’s College Basketball Programs of All Time?

The UCLA Bruins are the most successful basketball program in NCAA Division I history. The Bruins have won a total of 11 National Championships, more than any other college program. Much of the team’s success can be attributed to coach John Wooden, who won ten championships in 12 years and led a winning streak of seven straight years. Additionally, from 1971 to 1973, Wooden led the Bruins to an 88-game winning streak. After Wooden’s departure in 1975, UCLA did not win another National Championship until 1995, coached by Jim Harrick. Many famed players have competed for the Bruins, including Kareem Abdul-Jabbar, Bill Walton, Gail Goodrich, Marques Johnson, and Reggie Miller.

The Kentucky Wildcats are often considered one of the best men’s college basketball teams of all time. The Wildcats compete in the NCAA Southeastern Conference (SEC). In the 1947-1948 season, Kentucky won its first National Championship, led by coach Adolph Rupp, defeating Baylor 58-42. The Wildcats went on to win another championship the following year, defeating Oklahoma State 46-36. Since then, Kentucky has won six other national championships led by coaches including Joe B. Hall, Rick Pitino, Tubby Smith, and John Calipari. Throughout the program’s rich history of success, many star players have competed for the Wildcats, such as Cliff Hagan, Antoine Walker, Tony Delk, Ralph Beard, Alex Groza, John Wall, and Anthony Davis.

The Duke Blue Devils are one of the most dominant college basketball programs, especially in more recent years. The Blue Devils compete in the Atlantic Coast Conference (ACC). Duke won its first National Championship in 1991, led by coach Mike Krzyzewski (or Coach K) and star player Christian Laettner, by defeating Kansas 72-65. Since then, Coach K has led the Blue Devils to four more National Championship victories and is the second-most winningest coach in NCAA Division I history after John Wooden. A few of the most notable players to compete for the Blue Devils include Christian Laettner, Grant Hill, Bobby Hurley, Shane Battier, and J.J. Reddick.

Often considered the best basketball player of all time, Michael Jordan competed for the Tar Heels for three seasons from 1981 to 1984. During his time at UNC, Jordan led the team in scoring in his sophomore and junior years, started his freshman year and led the Tar Heels to win the National Championship that same year, and had an overall record of 88-13 with the team. Other notable UNC coaches and players include Frank McGuire, Dean Smith, Roy Williams, Tyler Hansbrough, Phil Ford, and James Worthy.

The Indiana Hoosiers compete in the Big 10 Conference alongside one of their biggest rivals, the Purdue Boilermakers. Indiana is one of the most historic college basketball teams, as it won its first national championship in only the second year of the NCAA tournament. In 1940, the Hoosiers, coached by Branch McCracken, defeated Kansas 60-42 to claim the school’s first title. After 13 long years, McCracken led the Hoosiers to another championship appearance against Kansas, where the team won a close game 69-68. Indiana would go on to win three more national titles in 1976, 1981, and 1987 led by legendary coach Bob Knight and players such as Steve Alford, Isiah Thomas, and Scott May.

Since they played their first game in 1901, the UConn Huskies have been a dominant force in collegiate men’s basketball. Over their more than 120 years on the intercollegiate basketball circuit, UConn has appeared at 35 NCAA Tournaments, won their Big East conference title 31 times, and won the NCAA National Championship four times. Though they have had many great seasons, the Huskies had their peak seasons in the late 1990s through the mid-2010s, even winning March Madness in 1999, 2004, 2011, and 2014. Notable UConn players include Ray Allen, Clifford Robinson, Caron Butler, Jeremy Lamb, and Andre Drummond.

The Villanova Wildcats have enjoyed success throughout their long history as a classic East Coast basketball team. The team was founded in 1920 and is the most dominant member of the Philadelphia Big Five. The Wildcats have three National Championships. Their first win, from the eighth seed in 1985, set a still-standing record for the lowest seed to win the tournament. They achieved their other championships more recently, in 2016 and 2018. Villanova competes in the Big East, where they have won the conference championship eight times. Some iconic Villanova coaches are Jack Kraft, Rollie Massimino, Steve Lappas, and Jay Wright. Notable Wildcat players include Ryan Arcidiacono, Maalik Wayns, Jalen Brunson, Donte DiVincenzo, and Kyle Lowry.

Who was the best individual college basketball team of all time?

The 1972 UCLA Bruins are often considered the best college basketball team of all time. They finished their season with an overall record of 30-0, going 26-0 in the regular season and winning all of their tournament games, including the National Championship against Florida State. Under the leadership of coach John Wooden and star player Bill Walton, UCLA defeated each of their opponents in the 1972-1973 season by an incredible average of over 30 points per game.

Yes, seven college basketball teams have gone undefeated for an entire season. The 1956 San Francisco Dons were the first team to ever go undefeated. The next year, the UNC Tar Heels also completed a perfect season. Following the Tar Heels, the UCLA Bruins achieved four undefeated seasons in 1964, 1967, 1972, and 1973. Finally, the 1976 Indiana Hoosiers were the seventh and most recent team to record a perfect season.

Which college basketball program has the most wins?

The Kansas Jayhawks have the most wins in the history of NCAA Division I Men’s Basketball. The Kentucky Wildcats had held the record for years. However, in the Sweet Sixteen round of the 2022 NCAA Tournament, the Jayhawks took over as the winningest team when they beat Providence for their 2,354th win.