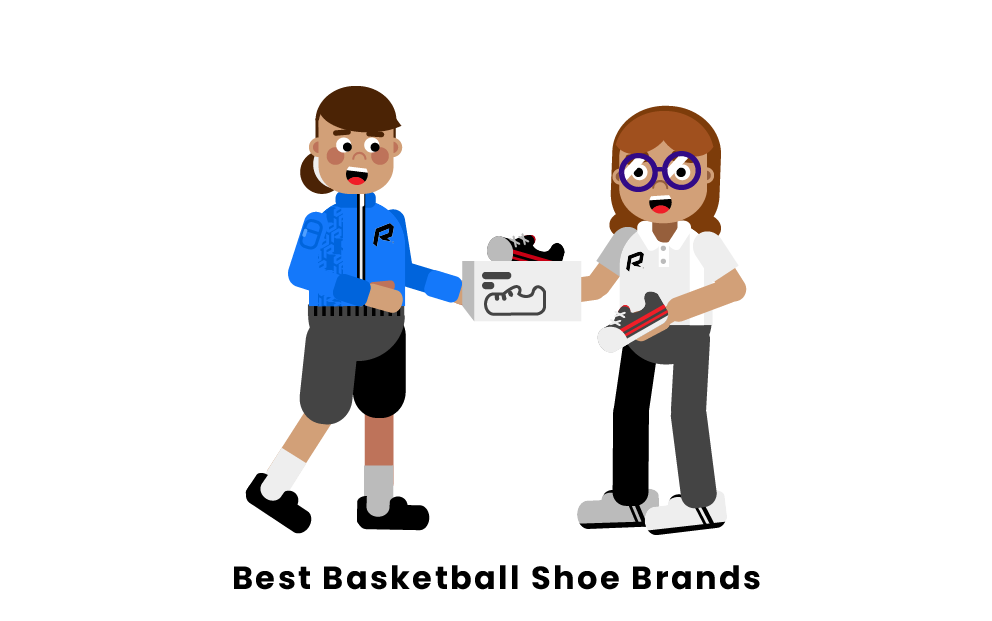 Basketball shoes are an integral part of the game, providing not only functionality but a sense of style and personality for players. While countless basketball sneakers have been released over the years, the best brands deliver shoes that allow players to consistently perform at the highest level and express themselves.

What are the most popular basketball shoe brands?

Air Jordan is arguably the most popular basketball shoe brand in the world, known for offering top-of-the-line athletic footwear. The brand was created under the name of one of the greatest basketball players of all time, Michael Jordan. When Jordan entered the NBA in 1984, he was signed by Nike and immediately given his own shoe line. The Air Jordan I was the brand’s first shoe Jordan wore in-game. However, due to the shoe’s flashy red, black, and white colorway, the NBA banned the shoes because all of the other basketball sneakers were plain white at the time. Nike was willing to take a risk and paid the $5,000 fine issued to Jordan every time he wore the sneakers in a game. The bold decision paid off, as the first 50,000 pairs of Air Jordan I’s sold out instantly and set the brand up for a bright future. Since then, Jordan Brand has released hundreds of iconic and exclusive sneakers and has built an empire representing some of the league’s best players, such as Carmelo Anthony, Russell Westbrook, and Chris Paul.

Nike is one of the most notable basketball and shoe brands of all time. In 1972, the brand released its first two basketball sneakers known as the Blazer and Bruin. Ten years later, Nike introduced one of its most iconic basketball sneakers of all time: the Air Force 1. These sneakers were worn by several NBA players, including Moses Malone, Michael Cooper, Mychal Thompson, and Jamal Wilkes. In 1985, Nike signed Michael Jordan and debuted the Air Jordan brand, proving to be a huge step for the company’s success. Following this, the brand released several other historic basketball sneakers, including the Dunk and Terminator High, while also signing many NBA superstars to signature shoe deals such as Charles Barkley, Penny Hardaway, Vince Carter, and Scottie Pippen. In the 2000s, Nike continued to boost its basketball resume, bringing on NBA legends Kobe Bryant, Lebron James, and Kevin Durant, whose signature shoe lines are among the most popular of all time.

Adidas is another widely popular brand that specializes in sportswear and lifestyle apparel. While the brand covers many sports, Adidas did not release its first basketball sneaker until 1970, when it unveiled the Superstar. The Superstar became one of the most iconic basketball sneakers of all time. The sneakers were worn by legendary players, including Kareem Abdul Jabbar and Jerry West. Throughout the next 20 years, the brand introduced several other basketball sneakers, including the Campus, Nizza, and RIVALRY. In 1997, Adidas released the first signature shoe of NBA superstar Kobe Bryant called the KB8 (now known as “Crazy 8”). These became some of the brand’s most notable basketball sneakers in history. In 2002, Adidas signed another star player, Tracy McGrady, who wore several signature sneakers during his career that ended up being best sellers for the brand. Since then, Adidas has introduced several new footwear technology concepts, including AdiZero Crazy Light, CrazyLight Boost, and Crazy Explosive, along with signing talented players including Damian Lillard, James Harden, Kevin Garnett, and Derrick Rose to represent their brand.

Reebok is responsible for some of the most famous basketball sneakers of all time, and the brand became particularly prominent in the late 1990s and early 2000s. One of these sneakers is known as the “Reebok Pumps,” which were equipped with the brand’s signature technology that allowed the wearer to press a button and pump air into areas of the shoe for a more snug fit. The Pumps were made famous by Boston Celtics player Dee Brown in the 1991 NBA Dunk Contest. During the contest, Brown wore the innovative sneakers and made sure it was obvious he was pumping up his shoes before each of his dunk attempts. To win the competition, he completed his famous no-look slam dunk where he covered his eyes with his arm mid-air. This performance and brilliant marketing tactic made the Pumps one of the hottest sneakers on the market. Reebok also boosted its basketball portfolio by signing one of the best point guards of all time: Allen Iverson. Iverson boasted one of the most famous signature shoe lines in history with sneakers such as the Question and the Answer I-XIII.

Under Armour recently became one of the most notable basketball shoe brands. The brand introduced its first basketball sneakers in 2010 through its Micro G line. This line of sneakers included the Micro G Fly, Micro G Blur, Micro G Lite, and Micro G Black Ice, which was the first signature shoe of NBA player Brandon Jennings. Under Armour experienced some success with these sneaker models, but its basketball brand did not see notable growth until NBA superstar Steph Curry premiered his first signature sneaker with the brand in 2015. Curry wore his sneakers, known as the Curry 1’s, during the NBA Finals that year, where he won his first NBA Championship. Since then, he has released several more signature sneakers with Under Armour that focus on providing ankle support and mobility for quick movements on the court. Curry was a critical part of Under Armour’s success in the basketball shoe market, with many of his sneakers integrating the brand’s innovative technologies such as Charged Cushioning, Micro G foam, EVA midsoles, and HOVR cushioning.

Puma is one of the most established basketball shoe brands of all time, as it was the first to release a signature sneaker in 1973. The sneaker was known as the Puma Suede or “Clyde,” designed for NBA player Walt “Clyde” Frazier. While the New York Knicks had a team sneaker that Frazier wore while playing, he was unhappy with the sneaker’s design and asked Puma to design him a wider and more lightweight shoe. The Puma Clyde became one of the brand’s most iconic sneakers to date. Since then, Puma released several other notable sneakers including the Sky II HI, Ralph Sampson, and Cell VI. The Ralph Sampson sneakers quickly became famous because of their abnormally large size and durability needed to fit Sampson, who was 7-foot-4. The Cell VI caught fire after an ad was aired with NBA superstar Vince Carter wearing the sneakers. Recently, Puma has revamped its line of basketball shoes, signing several athletes such as LaMelo Ball, DeMarcus Cousins, and DeAndre Ayton.