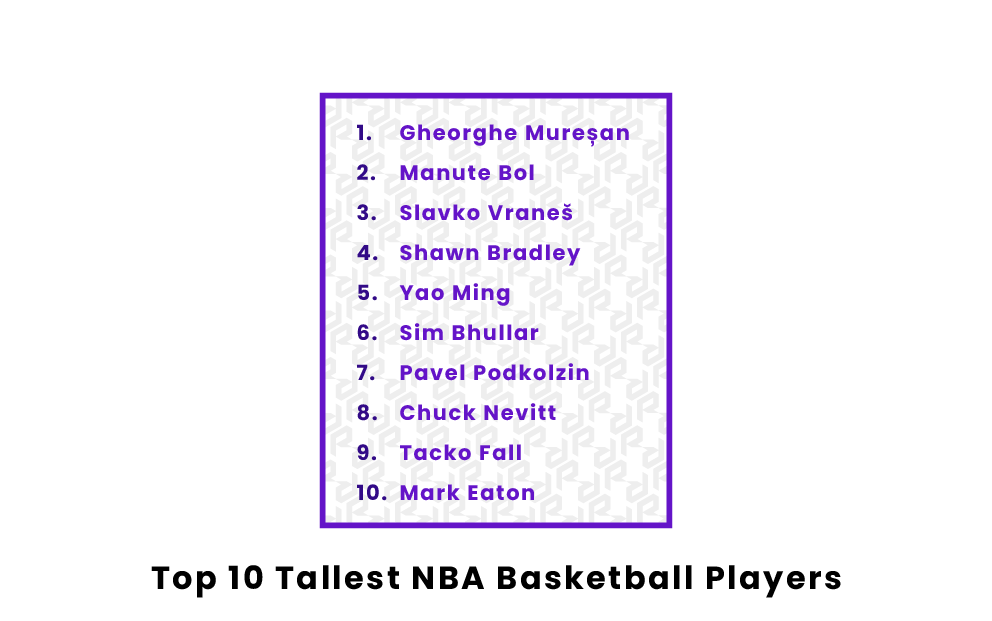 The NBA is full of tall players, but only a select few have the distinction of being one of the tallest to ever play the sport. However, just because these players are tall doesn’t mean they all were able to stick in the NBA. Read on to learn about the 10 tallest NBA players of all time and what their careers looked like.

Who are the tallest NBA basketball players of all time?

Gheorghe Mureșan is the tallest player to ever play in the NBA. Mureșan is Romanian and played in the NBA from 1993 to 2000. Mureșan played for the Washington Bullets, Washington Wizards, and New Jersey Nets of the NBA. Mureșan has two children: George and Victor. George Mureșan is six feet, 10 inches tall and walked onto the Georgetown basketball team as a forward. Victor Mureșan also walked onto the Georgetown basketball squad.

Manute Bol was just a hair shorter than Gheorghe Mureșan, with the Guinness Book of World Records sizing him at seven feet, 6.75 inches. Some sources even cited Bol as being tied with Gheorghe Mureșan for the honors of the tallest NBA player ever. Bol had an incredible wingspan of eight feet, six inches. Bol recorded 2,086 blocks, which is the 16th most in NBA history. Bol’s defensive prowess made him valuable, as did his impressive stature.

Slavko Vraneš is the third-tallest NBA player in history, coming in at seven feet, six inches. Vraneš was selected by the New York Knicks in the second round of the 2003 NBA Draft. Vraneš never actually ended up playing for the Knicks, as they waived Vraneš. Instead, Vraneš made his NBA debut with the Portland Trail Blazers after signing a 10-day contract. He played just one game in the NBA.

Shawn Bradley spent 12 years in the NBA, playing for the 76ers, Nets, and Mavericks. In total, Bradley played 832 NBA games, 582 of which were with the Dallas Mavericks. Bradley blocked 3.4 shots per game in 1996-97, which was the most in the league that year. Bradley was a devoutly religious man and engaged in numerous acts of charity. Among other honorable work, Bradley treated leprosy colonies in India. Tragically, Bradley was involved in a horrible biking accident that left him paralyzed and confined to a wheelchair.

Yao Ming played for the Shanghai Sharks of the Chinese Basketball Association and the Houston Rockets of the NBA. Ming is credited as being one of the best Chinese athletes of all time and represented the modernization of China as a whole: his confidence and skill made him an icon for China. Ming, born in 1980 in Shanghai, spent eight years in the NBA, all with the Houston Rockets. Ming scored 9,196 points in 481 games and is an NBA Hall of Famer.

Sim Bhullar was the first-ever player of Indian origin to play in the NBA. Bhullar played just three minutes of NBA game time, playing on a 10-day contract with the Sacramento Kings. Bhullar went undrafted in 2004, despite his impressive stature. He was signed and released by the Kings twice, in 2014 and in 2015. Bhullar also spent time in the NBA Development League, playing for the Reno Bighorns and Raptors 905. After that, Bhullar signed with the Dancin’ Tigers of the Super Basketball League in Taiwan.

Pavel Podkolzin is a retired Russian basketball player. Podkolzin made his professional debut in Russia, playing for Lokomotiv Novosibirsk in Russia’s second division. Three years later, he was drafted by the Utah Jazz in 2004. Not soon after, the tall center was traded to Dallas in exchange for a 2005 first-round pick. Podkolzin, who was drafted to be a defensive specialist, could never quite stick in the NBA. The Dallas Mavericks eventually waived his rights after two seasons, during which Podkolzin played just two games.

Chuck Nevitt was another seven-foot, five-inch basketball player. Nevitt had a much more successful NBA career than guys like Sim Bhullar and Pavel Podkolzin: he played in the NBA for nine years. During his career, Nevitt played for the Houston Rockets, Los Angeles Lakers, Detroit Pistons, Chicago Bulls, and San Antonio Spurs. Nevitt’s career highlight was winning an NBA Championship in 1984-85 with the Los Angeles Lakers.

Tacko Fall was born and raised in Dakar, Senegal. Fall moved to the US as a 16-year-old, ready to pursue his dream of professional basketball. He eventually played for the University of Central Florida, making his mark on March Madness. In a 2019 Round of 32 game, Fall was challenged with guarding Duke’s Zion Williamson. Fall had a great defensive performance, but Duke barely managed to beat UCF to advance to the Sweet 16. Fall was undrafted, but signed with the Boston Celtics in 2019. After two years with the Celtics, where Fall was a fan favorite, he signed with the Cleveland Cavaliers. Some sources list Fall as being as tall as 7’6”, which would tie him with Yao Ming for fifth place on this list.

Who is the tallest NBA basketball player ever?