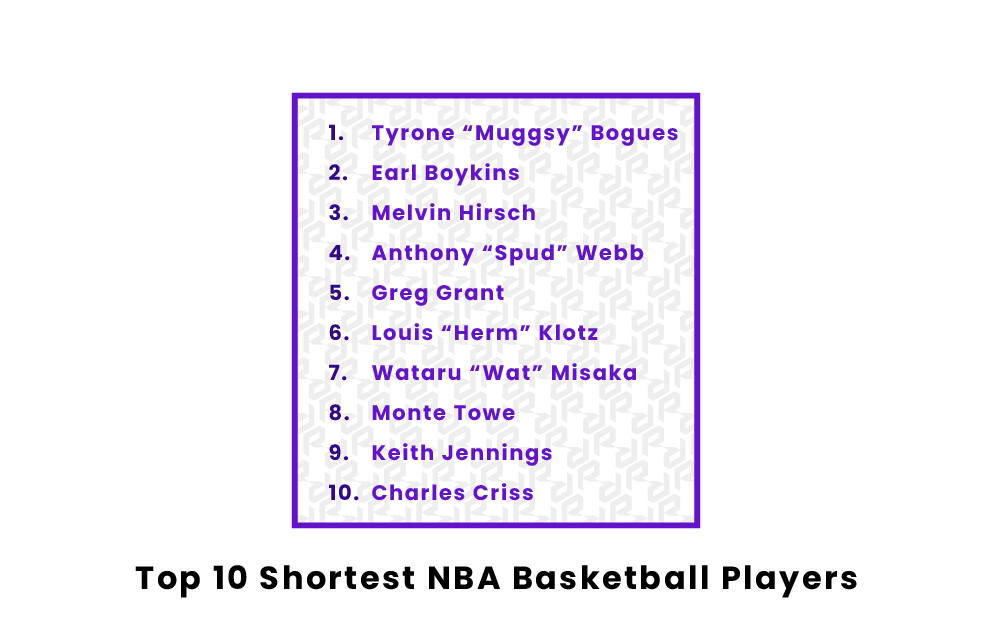 Traditionally, basketball is a sport dominated by some of the tallest individuals in the world. In the National Basketball Association (NBA), the average height of a player is 6’7”. T​​hat being said, over the years, there have been some shorter players to play and have great success at the professional level. Listed below are the ten shortest NBA players of all time.

Who are the shortest NBA basketball players of all time?

The shortest player in NBA history, Tyrone “Muggsy” Bogues, played in the league despite being just 5’3”. He played for the Washington Bullets, Charlotte Hornets, Golden State Warriors, and Toronto Raptors from 1987-2001. He was never much of a scorer, never averaging more than 11.1 points per game, but he did average a very respectable 7.6 assists per game over his career. During his rookie year on the Bullets, Bogues was a teammate of Manute Bol, who, at 7’7”, is tied for the tallest player in NBA history.

The second shortest player in NBA history, Earl Boykins was two inches taller than Muggsy at 5’5”. Boykins played for ten different NBA teams over his 14-year career from 1999-2012. Boykins had his best year in 2006-07, when he averaged 14.6 points and 4.4 assists per game while playing for the Denver Nuggets and Milwaukee Bucks. Despite being undrafted out of Eastern Michigan, Boykins was able to carve out a long, successful NBA career for himself.

Although he only played one season, Melvin Hirsch still qualifies as the third shortest player in NBA history at 5’6”. Hirsch was a part of the very first NBA season in 1946-47, when it was known as the Basketball Association of America (BAA). He played in 20 games for the Boston Celtics, and he had 19 points and ten assists total in those 20 games. Prior to joining the NBA, Hirsch played for his hometown Brooklyn College in the early 1940s.

The shortest player ever to win the NBA Slam Dunk contest, Anthony “Spud” Webb stood at just 5’7”. Although the highlight of his career was winning the Dunk Contest in 1986, Webb did play 12 seasons in the NBA from 1985-1998. Most of his career came with the Atlanta Hawks, but he also played for the Sacramento Kings, Minnesota Timberwolves, and even briefly for the Orlando Magic. For the 1991-92 season with Sacramento, Spud had his best year, averaging 16 points and 2.5 assists per game.

Greg Grant, at just 5’7”, played for six different teams over his seven-year NBA career (1989-1996). The Philadelphia 76ers, Phoenix Suns, Denver Nuggets, New York Knicks, Charlotte Hornets, and Washington Bullets all employed Grant at some point during those years. His statistics never jumped off the table, but Grant was able to last so long in the league thanks to his outstanding energy and effort.

Standing 5’7”, Louis “Herm” Klotz only played one NBA season (1947-1948), and it was early on in the history of the league when it was still the BAA. Klotz only scored 15 total points and had 7 assists in his 11 games played. While his professional basketball career did not amount to much, Klotz did go on to create one of the more famous basketball teams in history with the Washington Generals. The Generals regularly compete against the Harlem Globetrotters, and while they almost never win, they have been providing entertainment to fans for many years.

At 5’7,” Wataru “Wat” Misaka was a trailblazer in his own right. Wat only played in three games and scored seven total points for the Knicks in his short 1947 career. While that is not much on the surface, Wataru was both the first non-Caucasian player and the first Asian American to play in the BAA/NBA. During his college days at the University of Utah, Misaka helped lead the Utes to a national championship in 1944.

A key contributor to North Carolina State’s national championship team in 1974, Monte Towe would go on to make it to the NBA at just 5 ’7." Towe played two seasons for the Denver Nuggets from 1975-77, the first of which was in the American Basketball Association (ABA) before they joined the NBA in 1976. In 115 games with the team, Towe averaged only 2.8 points and 1.9 assists per game.

Standing at 5 ’7", Keith Jennings played in the NBA from 1992 to 1995. All three of his seasons were spent with the Golden State Warriors, and he averaged 6.6 points and 3.7 assists in his 164 games played. Despite his relatively short NBA career, Jennings would go on to play professional basketball in several leagues around the world, playing in Germany, Turkey, France, Spain, and Russia.

Charlie Criss rounds out the shortest players in NBA history at 5 '8". Criss had a long, playing nine seasons from 1977-1985 for three different teams. His career averages were 8.5 points and 3.2 assists, highlighted by highs of 10.8 points in 1982 and 4.3 assists in 1981. It was a long journey to the NBA after college at New Mexico State for Criss, as it took him seven years before finally making it to the league.

Who is the tallest NBA basketball player ever?

At 7’7,” the two tallest players in NBA history are Manute Bol and Gheorghe Mureșan.  Bol played ten NBA seasons (1986-1995) for four different teams, while Mureșan played for two teams over his eight-year NBA career (1993-2000). The two of them beat out four players who are tied for second at 7‘6” (Shawn Bradley, Yao Ming, Tacko Fall, and Slavko Vranes).