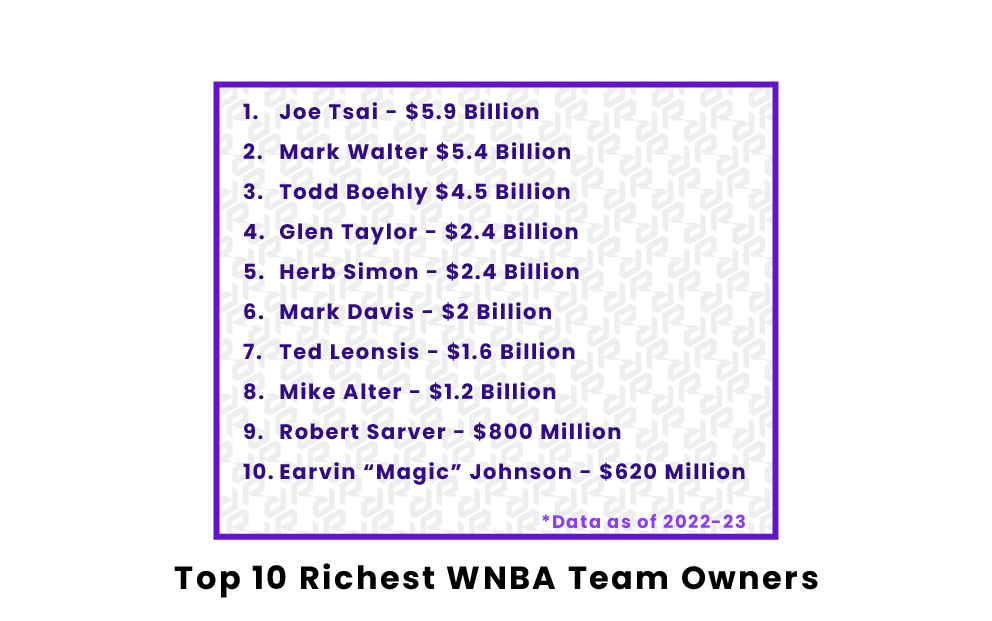 The WNBA is not as lucrative as the NBA, resulting in lower team values. However, owning a WNBA franchise is just as exciting and rewarding as in any professional league. Who is buying these teams and how much are those people worth? Keep reading to find out!

Who are the richest WNBA Owners currently?

Joe Tsai is a co-founder of China’s biggest e-commerce company, Alibaba Group. Alibaba is responsible for around 70% of mail packages in China. At his highest, Joe Tsai was worth nearly $15 billion but over the past two years has only a net worth of $5.9 billion. He is the owner of the New York Liberty and also the Brooklyn Nets. The Nets have slowly become his most valuable asset, as they are now worth $3.5 billion on their own. He has been the owner of the Liberty since 2019.

Owner of the LA Dodgers, and part owner of the LA Sparks, Mark Walter is worth $5.4 billion. He started his career as the CEO of the Investment Firm Guggenheim partners, which in itself has created $300 billion in assets. He has also put himself on the map in the investment world, investing in Beyond Meat and Carvana. He is the lead man in the investment group that bought the Dodgers and Sparks. That group includes others on the list, including Todd Boehly and Magic Johnson.

Todd Boehly, a part owner of the Los Angeles Sparks, is worth $4.5 billion. At the beginning of his career, he was part of the Guggenheim partners. After spending 14 years there, by 2015, he was ready to move onto something bigger. It was at this time that he and a group of other investors, including the likes of Earvin “Magic” Johnson, bought the Los Angeles Dodgers. He has also been heavily involved in the Chelsea acquisition which itself is worth $4.8 dollars. He has a large stake in the LA Lakers as well.

Glen Taylor is a brilliant businessman that turned a $2 million company into a multi-billion dollar one. Since 1999 he has been the owner of the Minnesota Lynx and is worth $2.4 billion. Early in his career, he purchased a $2 million wedding service, which he changed into a printing firm. Over time that company ballooned into one that is worth nearly $2 billion. In 2015, however, he stepped down as CEO. He owns not only the Lynx but also Minnesota’s Timberwolves and the United FC soccer team.

Herbert Simon, the owner of the Indiana Pacers and the Indiana Fever, is worth $2.4 billion. Most of his money comes from his real estate career, which he built for decades until he finally bought the Indiana Pacers along with his brother in 1983. After 15 years, Simon bought the Fever, leaving him with control over the Indiana professional basketball scene. More recently, he bought an American book review magazine called Kirkus Reviews. He plans to leave his son both basketball teams after he passes.

Mark Davis, known for owning the Las Vegas Raiders, is also the owner of the WNBA’s Las Vegas Aces. Over his career he has amassed a net worth of nearly $2 billion. His wealth, however, has been passed down from his late father. His parents were the owners of the Oakland Raiders, and in 2011 Mark was given control over the Raiders, then worth $750 million. Through Mark’s hard work, he has made the Raiders now worth somewhere between $7-8 billion. He has just recently purchased the Aces in 2021 and hopes to have the same success that he has had with the Raiders.

Theodore “Ted” Leonsis is the owner of the Washington Mystics. His net worth is roughly $1.6 billion dollars. He is the CEO of Monumental Sports, a company that owns several teams and their respective arenas in the Washington, D.C., area. Those teams include the Washington Wizards, Capitals, and Mystics. The company also owns the Capital One Arena in which the Wizards and Capitals both play. Leonsis first started to build his wealth at AOL, where he was a senior executive for nearly 14 years.

Mike Alter has been the owner of the 2021 WNBA champion Chicago Sky since 2005 and is worth around $1.2 billion. He has had an illustrious career in real estate, which has made him a tremendous amount of money, but more recently has moved into non-profit businesses. He is the owner of the Alter Group, which is a company that is trying to help as many people as possible.

Robert Sarver is the owner of the Phoenix Suns, which he bought for $400 million with the help of some investors, and in 2004 purchased the Phoenix Mercury. He is worth around $800 million and has made much of his money through the starting of many banks. Sarver is also a part of the Board of Trustees of the Sarver Heart Center in Tucson, Arizona. Sarver is a sports fanatic, having also purchased the RCD Mallorca, a Spanish second-division soccer team.

Magic Johnson was an NBA superstar in the 1980s. He played for the Los Angeles Lakers for thirteen seasons and won five NBA championships.  He is worth approximately $620 million and is a part owner of the Los Angeles Sparks. He is also a part owner of the Los Angeles Dodgers. He has also worked within the Lakers organization as president of basketball operations. Although he has had a lucrative career in the basketball world, he has increased his net worth with his investments and real estate properties.

Do any women own a WNBA team?

While most owners in the WNBA are men, there are a significant number of female owners. The Seattle Storm have three owners, all of which are female. The purchase was a proud movement in 2000, and they are still the only purely female-owned team. There are other women in an ownership position, such as Sheila Johnson for the Mystics and Suzanne Abrair for the Dream.

Who is the youngest WNBA team owner?

The youngest WNBA team owner is Renee Montgomery. She is a former player and is just 36 years old, yet she is a part owner of the Atlanta Dream. She owns the Dream along with Larry Gottensdiener. She had an 11-year career and won two championships during her time in the league. Although she was not the first former player to own a team, as Lisa Leslie was, she is the youngest current owner.