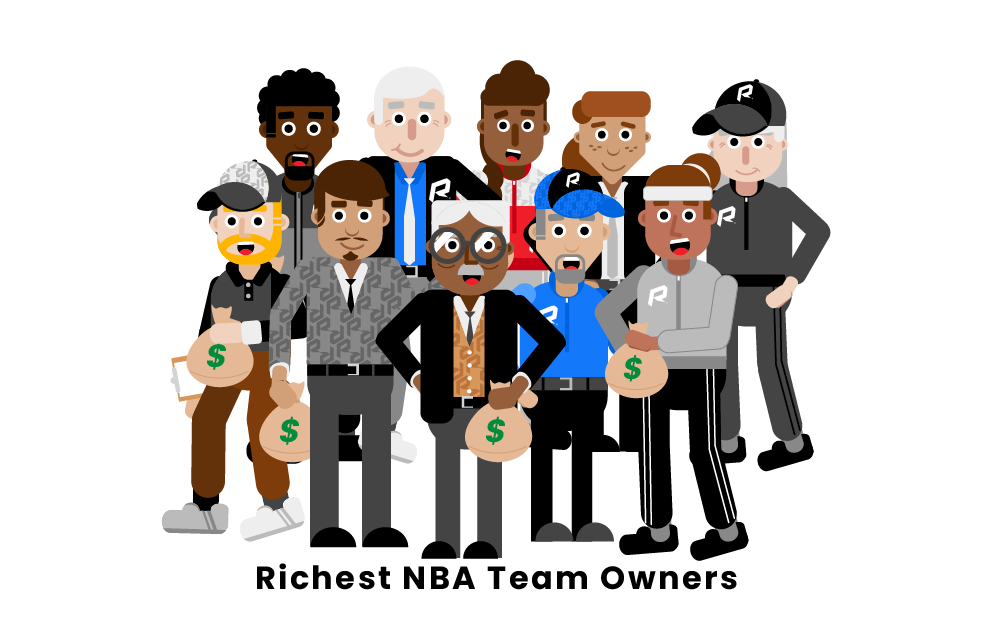 The NBA is the world’s top basketball league, attracting a giant fanbase. Millions of people tune in every year to support their favorite teams and athletes. Among the fans includes some of the richest people on earth, buying NBA teams as investments. Here is a list of the NBA’s richest team owners and how they made their fortunes.

Who Are The Richest NBA Owners Currently?

Steve Ballmer’s net worth is estimated at over $85 billion, easily making him the richest NBA team owner in the league. After dropping out of college, Ballmer joined Microsoft in 1980, one of the world’s leading technology companies, becoming its 30th employee. Ballmer stayed with the company throughout his career, eventually becoming the CEO from 2000 to 2014. After retiring from the company in 2014, Steve Ballmer purchased the Los Angeles Clippers for a whopping $2 billion. Since his retirement from Microsoft, Ballmer has invested billions of dollars into charities and philanthropic activities on the side.

Jody Allen’s net worth is estimated at around $20 billion, making her the second richest NBA team owner. Currently, Jody Allen is the owner of the Portland Trail Blazers. Allen came into her wealth following the death of her brother, Paul Allen. Paul Allen was one of Microsoft’s co-founders. On the side, Paul Allen liked to donate a large portion of his wealth to charitable efforts. In 1986, Paul and Jody Allen co-founded Vulcan Inc., a wealth company that would manage their family’s income and philanthropic efforts. Following her brother’s death, Jody remained committed to his charitable missions.

As the third richest NBA team owner, Robert Pera’s net worth is $18.3 billion. In 2012, Robert Pera bought the Memphis Grizzlies, making him the youngest NBA team owner in history. When he was younger, Pera attended the University of California at San Diego, where he studied electrical engineering and Japanese. Following his graduation, Robert Pera began his career working for Apple, though shortly after, he founded the company Ubiquiti Networks, a wireless equipment manufacturer. Pera remains the CEO of the company and also owns three-quarters of its public shares. Pera is largely known for being entirely self-made.

Daniel Gilbert has amassed a net worth of $18 billion, making him the fourth richest NBA team owner. In 1985 at just 22 years of age, Gilbert created the company Quicken Loans, which soon became the largest mortgage lending company in the country. On the side, Daniel Gilbert and his partners have invested over $5 billion into real estate development, focusing on redeveloping parts of Detroit. If Gilbert wasn’t already successful enough, he co-founded StockX in 2019, a sneaker reselling website, which is now worth over $3 billion alone. Among other endeavors, Daniel Gilbert purchased a majority stake in the Cleveland Cavaliers in 2005. Daniel Gilbert is also renowned for his fully self-made and entrepreneurial character.

Ann Walton Kroenke’s net worth is estimated to be $8.3 billion, placing her as the fifth richest NBA team owner. The daughter of Bud Walton, a co-founder of Walmart, Ann Walton Kroenke inherited her father’s Walmart holdings in 1995 after he passed away. Though, Ann Walton Kroenke does not have an active role in the company at this time. In 1974, Ann Walton married Stan Kroenke, a billionaire owner of multiple sports teams. Currently, Ann Walton Kroenke owns the Denver Nuggets of the NBA, as well as the Colorado Avalanche of the NHL.

Joseph Tsai is the sole owner of the Brooklyn Nets, having an estimated net worth of $8.3 billion. The 58 year old billionaire was originally born in Taiwan but now is a Canadian citizen. Tsai attended Yale University, where he studied economics, Asian studies, and law. Though, he made his fortune after co-founding the online retail and supply powerhouse Alibaba. Currently, Joseph Tsai is the chairman of the Alibaba group and holds the second largest number of company shares. Tsai now lives in Hong Kong, and is the region’s ninth richest inhabitant. Globally, Tsai is the 254th richest billionaire.

Tom Gores has an approximate net worth of $6.1 billion, making him the seventh richest NBA team owner and the 403rd richest person in the world. When Gores was four years old, his family moved from Israel to Michigan, where he helped out at his dad’s food store in his free time. Tom Gores now owns a wildly successful private equity firm in California, where he manages the wealth of over 40 companies. In 2015, Tom Gores became the sole owner of the Detroit Pistons, after being a partial owner since 2011.

Antony Ressler has a net worth of $5.8 billion, making him the eighth richest NBA team owner. Before becoming a billionaire, Ressler worked on Wall Street. Similar to Tom Gores, Antony Ressler made his fortune through the private equity business. In 1990, Ressler co-founded the private equity firm Apollo Global with his brother-in-law. Later, in 1997, Ressler also founded Ares Management, another wealth company. Ressler currently owns the Atlanta Hawks of the NBA, and partially owns the Milwaukee Brewers, an MLB team. Ressler is recognized for his philanthropic efforts, having donated millions to museums and healthcare facilities.

Micky Arison is the owner of the Miami Heat and has a net worth of $5.5 billion. He was born in Tel Aviv but moved to the United States when he was still a child. His father, Ted Arison, co-founded one of the leading cruise companies, Carnival Cruises. At the time of the company’s founding, Micky Arison dropped out of the University of Miami, opting to work for his dad instead. Micky was Carnival Cruises’ chairman for over 30 years before moving on from the role and remaining as a company chairman. In 1995, Micky also took over control of the Miami Heat from his father.

Joshua Harris has an estimated net worth of $5.5 billion, making him the tenth richest NBA team owner. Harris attended the University of Pennsylvania and later Harvard University, where he received his MBA. Along with Anthony Ressler, Joshua Harris co-founded Apollo Global in 1997, a private equity company. Harris made his fortune with Apollo Global, later purchasing the Philadelphia 76ers basketball team, as well as buying stakes in the New Jersey Devils, Pittsburgh Steelers, and Crystal Palace F.C., a successful soccer team in the English Premier League.

Who is the richest NBA Team owner?

The richest NBA team owner is Steven Ballmer, owner of the Los Angeles Clippers. Ballmer’s net worth is estimated at $82.6 billion. Ballmer purchased the team for $2 billion in 2014. Steven Ballmer co-founded the technology giant Microsoft in 1980 after dropping out of college. Ballmer stayed with the company, eventually becoming the CEO and holding the position for 14 years. After stepping down from his role at Microsoft in 2014, Steve Ballmer purchased the Los Angeles Clippers.

Who is the youngest NBA Team owner?

The youngest NBA team owner is Robert Pera. The 44 year old billionaire with an estimated net worth of $17.6 billion purchased the Memphis Grizzlies in 2012, making him the youngest NBA team owner. After studying electrical engineering and Japanese, Pera made his fortune by founding the wireless equipment company Ubiquiti Networks. Pera remains the CEO of Ubiquiti Networks and owns three-quarters of the company’s shares. He is renowned for his fully self-made billionaire status and his success at a young age.