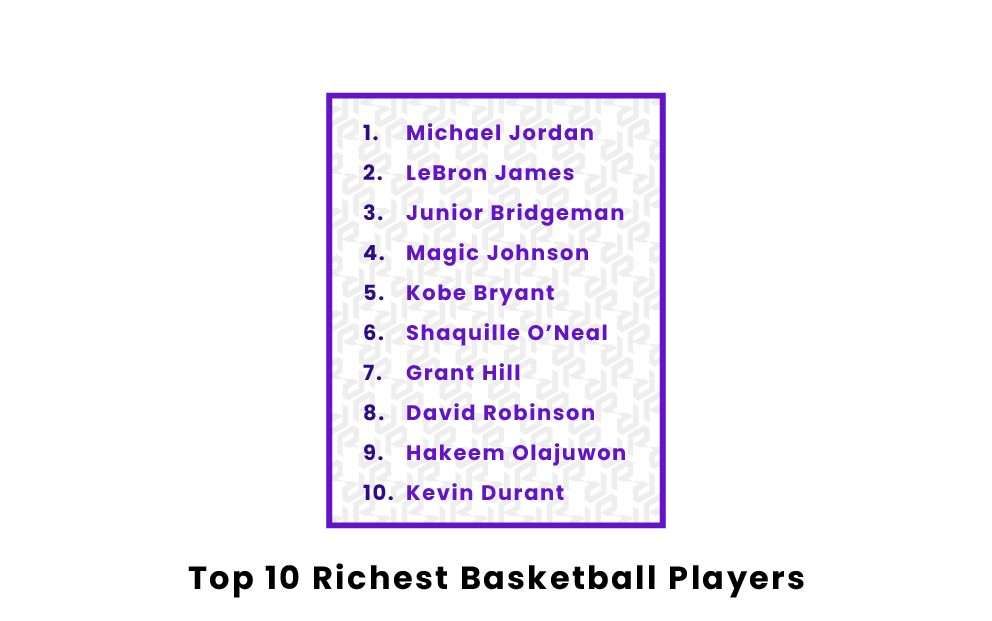 Who are the richest basketball players?

With an estimated net worth of $2.1 billion, Michael Jordan has more than triple the net worth of the next player on this list. During his basketball career, Jordan accumulated a total of $94 million solely from his contracts with the Chicago Bulls and Washington Wizards. Along with being arguably the best player to ever pick up a basketball, he also owns his own shoe brand that is very popular with basketball fans. Last year alone, the Jordan shoe brand racked up $3.1 billion in sales, which was about 8% of the company's total sales.

This player on the list is different from the rest of the players that will follow him. Junior Bridgeman was a pretty good guard for the Bucks during the late 1970s and 1980s, playing 12 years with the team. He was not a superstar in any way but was a solid and consistent player for the team. During his career, he studied Wendy's to learn all about the business and owning three franchises. After his retirement, seeing the success of his restaurants, he decided to invest in Wendy's and opened up 160 new restaurants. Along with his Wendy's venture, Bridgeman also decided to invest in Chili's and opened up 120 franchises with them. Bridgeman can thank his business skills and investments for his $600 million net worth rather than his basketball career in the NBA.

Magic Johnson obviously can thank his NBA career for his introduction to stardom but his true money making ventures did not happen until after his retirement. One of the greatest players of all time, Johnson was the centerpiece of some of the best Lakers teams ever. He was able to earn upwards of $40 million throughout his playing career, even signing the largest contract in sports history at one point. At one time, Johnson owned 125 Starbucks locations as well as having investments in a couple financial services. Johnson reportedly made between $50 and $60 million from a transaction of 4% stake in the Lakers organization and has also invested a similar amount in the Los Angeles Dodgers organization in the MLB. All of these business ventures have helped to sky rocket Johnson's net worth to be an estimated $600 million.

Along with his contracts, Lebron is also a great business investor. Lebron has investments with Beats Electronics, has stakes in the Fenway ownership group and the Liverpool Football Club, and also has investments with Blaze Pizza. Not to mention that Lebron also has a lifetime deal with Nike that is set to make him at least $1 billion when it is all set and done. All of these investments and contracts from Lebron have contributed to his net worth of around $480 million.

Shaquille O'Neal may have one of the best personalities of any player to play in the NBA. Therefore, there is no surprise how much he racks in from endorsements alone. Along with all of his endorsements, Shaq also made a whopping $300 million during his 19 year career. After his retirement, is when Shaq turned into the genius businessman that he is today. At one point after his retirement, Shaq owned 155 Five Guys restaurants, 17 Auntie Anne's locations, a Krispy Kreme franchise, and a Big Chicken in Las Vegas. He also recently invested in nine Papa John's locations and received an endorsement contract with the company. These are not all of his investments though, which also include 40 24-hour fitness locations and 150 car washes. Other companies Shaq has money in also include the Sacramento Kings, Google, and Ring.

Not only does Shaq earn a lot of money from his investments, he also endorses many products on television and is an NBA analyst on Inside the NBA. All of these mentioned businesses and investments above help to push Shaq's net worth up to around $400 million.

David Robinson was a tough and rugged naval officer who later turned into a top power forward of all time. Nicknamed 'The Admiral' because of his military background, was able to win two NBA titles and play 14 seasons with the San Antonio Spurs. Even though he was able to rack up $118 million during his career in basketball, his true success did not come until after his retirement from the NBA.

After his retirement, Robinson started a private equity fund which helped to raise $115 million after its launch in 2007. He acquired many real estate assets that were worth upwards of $350 million. Also, one of his first investments after retirement was investing in the San Antonio Spurs by purchasing 1.88 percent equity stake in the team. All of these investments by The Admiral have helped to raise his net worth to be projected at around $200 million.

Hakeem 'The Dream' Olajuwon was one of the most athletic players of his generation that was able to produce two championships for the Houston Rockets and some of the most memorable stat lines ever. The 12 time all star and olympic gold medal winner recorded the illustrious quadruple double during his career and was able to bring in just about $107 million during his career. His career earnings were the backbone of reaching a net worth of around $200 million but his post retirement investments are what really skyrocketed The Dream to the top.

In 2011, he launched his clothing line, DR34M, based on his nickname and number during his career. Olajuwon also has many real estate investments that have reportedly earned him around $100 million and has endorsement deals with Etonic, LA Gear, and Spalding.

Grant Hill was a great and hard working player throughout his 19 year career in the NBA accumulating enough money to both invest and co-own an NBA franchise. Throughout his career, Hill had many lucrative endorsement opportunities with Sprite and McDonald's as well as Fila, Adidas, Nike, and AT&T. After his retirement is when Hill really began racking in the money.

In 2015 Hill came on as part of the announcing crew by CBS and Turner Sports for the NCAA Men's basketball tournament. Hill also opened up his own business venture company to invest in multi unit family housing projects.The $140 million that Grant Hill made during his career as well as his endorsements, acting work, and investments has helped to skyrocket his net worth upwards of $180 million.

By the end of his career, Kevin Durant will go down as one of the top five best players to ever pick up a basketball. He is one of the best natural scorers that the league has ever seen which is why when his current contract with the Nets ends, he will have made around $350 million throughout his career. Along with his stellar contracts that he has signed during his career, Durant also holds many endorsement deals with companies such as Nike, Alaska Airlines, and also American Family Insurance. Intelligently, Durant also invested some of his money in about 50 companies that include Postmates, Acorns, Lime, and Master & Dynamic. All of these business ventures and contracts signed by Kevin Durant have helped to boost his net worth to around $170 million.

James Harden is a prolific scorer and has one of the cleanest shots in all of the league. By the end of his current contract with the Houston Rockets, Harden will have earned upwards of $228 million from his base contract as well as extra incentives and bonuses. Along with his hefty contract, Harden has one of the deepest and richest endorsement portfolios in the league.

Using his fortune, he invested in both the Major League Soccer team from Houston, the Houston Dynamo, as well as the National Women's Soccer League, the Houston Dash. Harden recently signed a 13 year deal with Adidas and his other endorsement deals include deals with Trolli, Stance Socks, Beats Electronics, State Farm, and Body Armour. All of these endorsement deals and investment opportunities have helped to propel Harden to a net worth of $165 million.

What is the highest paying NBA contract of all time?

Who has earned the most money from their NBA career?

NBA contracts have recently become more lucrative with the passing of the most recent collective bargaining agreements. Recently, even some of the league's lesser known players are signing contracts worth hundreds of millions of dollars. However, nobody in NBA history has ever made more during his career than the great Kevin Garnett. During his NBA career Garnett was able to rack up around $334 million topping Kobe Bryant by about $10 million. Lebron James, Shaquille O'Neal, and Kevin Durant help to round out some of the other top spots on the list.

How many players on this list are still playing today?

On this list there are three players that still remain active in the NBA. Lebron James, who is one of the greatest basketball players of all time, has about three years remaining on his contract with the Los Angeles Lakers. It is believed that after this contract is completed he will either elect to retire or try to sign with the team that decides to draft his son. Along with James, James Harden and Kevin Durant are also still active in the league. Durant currently plays with the Nets after leaving the Warriors in the offseason and James Harden has played with the Rockets for the last eight seasons.

These players are the richest players to ever pick up a basketball in the NBA. But the big question in sports is if money equates to winning championships. On this list, there are some of the greatest players in basketball history who have also been smart enough to invest their money after their career is over. On this list alone, with the ten players listed there have been a total of 24 NBA championships among them. So in this case, the more money players make, the more championships they will win.