Top 10 NBA Rivalries of All Time 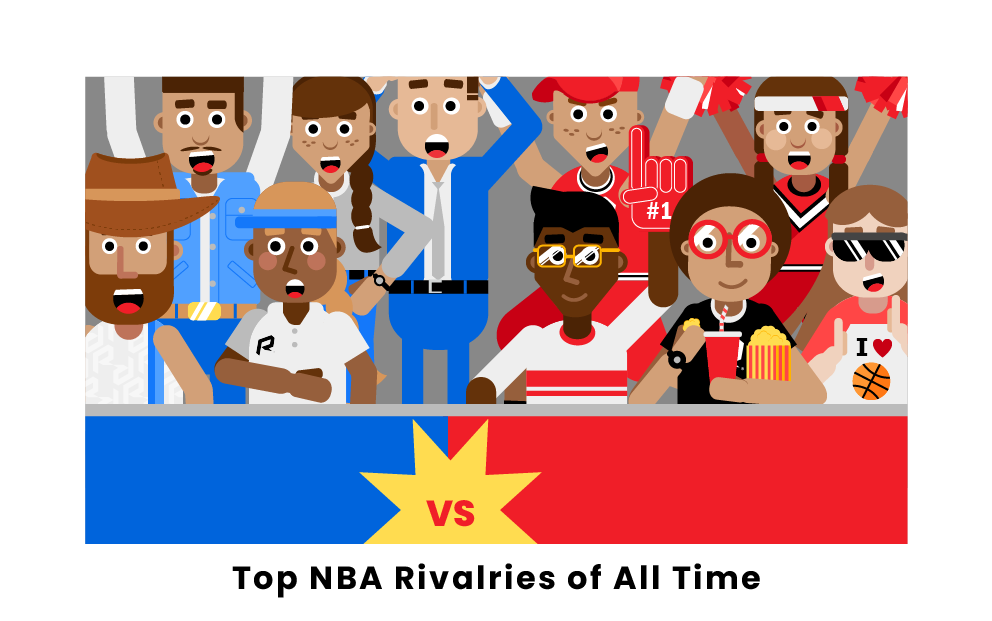 The NBA thrives on rivalries. Many rivalries are built on historical significance, geographical proximity, intense playoff battles, and mutual disdain between fanbases. Regardless of how they have formed, NBA rivalries have provided some of the most thrilling matchups we’ve seen over the years. Keep reading to learn about the top ten NBA rivalries of all time.

What are the biggest NBA rivalries of all time?

The Los Angeles Lakers vs. the Boston Celtics is the most historic rivalry in the NBA. The two teams squared off for the first time in 1948, which was the first of hundreds of contests between the franchises. Over the next 70 years, the two teams dominated the NBA, usually rivaled only by each other. The Lakers and Celtics have faced off 12 times in the NBA finals, which is by far a record. They also are tied for the most NBA championships ever with 17 apiece.

Of the 74 championships in NBA history, 34 have been won by either the Lakers or the Celtics. That’s 45% of all championships made up by just two teams!

The Chicago Bulls and Detroit Pistons rivalry is largely based on geography. Chicago and Detroit are fairly close to one another and thus have rivalries in most major American sports. The Pistons-Bulls rivalry was created during the Bulls’ Michael Jordan era, making them the most feared team in the league. The Pistons were fierce contenders at the time, with the nickname “The Bad Boys” for their up-and-coming squad.

Despite Jordan’s greatness, the Pistons held off the Bulls throughout the 1970s and 1980s. Finally, in 1991 the Bulls had their moment. By sweeping the Pistons 4-0 in the Eastern Conference Finals, the Bulls advanced to the NBA Championship. The Bulls would win their first title that year.

Cleveland was led by Lebron James, with a supporting cast of J.R. Smith, Kyrie Irving, and Kevin Love. Golden State was led during this time by Stephen Curry, along with Klay Thompson, Draymond Green, Andre Iguodala, and eventually Kevin Durant.

The 2016 NBA Finals were particularly memorable; they saw many records broken and featured a dramatic finish. In game five, Lebron James and Kyrie Irving became the only teammates to both score 40-plus points each in an NBA finals game. James also became the first player to score over 40 points in back-to-back games in the NBA finals. After leading all players in points, rebounds, assists, steals, and blocks in the finals, the Cavaliers came back from a 3-1 deficit in the finals, a feat that had never been done before. Lebron James’ performance led to him unanimously winning Finals MVP.

After 2016, the Warriors recruited superstar Kevin Durant from the Oklahoma City Thunder. This changed the dynamic of the matchup between the Warriors and Cavaliers, as Golden State now boasted too much skill to be beaten. The Warriors beat the Cavaliers in 5 games in the 2017 NBA Finals and just four games in the 2018 NBA finals.

The Chicago Bulls and New York Knicks have a gritty, historic rivalry. The two teams have played each other hundreds of times since the Bulls joined the NBA in 1966. The rivalry peaked during Michael Jordan’s dominance of the league, as the two teams faced off six times in the playoffs between 1989 and 1996. The Bulls got the better of the Knicks, winning five of the six playoff matchups.

Michael Jordan and Scottie Pippen led the Bulls during this era. On the other side, the Knicks were led by Patrick Ewing and John Starks.

Since the retirements of Jordan, Pippen, Ewings, and Starks, neither team has matched the success they saw in the 1990s. The two squads have yet to face off in the playoffs ever since, though their regular-season matchups often have a flair for the dramatic.

The Knicks and Pacers have been rivals since the late 1970s. The two franchises have met up in the playoffs seven times, including three years in a row in 1993-1995 and 1998-2000. This eight-year span, where Indiana and New York clashed six times, defined the rivalry.

Screenwriter and director Spike Lee found his way into the rivalry, feuding with Pacers star Reggie Miller. Miller thrived in the face of his rivals and was eventually coined the nickname “The Knick-Killer.”

When people think of the Lakers’ rivals, their first thought is the Boston Celtics. However, the 76ers actually have a rich history of hatred with Los Angeles. The rivalry was mainly formed in the early 1980s when the two franchises faced off in the NBA finals three times in four years.

In 1980 and 1981, Los Angeles defeated the 76ers to win the NBA title. However, Philadelphia got its revenge in 1983. The teams met one more time in the finals, in 2001. The Lakers won that series, but the 76ers were the only team to beat the Lakers that postseason.

The Heat and Knicks met for the first time in 1989, though their rivalry was formed in the late 1990s. Between 1997 and 2000, the Knicks and Heat clashed in the playoffs four consecutive times.

The Knicks got the better of the Heat, taking home three of those four playoff series. However, each matchup was tightly contested: each series went to seven games. This marked the first time two NBA teams ever played each other four years in a row in the playoffs.

The rivalry was known for low-scoring contests, with tight and physical defense. In the years leading up to 2000, the two franchises both respected and detested one another. However, after the turn of the century, the Knicks moved in a new direction, trading away star Patrick Ewing. This resulted in a sharp decline in the rivalry, as the Knicks struggled to keep up with the Heat over the coming years.

The Lakers made a lot of foes throughout their years of dominance, and the Spurs were undoubtedly one of them. The Spurs were beaten down by the Lakers several times before they had a taste of glory.

When the Lakers and Spurs faced off in the Western Conference Semifinals in 1995, they had already played each other in four playoff series. The Lakers won each of those initial four matchups, setting the scene for a dramatic revenge tour in 1995. Sure enough, the Spurs won the series in six games in 1995, before losing to the Rockets in the Western Conference Finals.

The Celtics and Pistons have both been in the NBA for a long time and have garnered respect with their numerous NBA finals appearances. Their rivalry peaked between 1985 and 1991, a span during which the two squads faced off five times.

Boston won the first two of those playoff matchups in 1985 and 1987. Detroit took the other three series in 1988, 1989, and 1991. Detroit advanced to the NBA Finals each time they defeated the Celtics over that stretch.

During the rivalry, the Celtics’ stars were Larry Bird, Kevin McHale, and Robert Parish. The Pistons were led mainly by Dennis Rodman and Isiah Thomas.

What is the biggest NBA rivalry?

The biggest NBA rivalry is the Boston Celtics vs. the Los Angeles Lakers. These franchises both have many enemies, but none greater than one another. The two franchises are the most successful in NBA history, playing a huge part in their constant competition. Each has won an NBA-record 17 championships, and the race is on for an 18th.

The most modern NBA rivalry is the Cleveland Cavaliers and the Golden State Warriors. This results from the two franchises facing off in four straight NBA Finals between 2015 and 2018.

What is the oldest NBA rivalry?

The oldest NBA rivalry is the Boston Celtics vs. the Los Angeles Lakers. The teams first clashed back in 1959. During the 1960s, the Celtics and Lakers faced off in the NBA finals six times, solidifying the rivalry. Boston and Los Angeles have been rivals for longer than most NBA teams have even existed.

Bill Russel was the most famous player for the Celtics back when this rivalry started. Meanwhile, the Lakers were led by the likes of Elgin Baylor and Jerry West. Since then, various stars for both teams have kept the rivalry alive, including Earvin “Magic” Johnson, Larry Bird, Kobe Bryant, Paul Pierce, and many more.

Was there a rivalry between Bill Russell and Wilt Chamberlain?

Bill Russell and Wilt Chamberlain had perhaps the most notable player-on-player NBA rivalry. Russell was a bonafide winner, securing 11 NBA championships during his career. Chamberlain was a more terrific scorer but did not enjoy the same success as Russell. This is mainly because Russell’s Celtics squads had impressive depth. Alternatively, Chamberlain was typically the lone star on his roster. Despite having a fierce rivalry on the court, the two greatly respected each other. While many fans portrayed them as enemies, the two were actually good friends.

Pages Related to Top 10 NBA Rivalries of All Time