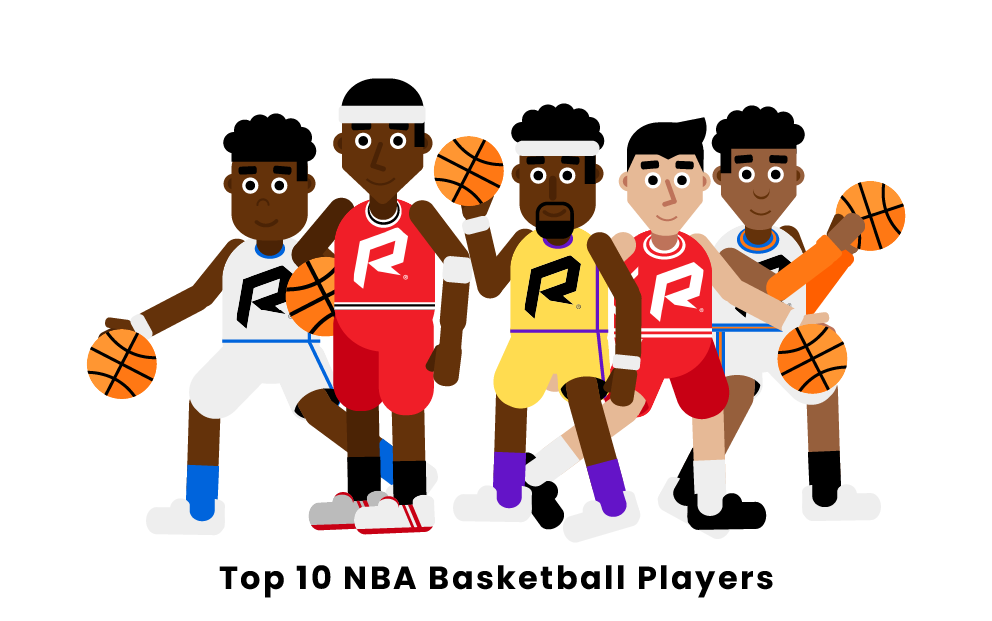 Who are the most popular current NBA basketball players?

Aside from championship seasons, James has played in the NBA All-Star Game every season since 2005, has won the NBA MVP award in four different seasons, and has won two gold medals in the Summer Olympics. To top it all off, James is currently in third place on the NBA all-time scoring list.

Giannis Antetokounmpo, nicknamed the “Greek Freak,” was drafted 15th overall by the Miluakee Bucks in 2013. During his first season with the Bucks, Antetokounmpo recorded a rookie high 61 blocks. He also earned a spot in the Rising Stars Challenge during the NBA All-Star weekend and made the All-Rookie NBA Second Team. In the 2015-2016 season, Antetokounmpo became the youngest player in Bucks history to record a triple-double at age 21.

Kawhi Leonard, also known as “The Klaw” because of his large hands and impressive defensive play, is a small forward/shooting guard for the Los Angeles Clippers. In 2011, Leonard was drafted 15th overall by the Indiana Pacers but was shortly after traded to the San Antonio Spurs. As a rookie, he made the All-NBA Rookie First Team.

In the following seasons, Leonard went to two NBA championships with the Spurs and won the 2014 NBA Finals where he was named Finals MVP. He also earned NBA Defensive Player of the Year in two consecutive seasons (2014-2016) and was chosen for the NBA All-Star game for the first time in 2016. In July 2018, Leonard was traded to the Toronto Raptors where he led the team to its first NBA championship and was awarded Finals MVP. After only one season with the Raptors, he moved to Los Angeles to play for the Clippers.

Kevin Durant is a guard/forward for the Brooklyn Nets. He was drafted in 2007 by the Seattle Supersonics who later became the Oklahoma City Thunder. In his first season, Durant was awarded Rookie of the Year, scoring over 20 points per game. During his time with the Thunder, Durant won four NBA scoring titles, led the team to the NBA Finals in 2012, and was awarded the NBA MVP award in the 2013-2014 season.

In July of 2016, Durant left the Thunder to sign with the Golden State Warriors. As a Warrior, he helped the team to win two consecutive NBA championships (2016-2018) and was awarded NBA Finals MVP in both Finals appearances. After a successful run with the Warriors, Durant signed with the Brooklyn Nets in the 2019-2020 season.

Throughout his professional career, Durant has been selected to the NBA All-Star Game ten times and has gotten two gold medals in the Summer Olympics.

James Harden is a guard for the Houston Rockets. He was selected at number three overall in the 2009 NBA Draft by the Oklahoma City Thunder. In his first season, Harden earned a spot on the All-Rookie Second Team. In the 2011-2012 season, he was awarded the NBA Sixth Man of the Year Award and made it to the NBA finals with the Thunder. Harden was traded to the Houston Rockets in October 2012.

On the Rockets, Harden was selected to the NBA All-Star game in six straight seasons and was awarded the NBA MVP award in 2018. He also helped the Rockets reach the playoffs seven seasons straight (2012-2019). Aside from this, Harden has put on numerous impressive scoring performances including scoring at least 30 points in 32 consecutive games and becoming the first NBA player to score 60 points and record a triple-double in a single game.

Anthony Davis is a forward/center for the Los Angeles Lakers. He was selected first by the New Orleans Hornets (now the New Orleans Pelicans) in the 2012 NBA Draft. In his first season, Davis was selected to the NBA All-Rookie First Team. In 2014, he appeared in his first NBA All-Star Game and also led the league with 2.82 blocks per game. The following season, Davis helped the Pelicans reach the playoffs. Because of this, he earned a spot on the All-NBA First Team and All-NBA Defensive Second Team.

Stephen Curry is a guard for the Golden State Warriors. He was drafted seventh by the Golden State Warriors in the 2009 NBA Draft. After his first season, Curry came in second place in voting for Rookie of the Year. In the 2012-2013, Curry proved he was an NBA star by making a record 272 three-pointers and led the Warriors to the playoffs. In the following seasons, he and the Warriors reached the NBA Finals in five consecutive seasons (2014-2019) and won three NBA titles. During their triumphant run, Curry set a new NBA record with 286 three-pointers in 2015 and was named NBA MVP in two consecutive seasons.

In addition to these successes, Curry has been selected for the NBA All-Star Game six times and won a gold medal in 2010 with the USA Men’s Basketball Senior National Team.

In his first year in the NBA, Doncic proved to be very talented and was awarded NBA Rookie of the Year. That season, he averaged 21.2 points per game and shot a three point percentage of 32.7%. During the 2019-2020 season, Doncic averaged 28.7 points per game with a field goal percentage of 46.1%. His impressive gameplay earned him a spot in the 2020 NBA All-Star Game.

Damian Lillard is a guard for the Portland Trail Blazers. Lillard was selected sixth overall by the Trail Blazers in the 2012 NBA Draft. In his first season, Lillard won the Skills Challenge during All-Star Weekend and was awarded NBA Rookie of the Month at the end of the season. The next season, he participated in five different events at All-Star Weekend and made the All-NBA third team.

In the following seasons, Lillard set numerous Trail Blazers records including being the fastest to record 1,500 career assists, 9,000 points, and 10,000 points. In addition, he set the NBA record of the fastest player to reach 600 three-point field goals in 2015. By the end of the 2017 season, Lillard earned a spot on the All-NBA First Team. In the 2018 season, he became the fastest Trail Blazer to score 12,000 points and led the team to Westen Conference Finals.

Russell Westbrook is a guard for the Houston Rockets. He was drafted fourth overall by the Seattle Supersonics/Oklahoma City Thunder in the 2008 NBA Draft. After an impressive first season, Westbrook was named to the NBA All-Rookie First Team. During the 2010-11 season, Westbrook helped the Thunder reach the Western Conference Finals and then the NBA Finals the next season.

Who are the 10 best current NBA players?

The 10 best current NBA players include:

Who is the best NBA basketball player?

Michael Jordan is widely considered the best NBA player of all time. Throughout his time in the NBA, Jordan led the Chicago Bulls to win six NBA Championships and was awarded the NBA Finals MVP in each appearance. In addition to his championship seasons, Jordan was named the NBA MVP five times, Rookie of the Year in 1985, made the All-NBA First Team 10 times, and made 14 NBA All-Star appearances.

LeBron James can be considered one of the best basketball players of all time and is the best player in 2020. Throughout his 17 seasons in the NBA, James has won three NBA championships. James has also been an NBA All-Star 16 times, NBA MVP four times, All-NBA First Team 12 times, and was awarded Rookie of the Year in 2004. This season, he is averaging 25.7 points, 7.9 rebounds, and 10.6 assists per game.