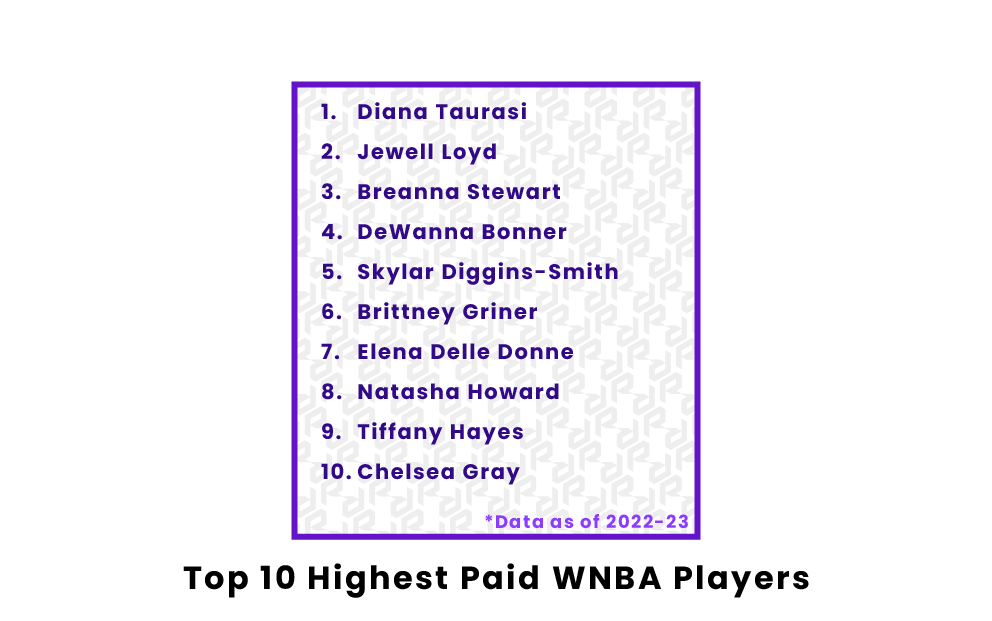 The Women’s National Basketball Association (WNBA) is a professional basketball league in the United States. As for salaries, the best players in the league can make over $225,000 a year. Below, the 10 highest-paid players from 2022 are listed and discussed.

Who are the Highest-Paid WNBA Players in the World?

In the WNBA, there were three players making the maximum salary of $228,094 in 2022, and one of those players is all-time great Diana Taurasi. Taurasi has played her entire career for the Phoenix Mercury since her first season in 2004. In those 18 seasons, she made 10 All-Star teams, won the MVP award in 2009, and won three WNBA championships (2007, 2009, and 2014). She also ranks first all-time in the WNBA in several statistical categories, including points scored, three-pointers made, free throws made, and field goals made.

The second of three players who made $228,094 in 2022 is Jewell Loyd. Jewell has played her entire career for the Seattle Storm since coming into the league in 2015. In her eight seasons, she won the Rookie of the Year Award in 2015, has made the All-Star team four times, and was a key contributor to two of Seattle’s four WNBA Championships, in 2018 and 2020. Over her career, she has averaged 15 points per game and made 36% of her three-point shot attempts.

Arguably the best player in the league currently, Breanna Stewart is the final of the three maximum-salary ($228,094) players in the WNBA in 2022. Like Loyd, Stewart has been a member of the Seattle Storm for her entire career. Since she came into the league, Stewart has won one MVP Award in 2018, made four All-Star teams in six seasons, and led the Storm to two WNBA titles in 2018 and 2020. In both of those championship finals, Stewart won the Finals MVP awards.

A teammate of Dianna Taurasi for many years, DeWanna Bonner takes the number four spot on this list with a salary of $227,900. She played her first 10 seasons for the Mercury from 2009-2019 (though she missed the 2017 season) before spending her last three seasons with the Connecticut Sun. In her career, she has made four All-Star teams and won two WNBA Championships in 2009 and 2014.

Also making $227,900 in salary, Skyler Diggins-Smith takes the next spot on this list. She played her first six seasons in the league, from 2013-2018, with the Tulsa Shock/Dallas Wings, before signing with the Phoenix Mercury and playing there in the last three seasons. Diggins-Smith is a six-time All-Star as well as the 2014 WNBA Most Improved Player, although she is the first player on our list who has yet to win a championship in her career.

The third of four players who made $227,900 in 2022 is Brittney Griner. Griner has played her entire career for the Phoenix Mercury since entering the league in 2013. She has made the All-Star team eight times, led the WNBA in points per game twice, and helped the Mercury win the championship in 2014. Griner’s career is currently in a bit of limbo, however, as she is currently imprisoned in Russia after being arrested for having cannabis oil in her luggage at the airport, a charge that the United States government has denounced as a case of wrongful imprisonment by the Russians.

Elena Delle Donne is the final player whose salary sat at the $227,900 mark for the 2022 season. Donne spent the first four seasons of her career with the Chicago Sky before spending the last five seasons with the Washington Mystics. She has won two MVP Awards in her nine seasons (2015 and 2019), as well as being selected to six All-Star teams, leading the league in scoring in 2015 and helping the Mystics to the WNBA championship in 2019.

The penultimate player on this list, Tiffany Hayes made $215,000 in 2022. She has spent her entire career with the Atlanta Dream since she came into the league in 2012. In those 10 seasons (she missed the 2020 season), she made one All-Star team in 2017 and was voted onto the WNBA First Team in 2018. While she has yet to win a WNBA Championship, she did win two championships in college while playing for the Connecticut Huskies in 2009 and 2010.

The final member of this list is Chelsea Gray of the Las Vegas Aces, whose 2022 salary sat at $206,267. When she entered the league in 2015, she spent her first season with the Connecticut Sun before joining the Los Angeles Sparks from 2017-2021 and finally coming to the Las Vegas Aces this past season. In her career, she has made four All-Star teams, won two WNBA titles (2016 and 2022), and won the Finals MVP Award for the championship run in 2022.

While the 10 players below did not quite make the top 10 in terms of salary, they still deserve recognition as honorable mentions. They are listed in alphabetical order by last name.

Who is the highest-paid WNBA Player?

There are three players in the WNBA who made the maximum salary of $228,094 in 2022: Dianna Taurasi, Jewell Loyd, and Breana Stewart. Stewart and Loyd were teammates on the Seattle Storm, while Taurasi is a long-time member of the Phoenix Mercury. After them, there are three players who are tied for the second-highest salary. DeWanna Bonner (Connecticut Sun), Skyler Diggins-Smith (Mercury), and Brittney Griner (Mercury) each made $227,900 last season.