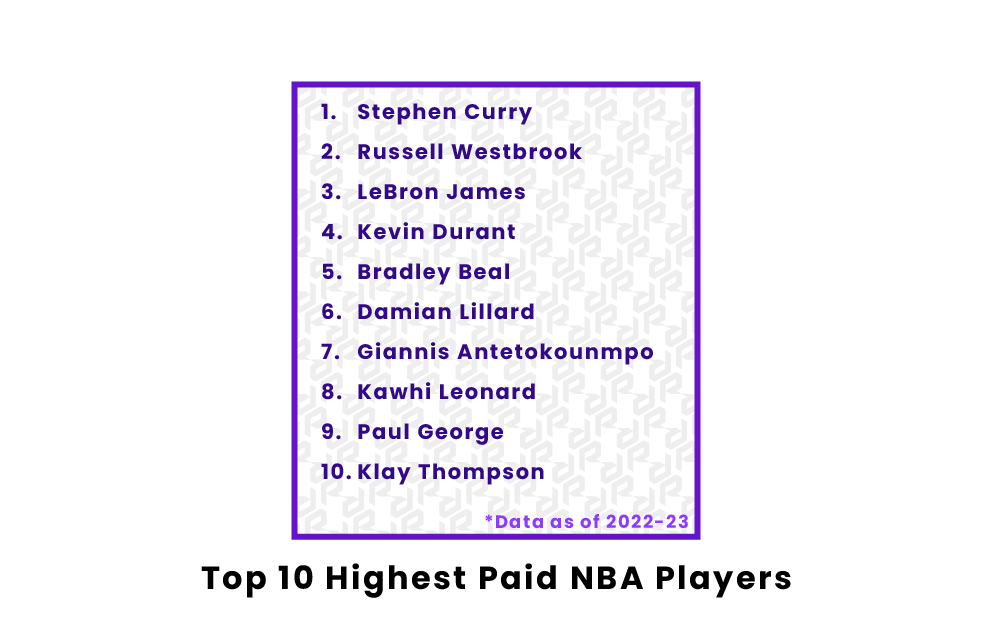 The average salary of an NBA player in 2022 was $8.5 million, making it the sport with the highest annual salary in the United States. Players in this sport can earn nearly $50 million per season since the NBA raised the salary cap in 2016. Below is a list of the highest paid basketball players for the 2022-23 season.

Who are the highest paid NBA players in the world?

The point guard of the Golden State Warriors, Stephen Curry, is the highest paid player in all of the NBA for the 2022-23 season. The all-time three-point champion is set to make over $48 million for the upcoming season. This is the first year of a four-year deal that will net the star more than $200 million. He signed the deal before the 2021-22 season. Curry is a four-time NBA champion, two-time MVP, and eight-time All-Star.

The Los Angeles Lakers are one of the most storied teams in NBA history, and they have three of the highest paid players in the sport - headlined by point guard Russell Westbrook. Westbrook is due over $47 million for 2022, but it’s the final year of his contract. Westbrook holds the NBA record for most career triple-doubles, and in 2017 he became the first player since Oscar Robertson in 1962 to average a triple-double for a season.

Another current Laker checks in as the third highest paid player in the sport. LeBron James will make around $44.5 million for the 2022-23 season. James is one of the most accomplished players in NBA history. He is a four-time NBA champion, four-time MVP, and an 18-time All-Star - tied with Kobe Bryant for the most ever in a career. The Akron, Ohio, native was the number-one overall pick in the 2003 draft, and he’s delivered a title for all three of the teams he’s played for (Cleveland Cavaliers, Miami Heat, and Los Angeles Lakers). LeBron is often referred to as one of the greatest basketball players of all time.

Kevin Durant is entering the first year of a four-year deal he signed to remain with the Brooklyn Nets that’ll pay him slightly over $44 million for 2022-23. Durant has been one of the top players in the sport since he entered the league in 2007. K.D. is a two-time NBA champion with the Golden State Warriors and has led the NBA in scoring four times. This was done when he was teammates with Russell Westbrook on the Oklahoma City Thunder.

Bradley Beal isn’t as accomplished as the players listed above, but he’s still an extremely talented and respected player in the NBA. The Washington Wizards guard has spent the entirety of his career with the team and will make over $43 million this season. Beal came into the league in 2012 as the third overall pick. He’s been an All-Star three times and made the All-NBA Third-Team for 2020-21 after averaging over 31 points per game.

Another guard taken in the 2012 draft is Damian Lillard of the Portland Trail Blazers. Since being drafted, Lillard has been the heart and soul of the franchise, and he’s been rewarded handsomely for it. The point guard is set to make over $42 million for the 2022-23 season and will make even more over the following two years of his contract. Lillard is a six-time All-NBA player and was the Rookie of the Year in 2012.

Giannis Antetokounmpo is arguably the best player in the NBA right now. The Milwaukee Bucks forward will make over $42 million this year. He signed his current contract during the 2020-21 season, foregoing his right to be an unrestricted free agent that offseason. Giannis is a do-it-all force, who won his first championship in 2021, is a two-time league MVP, and won the Defensive Player of the Year award in 2020.

Kawhi Leonard came over to the Los Angeles Clippers following a championship season with the Toronto Raptors in 2019. Leonard will earn over $42 million for the 2022-23 season during his second year of a four-year deal with the Clippers. The Claw has been named to five All-NBA teams, seven All-Defensive teams, and is a two-time Finals MVP and DPOY. Leonard missed the entirety of the 2021-22 season with a torn ACL.

The second Clipper to appear on the list of highest paid NBA players is forward Paul George, who will earn over $42 million this upcoming season. George has been one of the best two-way players in the game since he was drafted with the 10th overall pick in 2010. PG-13 is a seven-time All-Star and four-time all-defensive team selection.

The 10th highest paid player in the NBA is Golden State Warriors guard Klay Thompson, who’s set to make over $42 million this season. Thompson is the side-kick to Stephen Curry, making the two arguably the best shooting duo in league history. Klay is a career 20 point per game scorer, five-time All-Star, and four-time NBA Champion.

Who is the highest paid NBA Player?