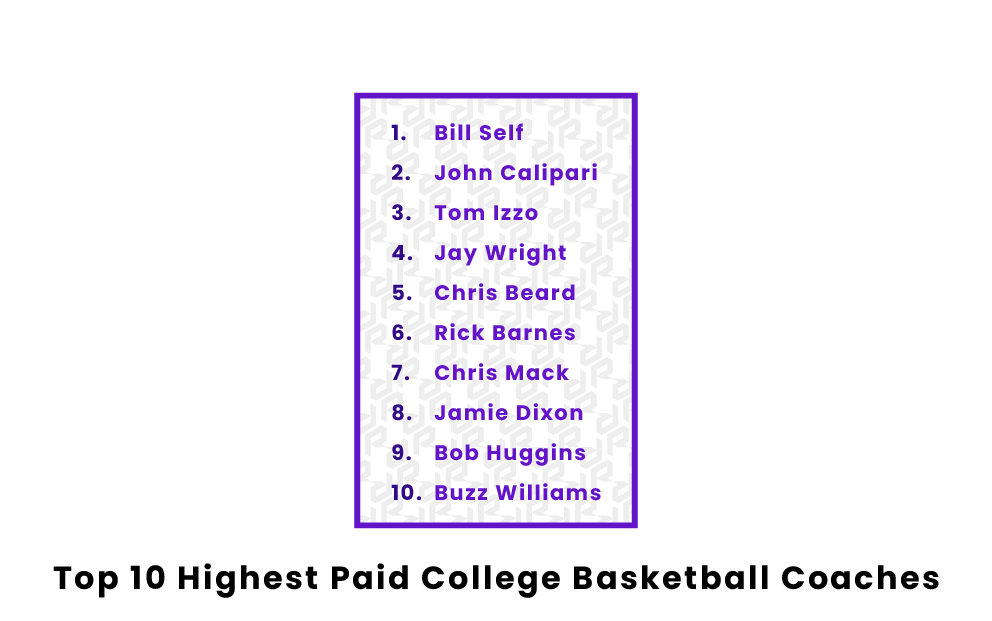 College basketball is, without a doubt, one of America’s prized possessions. Passion drives fans to watch unpredictable games play out amongst some of the best players on the rise. Who makes all this happen, though? We can give some of our biggest credit to the head coaches behind some of these powerhouse basketball programs. Below is a list of the highest paid college basketball coaches.

Who are the Highest Paid College Basketball Coaches?

Bill Self is the head men’s basketball coach at the University of Kansas and is paid over $10 million per year. He’s been coaching at Kansas for the past 19 seasons but has also coached at the University of Illinois, Tulsa, and Oral Roberts. Self has led Kansas to two national championships since beginning in 2003, most recently winning the 2022 National Championship. He began his basketball journey as a player at Oklahoma State, knowing this was the world for him!

John Calipari has been the head coach of the University of Kentucky Men’s Basketball for the last 13 seasons and is paid around $8 million per year. He holds records in the March Madness tournament for several appearances and wins and is known for producing legendary NBA stars like Bam Adebayo and Tyler Herro. Previously, Calipari coached at UMass Amherst and the University of Memphis, where he was also a standout coach.

Tom Izzo is entering his 28th year as the head coach of the Michigan State Spartans’ Men’s Basketball team and is paid around $6.2 million per year. He has spent the last 27 years leading the Spartans to great success, with an impressive cumulative record of 643-254 at the end of the 2021-2022 season. Izzo has been inducted into many halls of fame, making him a legend not only in the state of Michigan, but in college basketball overall.

Just like Tom Izzo ahead of him, Jay Wright made around $6.2 million in his final season. Though Wright retired at the end of the 2021-2022 season, he is still a part of this list because of his recent successes. Jay Wright was the head coach of the Villanova University Wildcats Men’s Basketball team for 21 seasons. He led the team to two national championships in 2016 and 2018, which is two of their three championships overall.

Rick Barnes has been the head coach of the Tennessee Volunteers for the past seven seasons and is paid around $5.7 million per year. He is under his current contract until the 2026-2027 season. Barnes is a very well-known coach, having led the Vols to an SEC Championship in the 2021-2022 season. Some of his most notable former players are Kevin Durant, Tristan Thompson, and Jaden Springer. Barnes has previously coached at George Mason, Texas, Alabama, Ohio State, and Clemson but is by far most successful at UT-Knoxville.

Chris Beard is the newly appointed head coach of the University of Texas at Austin’s Men’s Basketball team and makes around $5.2 million per year. Before joining the Longhorns, Beard spent 20 years as a head coach at many colleges and universities throughout Texas, Kansas, Florida, Arkansas, and more. He is a UT Austin alumni and was passionate about returning to his alma mater to coach.

Jamie Dixon has been the head coach of the TCU Horned Frogs for seven seasons and is paid around $4.3 million per year. However, Dixon has been head coaching for over 20 seasons! Previously, he coached at the University of Pittsburgh from 1999 to 2016, when he was hired by TCU. Dixon helped the Frogs win their first NCAA Tournament game in over 35 years in the 2021-2022 season.

Chris Mack is the former coach at the University of Louisville, having around a $4.2 million salary. He and the university mutually parted ways at the end of the 2021-2022 season, but Mack had previously coached at his alma mater Xavier University. He was only briefly the head coach with the Louisville Cardinals, coaching from 2018-2022, and the decision came to leave when the team began their losing record. However, the university was quite gracious when it came to his salary.

A true West Virginian, Bob Huggins has been a Mountaineer since day one and is paid around $4.1 million to coach the Mountaineers. Born and raised in Morgantown, West Virginia, Huggins went on to attend and graduate from WVU and eventually become an assistant coach for the Mountaineers. After that, he coached at several other colleges and universities before returning to West Virginia as the head coach for the 2007-2008 season. Since then, he’s led the team to the Big 12 Tournament, NCAA Tournament, and more.

Buzz Williams is the head coach for Texas A&M and has been since 2019; he makes around $3.9 million per year. Though a recent addition to the Aggies, he led the team to multiple tournament appearances, including NCAA, SEC, and NIT.

Who is the highest paid college basketball coach in the world?

Though recently retired, Mike Krzyzewski is noted as one of the most famous, most successful, and highest paid basketball coaches ever. In his last season with the Duke University Blue Devils, Krzyzewski (or Coach K) made almost $10 million. He notably won the Blue Devils several NCAA Championships and was known to send many players to the NBA.