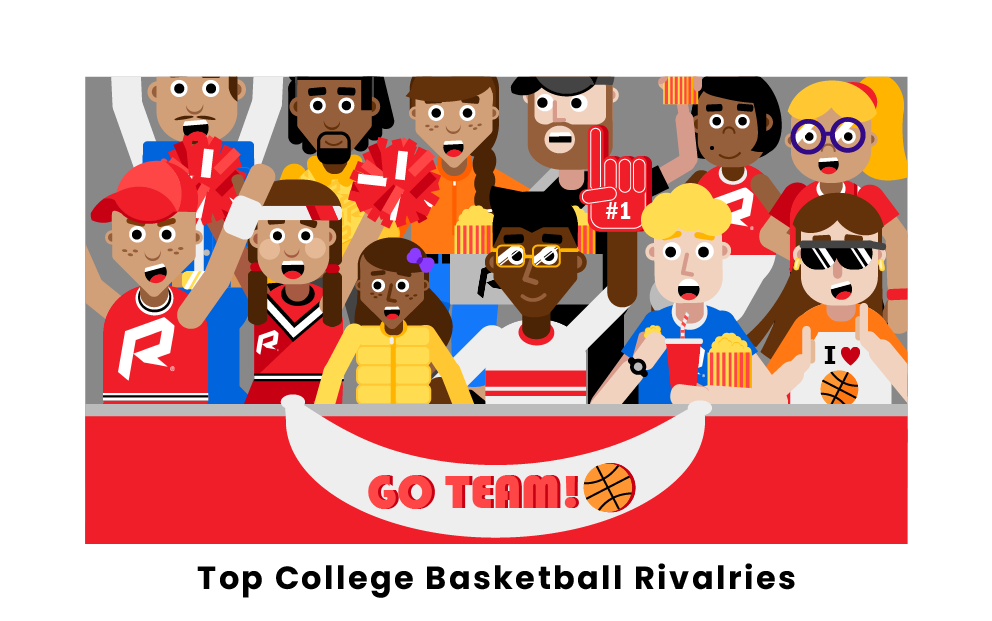 While not a pro league, NCAA basketball offers extremely competitive games and a preview at some of the players that will go on to become all-time greats. College sports fans are known for their energy and passion surrounding their team, and the top rivalries in college basketball are met with tremendous fanfare and irreparable energy within each venue. Some of the rivalries below have spanned over 100 years, while others are still young, however each and every one carries the intensity and importance to be considered a top rivalry in college basketball.

What are the biggest college basketball rivalries of all time?

The Duke Blue Devils and the North Carolina Tar Heels stand at the pinnacle of college basketball rivalries within the NCAA. Both programs are original members of the heralded ACC, meaning they have crossed paths each and every year since 1953. Duke and North Carolina have both been remarkably successful in producing NBA players, with superstars like Zion Williamson, Kyrie Irving, Michael Jordan, and Vince Carter all coming into their own as members of one of these two programs. Further, a good deal of Duke and North Carolina’s bouts against one another have come with legendary basketball coaches Mike Krzyzewski (Duke) and Roy Williams (North Carolina) at the helm. Due to the prolific coaches and players that litter each program’s history, these matchups are often the most intense and competitive the NCAA has to offer.

Syracuse and Georgetown carry one of the oldest rivalries in college basketball, with their first game against one another taking place in 1930. Both teams were once members of the Big East, and their respective time within the Big East Conference overlapped for a total of 33 years (1980-2013). With such an extensive history sharing the same conference, these two programs have played each other plenty of times. Both programs have also been remarkably successful, with four NCAA Championships and eleven Final Four appearances combined. Some might say the rivalry has waned since Syracuse left the Big East for the ACC in 2013, however these two teams still play nearly every year and still spark up the same emotions when visiting one another’s venues.

The Kentucky Wildcats and Louisville Cardinals hold one of the oldest rivalries in NCAA basketball history, with their first meeting taking place in 1913. This intense rivalry emerged due to geographic proximity between the two schools, as they are roughly an hour drive from one another. Both Kentucky and Louisville have been two of the most elite college basketball programs of all time, at #1 and #26 in the all-time wins respectively.

While the rivalry cooled down during the late 20th century due to infrequent meetings, it was rekindled when former Kentucky head coach Rick Pitino accepted the head coaching position at Louisville. During the 16 years Rick Pitino was at Louisville, the Cardinals played Kentucky a total of 18 times and accumulated a record of 6-12.

The UCLA Bruins and Arizona Wildcats rivalry dominates the Pac-12 conference. This rivalry is considered the West Coast’s equivalent to Duke vs UNC, and their games certainly match the intensity. The two teams first faced off in 1923, but the rivalry didn’t officially start until Arizona joined the (at the time) Pac-10 conference in 1978. These two teams have consistently led the Pac-12 in terms of conference championships and conference tournament championships, often facing each other in critical championship games. As the two most historically dominant programs within their conference, their rivalry has only become more compelling.

The Kansas Jayhawks and Kansas State Wildcats represent one of the more heralded in-state rivalries college basketball has to offer. The duo have played one another each year since 1906, representing one of the longest running college basketball rivalries in the NCAA. Their yearly matchups are a part of the Sunflower Showdown, in which the two schools compete in various athletic competitions. This matchup is the sixth most-played in NCAA basketball history.  To add to the importance of this rivalry, both schools are a part of the NCAA’s Big 12 Conference. This means that, in addition to fighting for bragging rights within Kansas, these two programs compete head to head for a chance at winning both NCAA championships and Big 12 Tournament wins.

The North Carolina Tar Heels and North Carolina State Wolfpack share a fierce rivalry due to their close proximity and shared conference. Both teams are in the Atlantic Coast Conference, which features some of the most successful NCAA basketball teams of all time. UNC and NC State are no exception to this characteristic, as they have a combined eight national championships between the two; UNC has won six national championships and NC State has won two. Both teams have produced NBA stars, such as NC State’s David Thompson and UNC’s Michael Jordan. Considering the fact that these schools are a mere 25 miles away from one another, and that they are both ACC powerhouses, it is not surprising that this rivalry is so intense.

The Georgetown Hoyas and Villanova Wildcats are two extremely successful basketball programs that have shared a rivalry since the formation of the Big East Conference. Both schools are a part of what is known as the “Catholic Seven” members of the conference, a collection of seven private catholic schools in the Big East.

Perhaps the most historic meeting between the two teams came in the 1985 NCAA National Championship game, in which the Villanova Wildcats were severe underdogs. College basketball fans across the nation were shocked as Villanova pulled off one of the greatest upsets of NCAA basketball history, defeating Georgetown 66-64. To this day, the Georgetown/Villanova rivalry remains as intense as ever, as they continue to see each other at least once a season playing in the Big East.

UConn and Tennessee have two of the most storied women’s basketball programs of all time; UConn has won 11 National Championships and Tennessee has won 8. The teams have faced off against each other over 20 times since 1995, with UConn currently ahead in the series. Both schools have produced some of the best women’s basketball players of all time. UConn’s list of alumni includes Sue Bird, Maya Moore, Diana Taurasi, and Breanna Stewart. Tennessee’s team has featured Candace Parker, Tamika Catchings, and Kara Lawson. Both teams have also been led by some of the greatest coaches of all time in Geno Auriemma (UConn) and Pat Summitt (Tennessee).

Indiana University and Purdue University are two of the largest universities in Indiana, and their basketball rivalry has thrived for decades. As two Big Ten Conference schools that typically play each other twice a year, there have been many moments that have defined their history. Their first momentous game came in 1979 when they faced off against each other in the NIT Championship. This was their first postseason match-up and Indiana won the game by just one point.

Things really started to get contentious in 1981, when Indiana’s Isiah Thomas punched Purdue’s Roosevelt Barnes in the middle of a game. During their next match-up that season, Purdue fans taunted Hoosier coach Bobby Knight throughout the game. Knight then brought out a male donkey to represent Purdue’s athletic director during a post-game show as a response. Then, in 1985, Knight received a technical foul, threw a chair across the floor, and was ejected from the game.

There have been many crazy moments during their 200+ game series and the rivalry is still going strong. Purdue has been dominant for the past few years, and their dominance is likely to continue.

The rivalry between the University of Cincinnati and Xavier University, is known as the Crosstown Shootout, since their campuses are only 3 miles apart from each other. Though the two teams are not basketball powerhouses, their feud has existed since the first meeting between the teams in 1927, with games played annually since 1946. The two teams reached a boiling point in 2011 when a fight broke out between both teams, resulting in suspensions of 8 players and the relocation of the rivalry game to a neutral location for the following year. This game is known as the Crosstown Punch-Out. In their 85+ meetings, Cincinnati has dominated the series and won more than 60% of their games.

What is the biggest college basketball rivalry?

The biggest college basketball rivalry is without a doubt Duke vs North Caroline. UNC and Duke are two of the biggest names in college basketball and, with both programs residing in the ACC, they go head to head every single year. These two programs have produced tremendous NBA talent, and have each had the privilege of employing one of the best coaches in the history of college basketball (Mike Krzyzewski, Duke and Roy Williams, UNC) for an extended period of time.

What is the oldest college basketball rivalry?

The oldest major Division I college basketball rivalry is the Indiana Hoosiers vs the Purdue Boilermakers. This inter-state rivalry has been going strong since their first game in 1901. Since then, they have played each other at least once every year, and in most years they have played twice. Both teams play in the Big-10 conference and have been members for over 100 years, which adds to the significance of their rivalry. Currently, Purdue leads the all-time series by a large margin.

Which college basketball rivalry has the most viewership?

In terms of NCAA basketball television viewership, the rivalry that attracts the most viewers is between the Duke Blue Devils and North Carolina Tar Heels. While this has been a highly-watched rivalry since NCAA basketball games became televised, recent superstar players have fueled additional fans to watch games. For example, the 2018-2019 Duke squad featured future first overall pick Zion Williamson, who was extremely popular nationwide since he was in high school. The matchup between Duke and UNC in 2019 amassed a whopping 4.34 million television viewers. While some years there is more viewership than others, this rivalry consistently puts up the highest viewership numbers among NCAA college basketball rivalries.

Pages Related to Top 10 College Basketball Rivalries of All Time