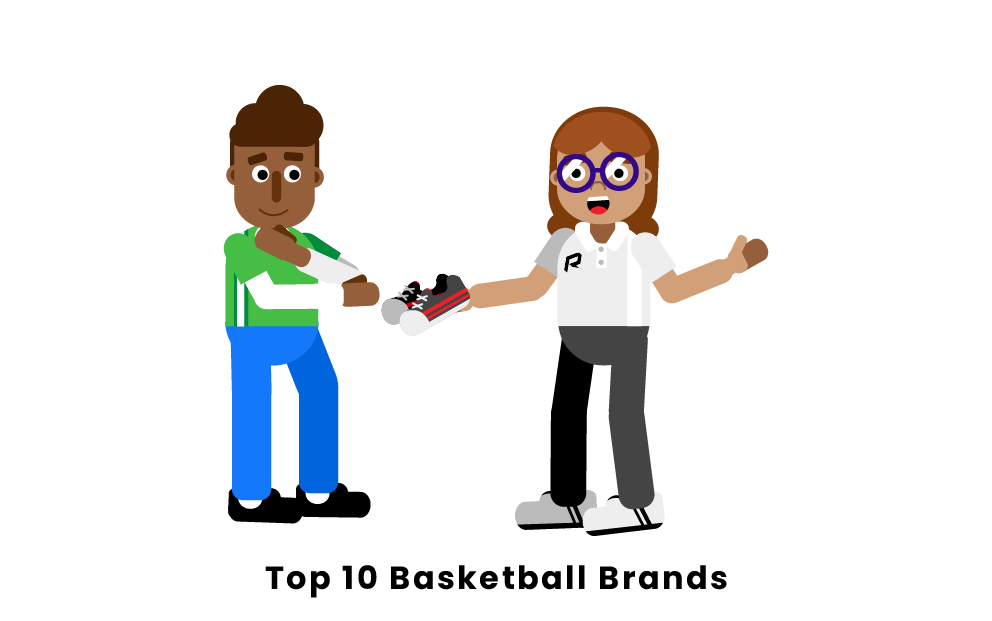 Most athletes and sports fans have specific brands they trust when it comes to apparel and equipment. This list compiles the top ten basketball brands for professional athletes, fans, or recreational players.

What are the most popular basketball brands?

Nike is by far one of the most influential sports brands in the world. Not only did they change the way people look at technology in sportswear, they created a new wave of basketball brand athletes. From innovating the newest and most popular athletic apparel, Nike made its mark on basketball culture by building a modern-day sneaker empire.

The Nike brand was founded in 1964 as Blue Ribbon Sports and created its first basketball shoe in 1972 called the "Nike Bruin". Aside from basketball shoes, Nike has made a long line of sportswear, including jerseys, socks, sweats, headbands, and many other types of apparel. Nike is one of the leading players when it comes to branding basketball athletes. Some of the more notable brand athletes include Lebron James, Kevin Durant, Kyrie Irving, and the late Kobe Bryant. Nike has also impacted college basketball as they sponsor some of the nation's best college basketball teams. Some of the more prominent schools sponsored by Nike include Duke, LSU, University of Oregon, and Syracuse.

Leading the way in creativity, Adidas has become one of the hottest brands in Hip-Hop and Basketball culture. Adidas combines two aspects when it comes to marketing; sports and music. They have endorsed NBA superstars such as James Harden, Damian Lillard and John Wall. They also have creative collaborations with basketball fans and hip hop legends Snoop Dogg, Run-DMC, and Kanye West.

As a globally recognized athletic brand, Adidas specializes in shoes, but also produces other fashion apparel such as tracksuits, hoodies, shorts, socks, headbands, and other accessories and clothing. Adidas has been around since 1949 and was invented as a brand to make a positive impact on athletic performance. Other than the superstar athletes previously listed, Adidas has affiliated themselves with popular global basketball athletes like Jeremy Lin, Kristaps Porzinigis, Andrew Wiggins, and Ricky Rubio. Adidas plays a significant role in college basketball as it sponsors a plethora of great schools and universities. Some of the more notable teams sponsored by Adidas include Kansas, Louisville, and Arizona State University.

Jordans are the ultimate collectors brand for sneakerheads and basketball fans alike. Jordan has established itself in the basketball community as a brand representing tradition, style, and power. Jordan's are easily one of the most recognizable pairs of shoes in the basketball community. From both a fashion and function perspective, they are sure to make a statement not only on the court but wherever they are seen.

Jordan was a brand that was built out of a negotiation with Nike back in 1984 to give rookie Michael Jordan his own line of shoes, respectively called "Air Jordans." Today the Jordan brand is one of the largest basketball brands to date. Other than their popular shoes, Jordan also makes hoodies, windbreakers, shirts, shorts, and other items. As one of the more powerful brands in the athletic marketing industry, Jordan made sure to surround its brand with headlining basketball all-stars like Carmelo Anthony, Chris Paul, and the future of the NBA Luka Doncic. Some of the college basketball teams that Jordan sponsors include the University of North Carolina, Michigan, and Georgetown University.

Under Armour is considered to be one of the more up-and-coming brands in the basketball community. They made their claim to fame when they signed two-time MVP Steph Curry to a shoe deal back in 2013. This event entered Under Armour into the basketball shoe conversation and completely changed the landscape of what the brand means to basketball.

The Under Armour brand was built in 1996 to create a synthetic material that could be used to help make shirts more comfortable when a player is sweating. Today the brand has laid a strong foundation to be the next big basketball shoe company. They've made major headway in signing some of basketball's finest athletes, such as Joel Embiid, Mo Bamba, and Steph's brother Seth Curry. They also specialize in athletic gear, but have begun to create their own version of unique basketball shoes and accessories. Some popular college basketball teams that are sponsored by Under Armour include Boston College, Maryland, and UCLA.

Puma recently started creating a buzz in the basketball community since they re-entered the basketball market. Their first move was to find creative direction. Where else would a brand look for inspiration and leadership to lead the way for a generation of new hoopers? How about the signing of Hip-Hop mogul and rap culture influencer Jay-Z? Puma is redefining basketball culture at a swift pace by signing young, big name athletes and using the guidance of one of the biggest names in Hip-Hop history.

The Puma brand was birthed in 1948 by the Dassler brothers. After agreeing to part ways, Adolph Dassler created the brand known as Adidas and Rudolph Dassler created Puma. The athletic brand is notorious for creating running shoes. However, entering this modern era of athletic shoes, they also create skate shoes, cleats, and basketball shoes. They also have multiple lines of fashion apparel and accessories. As mentioned before, they are looking to create their brand based off of the newest and freshest NBA Athletes. Some of the players include Deandre Ayton, RJ Barrett, Marvin Bagley, and Kyle Kuzma. Puma does not currently sponsor any college basketball teams. However, they did strike a multi-year sponsorship deal with "The Basketball Tournament", a tournament that involves former college basketball players.

Reebok was a big player in the basketball shoe community in the 90's. However, in today's modern NBA, it is rare to see a player put on a pair of Reeboks. It should be noted that outside of basketball, their specialized basketball shoes are popular among hip-hop artists and other brand appreciators. Given their current status in the basketball community, it isn't seen as the most popular brand, but will always be recognized in basketball history.

The Reebok brand was founded in 1958 by Joe and Jeff Foster in England. They are known for their popular basketball shoes but also sell other athletic attire and workout gear. As mentioned before, Reebok's popularity in basketball began in the 90's, most notably with athletes such as Dominique Wilkins and their biggest client Allen Iverson. There are currently no college basketball teams that are sponsored by Reebok.

Converse should be considered the grandfather of athletic shoes in professional basketball. Made popular in the 1960s and early 1970's, the popular "Chuck Taylor" sneaker was one of the most popular shoes not only on the basketball court but in society. The brand managed to sign early Hall of Fame athletes like Larry Bird and Magic Johnson to shoe deals in the 1980s. It was the shoe brand that the majority of the NBA wore until competition from other shoe companies began to rise. Today, Converse is aiming to make a comeback in the basketball world and hopes to rise to popularity once again.

The Converse brand was founded in 1908 by Marquis Mills Converse in Malden, Massachusetts. They would release their first version of the popular "Chuck Taylor" shoe in 1917. Known most notably for their shoes, Converse also sells casual fashion apparel. They have recently begun to revitalize their brand under a new creative direction by partnering with rapper Tyler, the Creator, and signing their first big name basketball athlete in years, Kelly Oubre. As of now, there are no college basketball teams that are sponsored by Converse.

Many casual basketball fans may be unfamiliar with this brand. Those who are sneakerheads and would consider themselves to be NBA fanatics will know that Li-Ning is one of China's biggest basketball shoe brands. Their products aren't the most worn in America, however, they have managed to sign big name players to sneaker deals.

The company was founded in 1990 in China by Li Ning, a champion gymnast who aimed to create a national Chinese brand for athletes to wear at the Olympics. The company specializes in athletic apparel, primarily footwear. Their biggest claim to fame is when they signed future Hall of Famer Dwayne Wade in 2012. They also have sponsorships with prominent basketball stars C.J. McCullom and D'angelo Russell. It has sponsorships with both the Chinese University Basketball Association and the Chinese University Basketball Super League.

Anta is another famous Chinese athletic brand that many basketball fans may not be familiar with. Although the brand is based out of China, they have signed a decent following of athletes in the United States and Asia, one of the bigger athletes being boxer Manny Pacquiao. Their shoes are a combination of simplicity, style, and function which is why many athletes trust their products.

Anta was created in the 1990s by Ding Shizhong with the purpose of creating a new functional sportswear brand that is aimed at high valued athletes but made available to everyone. Anta is known for their athletic and highly functional shoes used in running and basketball. Anta made its mark on the basketball industry when they signed three time NBA champion Klay Thompson. Some of the other notable basketball athletes that have signed with Anta are Gordon Hayward, Rajon Rondo, and former MVP Kevin Garnett. They do not currently sponsor any college or university basketball teams.

Peak is a Chinese athletic brand that has created a following through athletic marketing overseas and their list of NBA talent signed to the brand. They mainly specialize in athletic shoes but have also made apparel for national teams in other sports, and casual workout gear for everyday people.

Founded in 1989, Peak was established as a shoe manufacturer but over time expanded into the global athletic clothing conglomerate that they are today. Their most famous interaction with the basketball industry came when they signed eventual 4x NBA champion Tony Parker. They've built a long list of NBA talent through sponsorships that include Dwight Howard, Matthew Dellavedova, and 3 time Sixth Man of the Year winner Lou Williams. They do not sponsor any college or university teams, but do sponsor a list of national basketball teams and overseas professional teams.