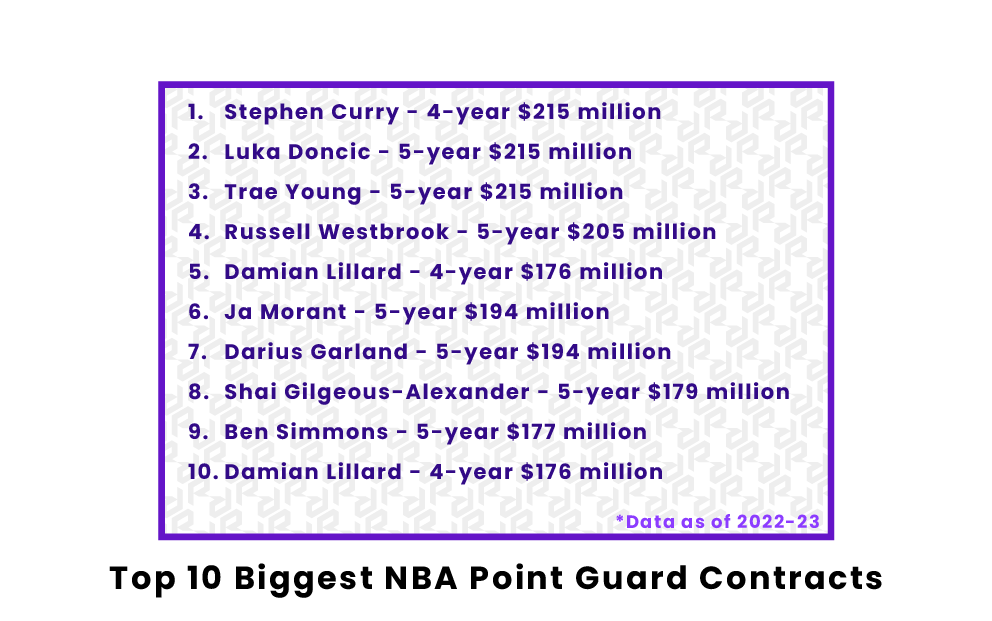 In a league where competition has never been higher, sharp-shooting point guards like Steph Curry, Luka Doncic, and Damian Lillard are worth their weight in gold. The league has seen a significant increase in the value of point guard contracts in recent years. Let’s now take a look at the top ten biggest NBA point guard contracts!

What are the biggest NBA Point Guard Contracts of All Time?

Since Steve Kerr’s arrival to the Bay Area in 2014, Steph Curry has inserted his name in the greatest of all time conversation, winning two NBA MVPs and four championships. His heroics have earned him a four-year $215 million extension to keep him on the Warriors through the 2026 season.

In just four seasons in the NBA, Slovenian superstar Luka Doncic has become a top ten NBA player. As he became eligible for a supermax extension, the Dallas Mavericks handed Luka Doncic a five-year $215 million extension in the 2021 offseason.

The former EuroLeague MVP Luka Doncic is a three-time All-Star and a three-time All-NBA First Team selection. Doncic was also the recipient of the NBA Rookie of the Year award for the 2019 season.

Acquired by Atlanta in a Draft night trade with the Dallas Mavericks, Trae Young has established himself as the face of the Hawks in four seasons in Georgia. In the summer of 2021, Young agreed to a five-year $215 million supermax extension with the Hawks, the same deal signed by Doncic in the same offseason.

The former Oklahoma Sooner is a two-time All-Star and has made it once to the All-NBA Third Team.

In September of 2017, Russell Westbrook signed a five-year $205 million extension to stay on the Thunder through the 2023 season, making him one of the highest paid players in the league at the time.

Five years after his deal, Russell Westbrook is playing his second season with the Los Angeles Lakers after a season in Houston and one in Washington, D.C. Westbrook is a nine-time All-Star and the recipient of the NBA MVP for the 2017 season.

Since his arrival to the league in 2019, Ja Morant has shown highlights of athleticism and speed that, combined with his shooting, make him one of the best young players in the league. This led the Grizzlies to offer him a five-year $194 million max extension in July 2022.

Ja Morant has made it to the All-Star Game once and has won the NBA Rookie of the Year award in 2020 and the Most Improved Player award in 2022.

Drafted fifth overall in 2019, Darius Garland has become one of the cornerstones of the Cleveland Cavaliers, who decided to hand him a five-year $194 million max extension in the 2022 free agency.

The Vanderbilt product made it to the All-Star Game for the first time in his career in 2022 and played a crucial role in bringing the Cleveland Cavaliers back to postseason basketball after a four-year drought.

After less than a season in Los Angeles, the Oklahoma City Thunder acquired the rights for Shai Gilgeous-Alexander in a trade with the Los Angeles Clippers. After two great seasons in Oklahoma, the Thunder handed Gilgeous-Alexander a five-year $179 million max extension in the 2021 offseason.

Since he joined the Thunder, Shai Gilgeous-Alexander made the NBA All-Rookie Second Team in 2019 and has become one of the main pillars in a rebuilding franchise, thanks to his explosiveness and game vision.

In February 2022, the Brooklyn Nets sent James Harden to the Philadelphia 76ers in a deal that brought Ben Simmons to the Big Apple. The trade came two seasons after the Australian point guard signed a five-year $177 million max contract extension to stay in Philadelphia.

The 2018 NBA Rookie of the Year is a three-time All-Star and a two-time NBA All-Defensive First Team, as he is constantly among the players with the highest number of steals every season.

The fifth pick at the 2017 NBA Draft, De’Aaron Fox, closes out the top ten of the biggest NBA point guard contracts with the five-year $163 million max extension that he agreed to with the Sacramento Kings in the 2020 offseason.

In five seasons in California, the former University of Kentucky player has become the star player of the Kings franchise, averaging over twenty points per game for three consecutive seasons.

Who has the biggest NBA Point Guard contract currently?

Golden State Warriors superstar Stephen Curry’s four-year $215 extension is currently the biggest NBA point guard contract. Luka Doncic from the Dallas Mavericks and Trae Young from the Atlanta Hawks have the next largest contracts. Steph Curry also leads the rankings for annual average value of the contract, ahead of Damian Lillard from the Portland Trail Blazers and Luka Doncic and Trae Young, whose extension pays the same yearly salary.

Who has the biggest NBA Point Guard contract of all time?

Stephen Curry’s four-year $215 million extension is the biggest NBA point guard contract of all time. Luka Doncic and Trae Young close out the top three. Seven out of the top ten biggest NBA point guard contracts of all time were either supermax or max extensions handed to players drafted after 2017. This shows how young point guards have established themselves among the most valued players in the league and the cornerstones of the franchises that drafted them.