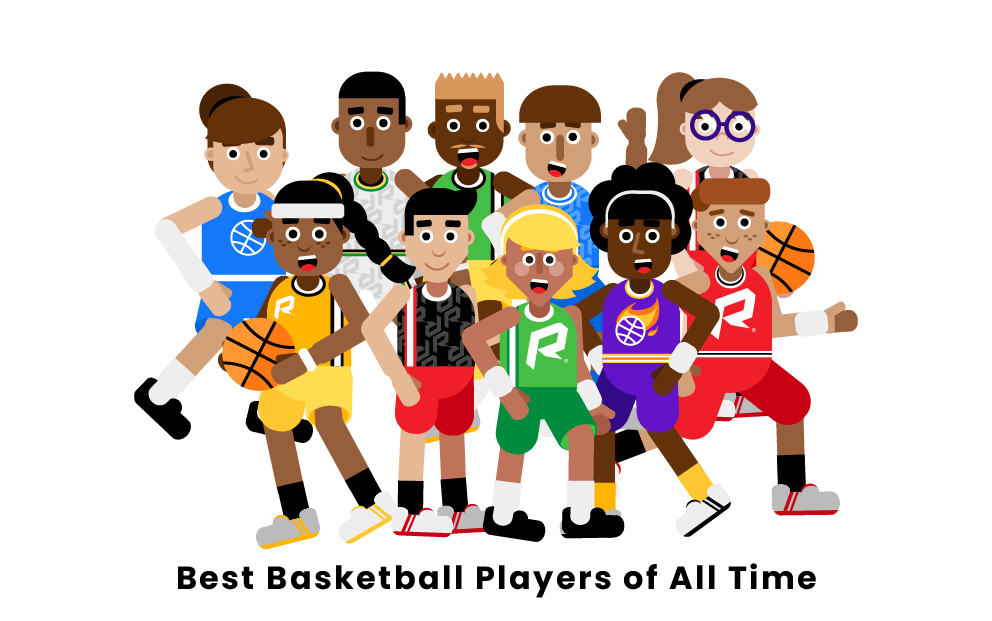 Basketball is a sport where players can profoundly affect their team, with only five players on the court for each team and only 15 players on an NBA team. This has allowed certain players’ individual abilities to stand out and make them some of the best athletes that basketball has ever seen. So who are the top 10 best basketball players of all time?

Who are the best basketball players of all time?

Michel Jordan is widely considered to be the greatest basketball player of all time. He played 13 seasons with the Chicago Bulls and two seasons with the Washington Wizards. He won six NBA Championships with the Chicago Bulls during the 1990s. Those championships were split into two three-peats. He is known for being one of the best playoff performers in NBA history, as he scored his career-high 63 points against the Boston Celtics in the 1986 playoffs and had many other iconic playoff performances, including what’s known as the “flu game,” where he scored 38 points against the Utah Jazz in the 1997 NBA Finals while suffering flu-like symptoms. Another one of his iconic moments came against the Utah Jazz in the 1998 NBA Finals, when he stole the ball from Karl Malone and scored the game-winning basket to defeat the Jazz 87-86.

Jordan retired three times during his career, once after the 1992-1993 season before coming back to play at the end of the 1994-1995 season, and then again after the 1997-1998 season before joining the Washington Wizards in 2001 for two seasons before retiring permanently.

While Michael Jordan may be considered the greatest basketball player ever by some, many believe that title belongs to LeBron James. LeBron James is an active player who has played 18 seasons of NBA basketball for three different teams, the Cleveland Cavaliers twice, the Miami Heat, and the Los Angeles Lakers. He won an NBA Championship with each of these teams, two with the Heat, one with the Cavaliers, and one with the Lakers. LeBron James played in eight straight NBA Finals from 2010 to 2018. During those appearances, he won three NBA titles.

Similar to Michael Jordan, LeBron James is known for iconic playoff performances, including his 2012 Eastern Conference Finals Game 6 performance with the Miami Heat, where he scored 45 points and totaled 15 rebounds to defeat the Celtics. Perhaps his most famous playoff moment came in the 2016 NBA Finals against the Golden State Warriors, who held a 3-1 lead in a best-of-seven series. Behind James’ stellar performance, the Cavaliers came back to win the series 4-3, becoming the first NBA team ever to come back from such a deficit in the Finals. LeBron won the Finals Most Valuable Player for his performance, which was capped off by an iconic block in Game 7 to prevent the Warriors from scoring late in the fourth quarter.

Kareem Abdul-Jabbar is considered one of the greatest players at the center position of all time. He holds the record for the most points scored in a career in NBA history and won six NBA Championships during his time in the NBA. He played for two different teams, the Milwaukee Bucks and the Los Angeles Lakers. He won one NBA Championship with the Bucks and the other five with the Lakers.

Kareem is known for his iconic shot, the skyhook, in which he holds the ball with one hand away from the basket and hooks it over his head to score. During his stint in college, he is credited with the NCAA’s ban on dunking from 1967-1977 in an effort to stop his basketball dominance. His team, the UCLA Bruins, had a record of 88 wins and 2 losses. As a result of the ban on dunking, Kareem developed his iconic shot, which allowed him to become one of the greatest players of all time.

Wilt Chamberlain played in the NBA for fourteen years and is considered one of the greatest centers as well as players in the history of basketball. He played for the Philadelphia and San Francisco Warriors, the Philadelphia 76ers, and the Los Angeles Lakers. He won one of his championships with the 76ers and the other with the Los Angeles Lakers.

Chamberlain holds the record for most points and rebounds in a single game, with 100 points and 55 rebounds. During the 1961-1962 season, he averaged 50.4 points per game and averaged 48.5 minutes per game. Basketball games are 48 minutes long, excluding overtime. He still holds the total career rebounding record in the NBA. During the 1967-1968 season, he also led the NBA in assists.

Many rules were implemented because of Chamberlain, including widening the lane, creating the offensive goaltending rule, and changing the rules involving free throws and inbounding. Chamberlain’s dominance changed the game in unprecedented ways.

Magic Johnson is widely considered to be the greatest point guard of all time; he was one of the key figures in the 1980s Celtics versus Lakers rivalry. He played for the Los Angeles Lakers his entire career. He won five NBA Championships with the Lakers during the 1980s. He was a unique player because he played point guard despite being 6’9”. He is also considered one of the greatest passers of all time, averaging 11.2 assists over his career.

One of his most iconic moments came in his rookie season in the NBA Finals. His teammate, Kareem Abdul-Jabbar, was injured in Game 6 of the NBA Finals and Magic stepped in to play center in his place. He scored 42 points, winning the game and the series for the Lakers, and because of his performance, he won the NBA Finals Most Valuable Player award.

Larry Bird played 13 seasons with the Boston Celtics and won three NBA Championships, winning Finals MVP in two of those championships. He’s known for being one of the first players to utilize the three-point shot, which was implemented in the NBA in 1979. He was the best player on the Celtics during the iconic 1980s Celtics versus Lakers rivalry that saw them face off in the Finals three separate times throughout the decade.

Bird was known for his shooting and rebounding ability, as he averaged 10 rebounds per game over his career as a small forward. One of his most iconic performances came against the Atlanta Hawks, where he scored 60 points. Another one of his iconic performances came in Game 5 of the Eastern Conference Finals against the Detroit Pistons, where Bird scored 36 points, had 12 rebounds, and 9 assists. The performance was capped off by a steal and assist to win the game.

Bill Russell is one of the most iconic players in NBA history. He’s known for winning the most NBA Championships ever, with 11 NBA Championships in 13 seasons of playing in the NBA. Russell and Wilt Chamberlain battled as the two best centers during the 1960s, and the pair faced off twice in the NBA Finals, with Russell’s Celtics winning both championships. He was also known for his rebounding, as he led the NBA in rebounding four times in his career. Bill Russell holds the second-highest rebounding game in NBA history, recording 51 rebounds against the Syracuse Nationals, and the only higher total was by Wilt Chamberlain, who holds the NBA record with 55 rebounds. He was also known for his shot blocking ability, but the stat wasn’t officially tracked until 1973, after his retirement.

Following the 1966 season, Bill Russell was promoted to head coach of the Celtics while still playing for the team. During his stint as player-coach, he won an additional two championships. He was also the first African-American head coach in the NBA.

Bryant had several iconic moments throughout his long career, including two shots against the Phoenix Suns in the 2006 playoffs, one to tie the game and send it to overtime, and the other to win the game in overtime. He scored a career-high 81 points against the Toronto Raptors, which is the second-highest point total ever in an NBA game, only behind Chamberlain’s 100-point game. He’s also famous for scoring 60 points in the last NBA game of his career against the Utah Jazz. Kobe Bryant tragically passed away in January of 2020 after a fatal helicopter crash in Calabasas, California.

Shaquille O’Neal is considered one of the most physically dominant players in the history of the NBA. He was known for his size and strength, as he was 7’1” and weighed 325 pounds. He played for many teams throughout his career, including the Orlando Magic, the Los Angeles Lakers, the Miami Heat, the Phoenix Suns, the Cleveland Cavaliers, and the Boston Celtics. He went to the NBA Finals with three different teams, the Orlando Magic, Los Angeles Lakers, and the Miami Heat. He won four NBA Championships, three with the Lakers and one with the Heat.

Stephen Curry is an active player and is widely considered the greatest shooter to ever play in the NBA. He is credited with changing how basketball is played, providing a much larger focus on three-point shooting. He holds the NBA record for most three-pointers made in a career, and he also holds the record for most three-pointers made in a season. In 2016, he became the only unanimous winner of the NBA’s Most Valuable Player Award.

Curry has played for the Golden State Warriors throughout his career, during which time the team has made seven NBA Finals, including five NBA Finals in a row, winning four Championships. During the 2015-2016 season, he led the Warriors to an NBA regular-season record for the most wins in a season, finishing with a record of 73 wins and 9 losses, breaking the record previously held by Michael Jordan’s Chicago Bulls. Curry won his fourth and most recent NBA Championship in 2022, defeating the Boston Celtics and taking home Finals MVP as well.

Who is the best basketball player of all time?

Michael Jordan is widely considered the best basketball player of all time; during his career in the NBA, he won six NBA Championships and became known as one of the most dominant players the league has ever seen. He also won five NBA Most Valuable Player awards, the second-most in NBA history, only behind Kareem Abdul-Jabbar.

Who has won the most NBA championships?

Pages Related to Top 10 Best Basketball Players of All Time