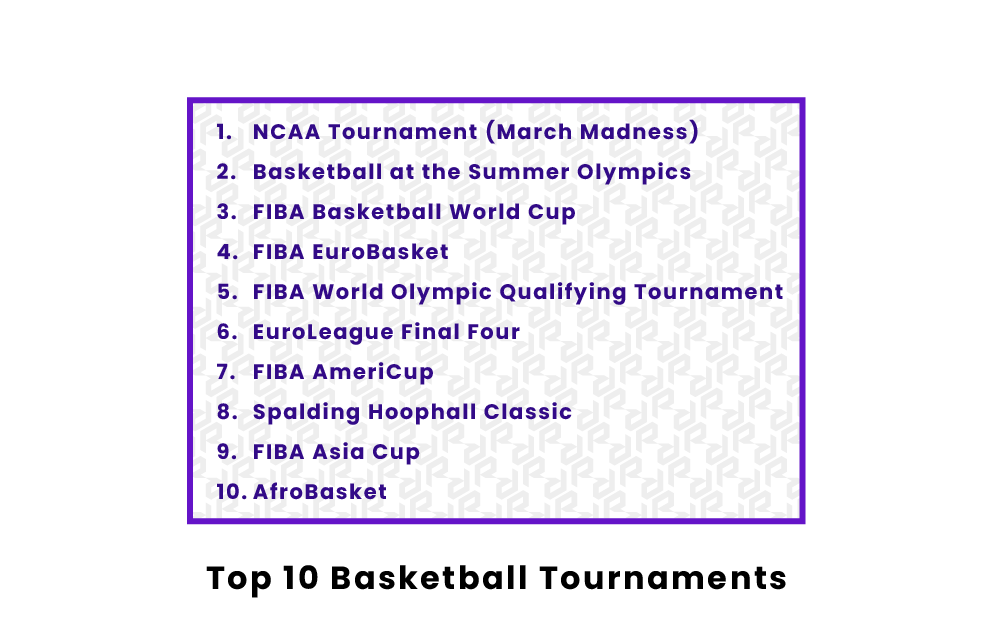 While the NBA is the most popular basketball league in the world, many other tournaments around the world attract millions of viewers and fans in attendance every year. These include both collegiate tournaments and international basketball competitions. Let’s take a look at the ten best basketball tournaments!

What are the Biggest Basketball Tournaments in the World?

Every year, millions of fans from around the world tune in to watch the NCAA Division I Basketball Tournament. March Madness is a tournament with no equals in the world, where the best sixty-four teams in college basketball face each other in a single-elimination tournament throughout the month of March.

Whether it is the Men’s or Women’s March Madness tournament, the atmosphere in the stands is unmatched as thousands of fans travel around the country to see their school’s journey to the title.

2. Basketball at the Summer Olympics

Held every four years, the basketball tournament at the Summer Olympics always offers great displays of basketball, especially from Team USA, which has historically dominated the competition for both men’s and women’s.

Similarly to the basketball at the Summer Olympics, the FIBA Basketball World Cup only includes the best national teams in the world. However, thirty-two teams compete in the tournament, five from FIBA Africa, seven each from FIBA Americas and FIBA Asia/Oceania, twelve from FIBA Europe, and the host nation.

Team USA is the most decorated team in both the men’s and women’s tournaments, with twelve and fourteen medals, respectively, and a combined sixteen gold medals.

Usually held every two years, FIBA decided in 2012 that EuroBasket would be held every four years, just like the World Cup. EuroBasket is one of the international tournaments organized by FIBA in each continent, and it is considered the most competitive as the majority of the highest-ranked teams in the world are from Europe.

Spain is the most successful national team in the modern era of the EuroCup, with fourteen total medals, while Italy and France have ten each.

Outside of the NBA, the highest level of professional club basketball is displayed in the EuroLeague. The competition is a semi-closed league with sixteen permanent members out of the eighteen total teams. The EuroLeague is divided into two major phases: a regular season round with a knockout phase and the Final Four, representing the tournament phase of the competition.

The EuroLeague Final Four is structured like March Madness, as the four teams play two single-elimination games to be crowned champions.

The FIBA World Cup Olympic Qualifying Tournament is the only tournament in this list where the winning team does not receive a trophy. Instead, the winner of this tournament earns a spot in the Olympic basketball tournament, the biggest national team competition in the sport.

Twenty-four eligible teams are divided into four tournaments of six teams each. In each tournament, national teams take part in a round-robin group stage competition that is followed by a semifinals and then finals between the two remaining teams. The winner of each tournament gets awarded a spot in the Olympics.

Held every four years like the FIBA World Cup, FIBA AmeriCup is the biggest international basketball tournament in the Western hemisphere. The tournament was established in 1980, and twelve teams currently take part in it.

While eighteen teams have made it to the final stage of the tournament over the last forty years, the United States, Argentina, Brazil, and Puerto Rico have dominated almost every edition of the competition.

The Spalding Hoophall Classic is an annual contest featuring the best high school basketball teams in the country. The tournament is held over a four-day span during Martin Luther King Day Weekend, and every game is played at Springfield College’s Blake Arena.

Over the years, many future NBA and WNBA legends like Kevin Durant, Carmelo Anthony, Elena Delle Donne, and Breanna Stewart have all put up legendary performances at the Spalding Hoophall classic, paving their way for great professional careers.

Similarly to the FIBA EuroBasket, the FIBA Asia Cup is played every four years, starting from the latest 2022 edition. Sixteen teams qualify for the tournament and are divided into four groups. The top two or three teams from each group qualify for the single-elimination knockout phase.

China has historically dominated the men’s FIBA Asia Cup with sixteen medals, while South Korea has twenty-two total medals on the women’s side.

As the basketball movement is gaining popularity in Africa, AfroBasket, the top FIBA international competition in the continent, is attracting a great following from around the world. The tournament is held every four years to follow the same rules as other FIBA competitions.

Angola, Egypt, and Senegal have all seventeen medals on the men’s side, while Senegal is leading with twenty-two medals in the women’s tournament.

What is the biggest Basketball tournament in the world?

The NCAA tournament, also known as March Madness, is the biggest and most unique basketball tournament in the world. Every year, sixty-four teams on the men’s side and sixty-four teams on the women’s side compete in a single-elimination tournament over the month of March to become national champions. The atmosphere created by each school’s student section is unmatched and the format increases the level of competition, creating the possibility for improbable upsets and Cinderella stories.