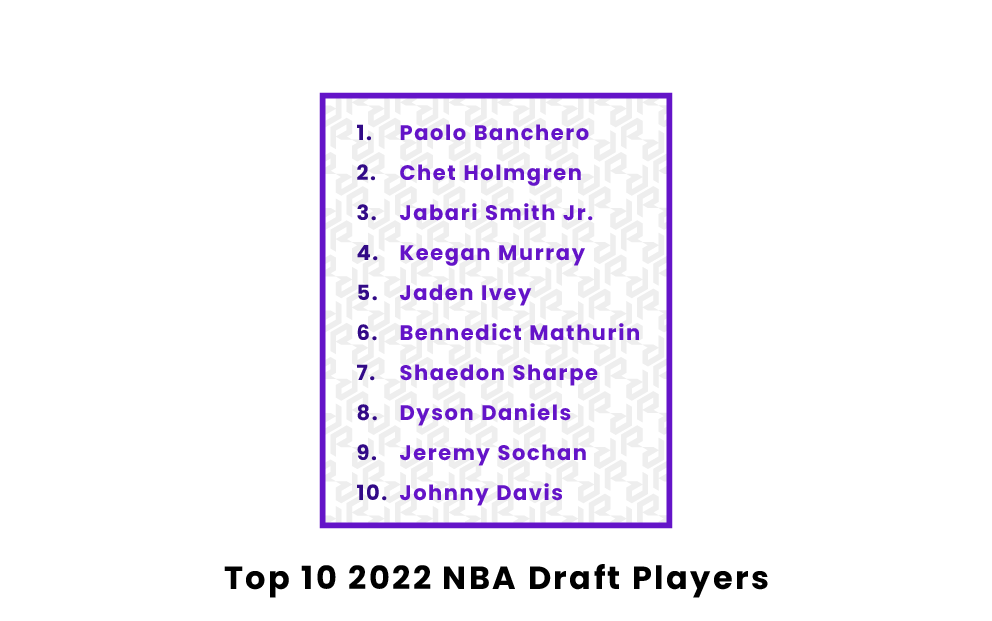 The NBA Draft is always an opportunity for the league’s worst teams to find their next franchise centerpiece. Oftentimes, a number of players from a given draft will contribute right away, and some will even develop into stars. While higher-ranked players tend to have a better chance of success, there are always steals to be had later on with unheralded prospects. To learn more about the top ten picks in the 2022 NBA Draft, keep reading below.

With the first-overall pick in the 2022 NBA Draft, the Orlando Magic selected Paolo Banchero of Duke University. The Brazilian forward is part of the big three of this draft that stand out from the rest, and he has plenty of reasons for any team to be excited about selecting him. He measured 6’10.5” at Duke’s pro day without shoes on, but he’s no traditional big man. Banchero flashed elite isolation scoring potential during his one season at Duke, showing the ability to get off his shot from the perimeter, the midrange, and inside the paint. He is a tremendous athlete whose intense strength and big frame allows him to fight through contact and finish strong, and he backs that up with solid free throw shooting (73% last year). One concern for Banchero is his three point shot, which was shown to be inconsistent at times last year. With the NBA three point line being further out than in college, it is an area of his game he will have to work at to fit the ideal mold of the modern NBA player.

Chet Holmgren was selected second overall in the 2022 NBA Draft by the Oklahoma City Thunder. His game has scouts everywhere drooling, and for good reason. He has the height and shot-blocking ability of a traditional center, but he combines that with guard-like ball handling and outstanding three-point shooting. Holmgren posted an insanely-efficient freshman year at Gonzaga, shooting nearly 61% from the field. The biggest knock on him is his weight. At just under 200 pounds despite being seven feet tall, the consensus is that Holmgren will have to add some bulk to his frame if he wants to compete with the league’s elite centers. Still, he possesses elite defensive instincts, and many believe he will be an All-Defensive Team player in the NBA. His playmaking ability on offense is also superb, given that he can create his own shot off the dribble as well as create shots for teammates with his excellent passing skills.

In the 2022 NBA Draft, Jabari Smith Jr. was drafted third overall by the Houston Rockets. A beast in his time at Auburn, Smith Jr. is perfect for the modern NBA. He is a tall forward with an elite jumpshot that extends to three-point range, and he is an absolute monster on defense. However, some scouts believe Smith Jr. relies on his jump shot too much, and his field goal percentage is lower than one would expect from a 6’10” forward. He makes a living off of hitting contested jumpers, where his tall frame allows him to shoot over taller defenders. He is not known as much of a playmaker, but still his potential is thought to be of a superstar player in the league.

Keegan Murray was drafted with the fourth pick in the 2022 NBA Draft by the Sacramento Kings. Another in the long list of power forwards in this draft, Murray’s dominant numbers help him stand out from the rest. He averaged nearly 24 points per game last season and did so on remarkable shooting splits, knocking down nearly 40 percent of his three pointers and shooting 55 percent overall. Murray was a late bloomer in the game, not gaining much national attention until the end of his time in high school. However, he has developed into one of the most well-rounded players in the draft. He can truly do it all from the power forward position, and his versatility will be especially appreciated in today’s modern game. Many critiques of his game are small and nitpicky at best, as he does not have any glaring flaws. As a 6’9” forward who can handle and shoot the ball, it’s no surprise that his name was called early in this draft.

The Detroit Pistons selected Jaden Ivey with the fifth pick in the 2022 NBA Draft. In a forward-heavy draft, Jaden Ivey stands out as a truly elite point guard. He has drawn comparisons to Ja Morant and Donovan Mitchell for his combination of elite athleticism and strength on offense. He has a lightning-quick first step that allows him to blow by defenders and is effective at finishing in the paint. He was not the most efficient star in college basketball last year, but he displayed a knack for hitting big shots in key moments that NBA scouts love. One area that Ivey could improve in would be his defense. While he possesses the size and quickness to be an above-average defender, he seemed uncommitted at times last year on that end of the court. Ivey’s speed in the open court is truly something to marvel at, but when he did not have the ball in his hands on offense he seemed to slow down and watch his teammates play. Still, his explosiveness made him a top prospect in this year’s draft.

Bennedict Mathurin was drafted sixth overall by the Indiana Pacers in the 2022 NBA Draft. He is one of the most polarizing prospects on this list. At his best, he looks like a future NBA All-Star and surefire top-five pick, but at other times he looks lacking in several different areas. The biggest knock on Mathurin comes on defense, where he has all the tangibles needed to be great but rarely puts them all together. Scouts worry that he seems disengaged at that end of the floor and doesn’t put his focus into being an elite stopper, which he has the potential to be. On offense, he can sometimes fall back into taking a number of contested jumpers, a trait that never looks good for any prospect. Still, he has elite shotmaking ability among others in this class and is tremendously explosive, throwing down a number of poster slams in his last college season. Also growing as a ball handler and a passer, there’s no question Mathurin has a very high ceiling.

With the seventh pick in the 2022 NBA Draft, the Portland Trail Blazers selected Shaedon Sharpe. Sharpe was one of the hardest prospects to grade in this draft. Going into his senior year of high school, he was ranked as the number one prospect in his class, but things have changed a lot since then. Sharpe decided to skip his senior year of basketball, instead opting to enroll early at Kentucky in January. As a reclassified freshman, Sharpe did not appear in a single game, making it two years since he last played in high school. Still, his skills are undeniable. He is an elite shot creator who can sink shots from all over the court, and his explosive athleticism allows him to get wherever he wants on the floor. However, due to not playing much organized basketball, Sharpe still needs to learn how to play in a system and pick up on plays and sets. In addition, while he has a smooth shooting stroke it can be streaky at times, and some teams question his motor and work ethic.

Dyson Daniels was selected eighth in the 2022 NBA Draft by the New Orleans Pelicans. Unlike the other nine names on this list, Australian Dyson Daniels took a different route to this year’s draft. He skipped college and went straight to the G League, where he played for the G League Ignite, a team full of draft prospects who have chosen to forego college. That’s not the only thing that differentiates Daniels from other prospects, though. At 6’6”, he is extremely tall for a point guard, and that height allows him to pull down a ton of rebounds. Still, he has all the skills a guard needs, with a tight handle on the ball that makes him a great playmaker and a sweet shooting stroke. Many teams project that he will not stay at point guard in the NBA, as he is projected to keep growing and fill out his frame as he ages. The thought of using him at multiple positions, combined with his already-clear skillset, has many scouts believing Daniels’ potential is extremely high.

With the ninth pick in the 2022 NBA Draft, the San Antonio Spurs selected Jeremy Sochan. He is a versatile 6’9” forward who can produce both offensively and defensively. Sochan has experienced a wide variety of basketball settings, playing at La Lumiere School in Indiana, OrangeAcademy in Germany, and for Poland in international competition before attending college in the United States. As a freshman at Baylor, he became known for his competitive nature and willingness to make hustle plays on both ends of the floor. His ability to guard multiple positions is a major plus. In terms of shooting, Jeremy Sochan can be a bit streaky and has room to grow as a perimeter shooter. Considering his size, athleticism, and drive, Sochan should fit well in the NBA as long as he continues to develop his skills.

Johnny Davis was selected tenth overall by the Washington Wizards in the 2022 NBA Draft. There was no question that Davis is the best shooting guard in this draft class. His best skill is simply getting buckets, and he did so quite often during his sophomore year at Wisconsin. Davis thrives in the midrange and has the size to compete inside, but his perimeter game is a bit questionable. He shot just over 30 percent on threes last season, a number he’ll need to increase in the NBA. At times, he can be very inefficient on offense, though there’s no doubt he has the skills to score effectively. Davis is praised most for his grit and determination to winning, something he displayed quite clearly during his time at Wisconsin. That attitude translates to the defensive side of the floor, where Davis is a lockdown perimeter pest who also rebounds extremely well for his size.