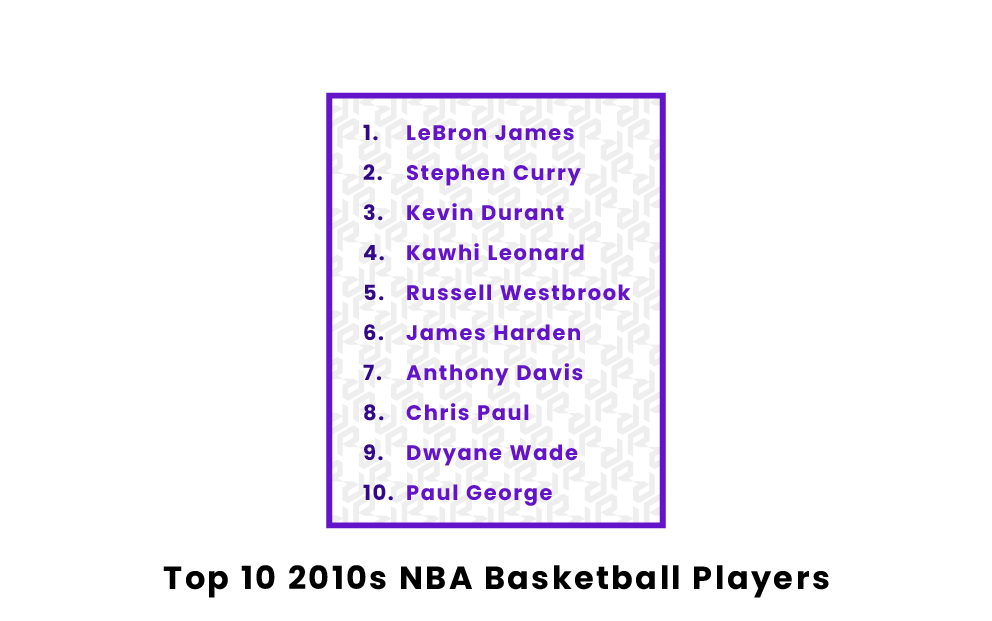 The 2010s were quite a decade for the National Basketball Association (NBA). The league saw seven different players win the regular season Most Valuable Player (MVP) award, nine different teams make it to the NBA Finals, and seven different teams win the championship. Below, the best players from the 2010s are ranked 1-10. The rankings were based on a combination of statistical performance and overall success. It should be noted that the 2010s decade was considered from the 2009-10 season to the 2018-19 season, and all statistics and awards mentioned encompass only those seasons.

Who are the best basketball players of the 2010s?

LeBron James is widely considered to be one of the best players ever, regardless of decade, so it should be no surprise to see LeBron James ranked number one on a list of top players from the 2010s. LeBron began this decade playing one season for the Cleveland Cavaliers before joining the Miami Heat (2011-14), returning to the Cavaliers (2015-2018), and playing the final season of the decade with the Los Angeles Lakers. His 19,550 points scored in the 2010s were the most of any player who played in the decade. LeBron also finished the decade with the fourth-most assists and the tenth-most rebounds.

As far as awards, LeBron won two regular season MVP awards, was named an All-Star every season, and was named to one of the All-NBA teams every season in the 2010s. Lastly, LeBron helped his teams win three titles during this time, two with the Heat (2012, 2013) and one with the Cavaliers (2016). In each of these championships, LeBron was named NBA Finals MVP.

Regarded by many to be the greatest three-point shooter in NBA history, Stephen Curry comes in at number two on this list. It is widely thought that Curry’s style of play, which involves shooting a lot of three-pointers, changed the way the NBA game was played during this decade. He has played his entire career with the Golden State Warriors, and during this decade, he played an instrumental role in helping the team win three championships (2015, 2017, 2018).

Curry won two regular season MVPs in 2015 and 2016, and in 2016 he became the first player in NBA history to win the MVP award by a unanimous decision. Speaking to his main talent, Curry led the decade in three-pointers made (over 400 more than the second most) and had the second-highest three-point percentage. Curry also scored the fifth-most points and had the eighth-most assists during this time. Finally, he was named to six All-Star games and was voted onto an All-NBA team six times.

One of the most prolific scorers in NBA history, Kevin Durant (nicknamed KD), is number three on this list. Durant began the decade by playing for the Oklahoma City Thunder (2010-2016) before playing the final three seasons for the Golden State Warriors (2016-2019). During the decade, Durant’s 19,445 points were second-most of any player, only behind LeBron James. Moreover, Durant actually averaged the most points (28) on a per-game basis of any player in the 2010s. LeBron ended up with more total points because he played in more games (726 vs. Durant’s 695). Although known more for his scoring, KD also finished in the top 25 of all players in both assists and rebounds.

As for awards, Durant made the All-Star team all ten years, was voted onto an All-NBA team nine times, led the league in scoring four times, and won the regular season MVP in 2014. Lastly, while he was with the Warriors, Durant helped the team win two NBA Championships in 2017 and 2018, alongside Steph Curry. In both seasons, KD was awarded the Finals MVP award.

The first player on the list who was not in the NBA when the 2010s began, Kawhi Leonard, is the number four ranked player on this list. Kawhi began his career playing for the Spurs (2011-2018) before playing the final season of the decade with the Toronto Raptors. While his offensive stats were not quite at the same level as the three previous players early on in his career, Kawhi more than made up for it on the defensive end.

In the 2010s, Kawhi had the third-highest steals per game of any player, led the league in total steals in 2015, and despite not being in the league the first two seasons, he still finished in the top 25 in total steals for the decade. Leonard also racked up some defensive awards, winning two Defensive Player of the Year awards and being voted onto an All-Defensive team five times. Lastly, he was a member of two championship teams, winning one with the Spurs in 2014 and one with the Raptors in 2019. Kawhi was named Finals MVP in each of those years.

The first player on this list to not have won a championship, Russell Westbrook made it to number five on this list due to some incredible statistical accomplishments. Although he has played for other teams in recent years, Westbrook spent the entirety of the 2010s with the Oklahoma City Thunder. Westbrook was near the top of the league in a lot of statistical categories for the 2010s, finishing first in assists, second in steals, fourth in points, and was in the top 20 in rebounds.

Perhaps his greatest statistical accomplishment was averaging a triple double for an entire season. To give an idea of how rare this feat is, when Westbrook accomplished this feat in 2017, he became the first player to do so since Oscar Robertson in 1962. This helped Westbrook win the 2017 regular season MVP. Perhaps more impressively, Westbrook would go on to average a triple double the next two seasons. As for other awards, Westbrook made the All-Star team eight times and was voted onto an All-NBA team eight times in the 2010s.

Like Westbrook, James Harden was not a member of a championship team during the 2010s, but he still comes in at number six on this list thanks to some statistical accomplishments. Harden played from 2009-2012 with the Oklahoma City Thunder before playing the final seven seasons of the decade with the Houston Rockets. For those first three seasons, he played with the aforementioned Kevin Durant and Russell Westbrook on the Thunder. For the decade, Harden finished third in total points, sixth in total assists, and fourth in total steals. In the final two seasons of the 2010s, Harden led the NBA in scoring. He also was able to lead the league in assists in the 2016-17 season.

Towards the beginning of the decade, Harden won the NBA’s Sixth Man of the Year award for the 2011-12 season. The Sixth Man of the Year award is given to the best player each year who comes off of the bench and does not start for most games. Since five players start each game, that is why this award is called the sixth man award. Furthermore, Harden made the All-Star team seven times, was voted onto an All-NBA team six times, and was awarded the MVP following the 2017-18 regular season.

The youngest member of this list, Anthony Davis (nicknamed AD), checks in at number seven. Davis entered the NBA in 2012 as the first overall pick in the NBA draft and played the rest of the decade with the New Orleans Pelicans (previously the New Orleans Hornets until 2012). In a similar fashion to Kawhi Leonard, Davis made his name on the defensive end of the floor. AD led the league in blocked shots three times and made it onto six All-Defensive teams. He also received some overall recognition, making six All-Star game appearances, and was voted onto three All-NBA teams.

On the statistical side, Davis managed to finish in the top 25 for the decade in both blocks and rebounds despite not being in the NBA for the first three seasons. On a per-game basis, Davis led the NBA in blocks for the decade and finished sixth in rebounds. While he did not win a championship with the Pelicans in the 2010s, Davis joined LeBron and the Lakers for the first season of the 2020s and helped the team to a championship that season.

Another player who has yet to win a championship, Chris Paul (nicknamed CP3), is the number eight ranked player on this list. Paul spent the first few seasons of the decade with the New Orleans Hornets from 2009-2011, joined the Los Angeles Clippers from 2011 until 2017, and then spent the last two seasons of the 2010s with the Houston Rockets.

For the decade, Paul led the NBA in steals and steals per game as well as assists per game (second in total assists). Despite being known more for his passing and defensive skills, Paul was in the top 25 for total points in the 2010s. Additionally, Paul made seven All-Star teams, seven All-Defensive teams, and six All-NBA teams. CP3 also managed to lead the NBA in steals for four straight seasons from 2010-2014, and assists in the 2013-2014 and 2014-2015 seasons. Just about the only thing Paul has not done is win a championship, but he still had an incredibly successful decade.

The only retired player on this list, the number nine ranked player, is Dwyane Wade (nicknamed D-Wade or The Flash). Wade started the decade with the Miami Heat, with whom he played until 2016, before playing for the Chicago Bulls (2016-17) and the Cavaliers (2017-18). He played the final season of the decade and ended his career in 2018-19, back with the Heat.

Despite the fact that he was mostly on the decline his final few seasons, Wade still managed to score the ninth most points of anyone in the 2010s and finished in the top 25 in both steals and assists. D-Wade also was named to eight All-Star teams, made four All-NBA teams, and won the MVP of the 2010 All-Star game. Alongside his good friend LeBron James, Wade helped to lead the Miami Heat to back-to-back NBA championships in 2012 and 2013. In the decade prior, Wade helped lead the Heat to their first title in franchise history in 2006.

The final player on this list is Paul George. Drafted in 2010, George played for the Indiana Pacers from 2010-2017 and the Oklahoma City Thunder from 2017-2019. Throughout the 2010s, George finished 16th in total points scored and was ninth in total steals. In the 2018-19 season, George led the entire NBA in steals. He also was voted onto five All-NBA teams, four All-Defensive teams, and made six All-Star games.

Moreover, George showed rapid improvement early in his career, winning the NBA’s Most Improved Player award for the 2012-13 season. While he does not have a championship, when George was with the Pacers in 2013, the team came within one win of making it to the NBA finals. However, they lost to Lebron James, Dwayne Wade, and the Miami Heat in the Eastern Conference Finals.

While the 20 players below did not crack the top 10 list, they still deserve recognition as honorable mentions. They are listed in alphabetical order by last name.

Who is the best basketball player from the 2010s?

While there may be some debate, most would say that the greatest basketball player of the 2010s was LeBron James. As was mentioned above, LeBron scored the most points of any player, won three regular season MVP awards, and three Finals MVP awards. Moreover, LeBron played in eight straight NBA finals in the decade from 2011-2018, becoming only the fifth player in NBA history to do so and the first since the 1960s. Overall, LeBron’s sustained level of excellence makes him the greatest player of the 2010s.

Who scored the most points in the 2010s?

Which team won the most championships during the 2010s?

During the 2010s, the team which won the NBA most championships was the Golden State Warriors with three titles. The Warriors won in 2015, 2017, and 2018. The Warriors also made the NBA finals in 2016 but lost to the Cleveland Cavaliers. The only other team to win multiple championships during this decade was the Miami Heat, who won in 2012 and 2013. Overall, the Warriors will go down as the best team of the 2010s decade.