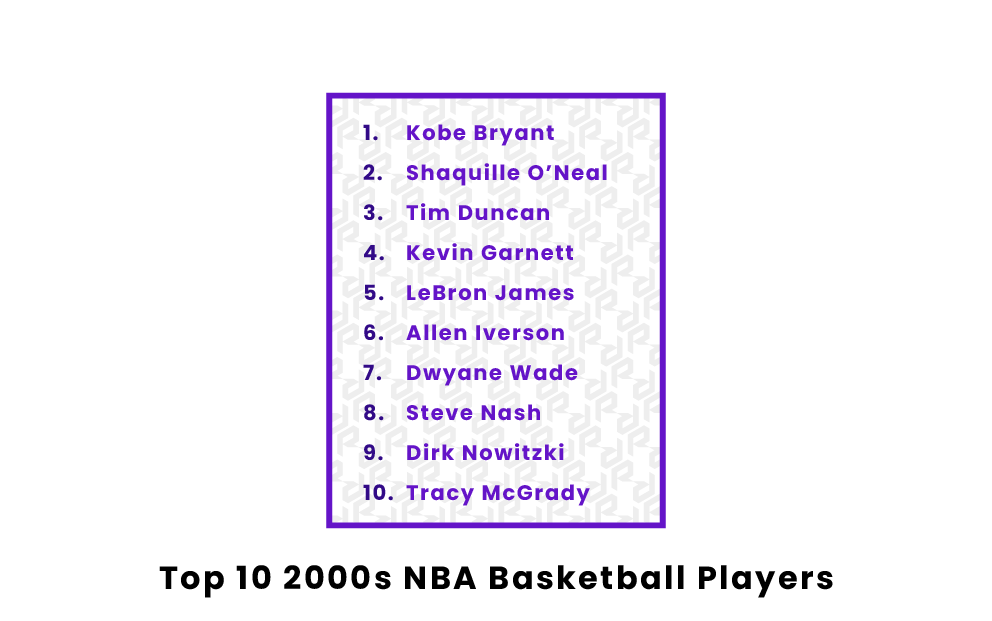 The National Basketball Association was at its most competitive during the 2000s, as the game was evolving into a newer, faster-paced game. Players had a passion for winning, and this decade bred some of the finest talents the league has ever seen. Below are the ten best NBA basketball players of the 2000s.

Who are the best basketball players of the 2000s?

When talking about Kobe Bryant’s legacy, there is no shortage of places to begin. The self-proclaimed “Black Mamba” did it all in his first full decade of competition, starting it off with three straight NBA titles. Not long after, Shaquille O’Neal departed from the Lakers, and it was clear that the Lakers were now solely Kobe’s team. Now that Bryant had the iconic Los Angeles limelight all to himself, he quickly elevated himself to a status few athletes have ever reached. Kobe began to score at an unprecedented rate and even managed to average 35.4 points for the entirety of the 2005-2006 season, a season that included his legendary 81-point performance, the second-highest single-game point total in NBA history. In 2008, Kobe nabbed his first MVP and refined his skills, bringing the Lakers back to the finals. The very next year, Kobe won the 2009 NBA Finals in five games and won his first Finals MVP award, cementing himself as one of the best ever to play the game and the very best of the 2000s.

Shaquille O’Neal paired his unstoppable skill set with an infectious personality to become one of the most recognizable figures in all of sports. O’Neal was often criticized during his playing career for his work ethic and antics on and off the court, but these critics soon realized that nothing would get in the way of his dominant play. Shaq dominated aside Kobe Bryant to win the first three NBA Championships and Finals MVP awards in the decade, following this up with another championship four years after. O’Neal’s style of play has never been replicated due to his game stemming from his physical stature. O’Neal spent his time outmuscling his competitors under the basket, averaging 23.1 PPG and 10.6 RPG for the decade. Despite his production slowing down due to age at the end of the decade, O’Neal still managed to be the most dominant big man in the league and used his strength to strike fear in anyone that had to guard him.

Tim Duncan may fly under the radar due to his fundamental style of play, but the Spurs’ big man spent the 2000s putting up Hall of Fame statistics and winning while doing so. Duncan won three of his five NBA Championships during this decade, showcasing his all-around style of play that could be used on just about any defender. Duncan’s greatness is unparalleled at the power forward position, as his ability to dominate in the post with a mixture of force and finesse made him a feared opponent during the gritty 2000s era of basketball. His signature shot was the bank shot, a lost art in basketball that Duncan equipped in his arsenal, and ultimately became the face of the fundamental shot. Duncan’s shooting touch when it came to using the backboard was second to none and despite his lack of flashiness, Duncan performed exceptionally during his decade of dominance.

It is hard to think of a basketball player who was more passionate about winning than Kevin Garnett. Garnett had every skill necessary to be a generational talent, but his biggest asset was his willingness to say or do whatever he needed to in order to have the upper hand. His time with the Timberwolves took up most of his playing time during the 2000s, where he managed to be named MVP and lead his team to deep playoff runs. It wasn’t until the 2007-2008 season that Garnett became a Boston Celtic and made it to the NBA Finals, where they handed Kobe and the Lakers a finals loss in six games. Players of the 2000s dreaded facing off against Garnett, as his opponents would describe it as a mental war against someone who would sacrifice everything for the game. The NBA during the 2000s was a league where effort trumped talent, and Garnett had both.

“King James” entered the NBA during the 2003-2004 season, but his six active seasons during the 2000s were proof that a generational talent had entered the league. LeBron James joined an abysmal Cavaliers squad that drafted him in search of deliverance, and after his rookie campaign, the team began to form into something special. With each year, LeBron refined his game, transforming Cleveland into a consistent playoff team. LeBron made it to his first NBA Finals in 2007, coming up short but ending with the most total points, assists, and steals out of any player in that year’s playoffs. The Eastern Conference was particularly competitive during the decade, with defensive powerhouses such as the Detroit Pistons and Boston Celtics. Despite these highly intimidating rosters, LeBron proved his unstoppability by averaging over 30 PPG for two of his six seasons in the 2000s. LeBron wasted no time showing the league that he did not need any help to become one of the most prolific players the game has ever seen.

Allen Iverson was the most dangerous player in the league at the turn of the century, and his superstardom continued all the way through the 2000s. Iverson was never the biggest or the strongest on the court, but for what he lacked in size, he made up for with his scoring ability. Iverson was a one-man wrecking crew, averaging over 30 PPG four times during the decade thanks to his historic handles and quick footwork. In 2001, Iverson took the Philadelphia 76ers to the NBA finals in what was one of the most impressive seasons we’ve seen from a star player such as Iverson. Iverson put up 31.4 PPG for the season and capped off his valiant effort in the finals by stepping over Tyronn Lue after hitting a mid-range shot over him, one of the most memorable moments in NBA history. Iverson was a player who made the game look easy, and it felt like he had control over his opponents for the entirety of the 2000s.

Despite only playing for six seasons during the 2000s, Wade had tremendous individual and team success during the decade. Wade secured his first NBA title just three seasons into his career, capturing his only Finals MVP alongside an aging but still productive Shaquille O’Neal. Wade’s game proved to be well-rounded and he was known as a threat on both sides of the ball, managing to make two All-Defensive First Teams while averaging 25.2 PPG. Although not dominant in size, Wade’s unreal athleticism as a guard made him an overpowering force for opposing guards, players who often could not match his raw physical abilities. Alongside the plethora of threatening aspects to his game, Wade was given the nickname “The Flash” because of his lightning-fast movement on the court, an attribute that elevated his arsenal to one of the best the game has ever seen. Wade’s career prime came in the latter half of the 2000s, where he solidified his place in the league as a player who could win in any way he had to.

Steve Nash took the term floor general to another level, changing the game every time he stepped on the court. Nash’s knack for finding the open teammate, paired with his stellar finishing around the rim, made him a confusing player to guard. Nash’s basketball IQ was always apparent, and while his stats may not be as flashy, his style of play was beautiful to watch and proved to be successful. Nash ran the pick-and-roll offense to perfection, but what is not discussed enough is his shooting efficiency. Nash shot a whopping 43.6 percent from beyond the arc, the highest mark of any player during the 2000s. Despite falling short of any playoff success, Nash was the face of the Suns’ offense, who were nicknamed the “seven seconds or less” offense due to their incredible speed with the basketball in their hands. Nash claimed back-to-back MVP awards in 2005 and 2006 and picked defenses apart however he needed to.

Dirk Nowitzki forever changed the idea of what a “big” player should exemplify with his revolutionary style of play. In an era where physical dominance and brawn were praised, Nowitzki used his shooting touch and length to score over defenders. This worked to a charm, as Nowitzki averaged 23.7 PPG for the decade while shooting 47.5 percent from the field. Not only could DIrk put up impressive numbers, but he proved that his greatness could lead a team deep into the playoffs. Dirk came up short in his lone finals appearance of the 2000s, but his stellar playoff performance helped many realize how special of a talent Nowitzki was. The beauty of Dirk’s game was his consistency, as his decade of dominance had no lowlights and instead featured a player who averaged 20 points per game with ease.

When it comes to peaks, Tracy McGrady may have one of the highest in NBA history. During the 2000s, McGrady averaged 24.4 points, 6.3 rebounds, and 5.2 assists, a ridiculous stat line to maintain for an entire decade. McGrady made the game seem easy, showing off with flashy dunks in-game and hitting shots that most could only dream about. McGrady never found team success during his career, but his greatness was still obvious through his individual skill. McGrady played for three different teams during the 2000s and could never quite settle down with a team, which greatly hindered his chance to be a part of a championship team. This never slowed down his production, as McGrady put up 26.8 PPG on 45.7 percent shooting during his first year in Orlando, his best shooting year percentage-wise. Injuries eventually slowed his career down, but at his best, McGrady was an unprecedented scorer who always found a way to produce for his team.

Who is the best basketball 2000s player of all time?

Kobe Bryant was the best player of the 2000s, winning three NBA Championships during the decade and being selected as an All-Star in every season. Kobe received many comparisons to Michael Jordan, but his playstyle paved the way for the 2000s style of basketball, which was intense and fast-paced. This led Bryant to a decade of utter humiliation of his opponents, something Bryant took immense pleasure in doing.

Who scored the most points in the 2000s?

Kobe Bryant tallied 21,065 points during the 2000s, the most of any player. He averaged 28.2 points for the decade and even managed to score 81 points in a single game, the second-highest scoring game in NBA history. Bryant put up numbers that might never be matched again, amassing 30 PPG season after season, and eventually leading the decade in scoring by a margin of 1,900.