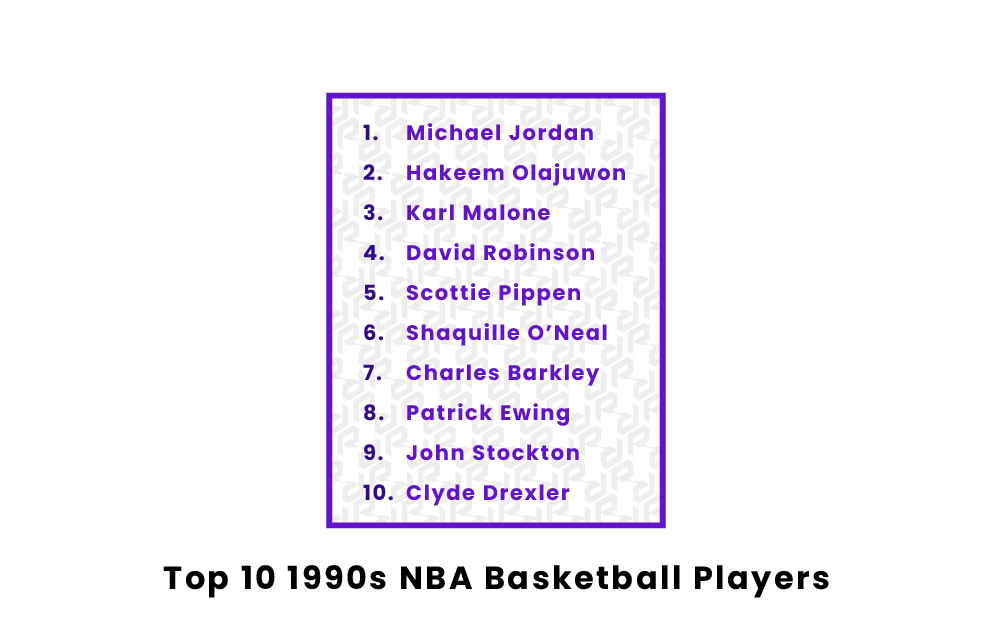 The 1990s era of basketball is regarded as one of the best eras in NBA history. It was a decade that featured one dynasty in Michael Jordan’s Chicago Bulls, but also the beginning of a new one in the San Antonio Spurs led by Tim Duncan and David Robinson. Read below to learn about the greatest players of the 1990s.

Who are the best basketball players of the 90’s of all time?

In the seven full seasons Michael Jordan played during the 1990s, his Chicago Bulls won six championships. He was a two-way force unlike any other, with a killer instinct that rivals none. Jordan brought plenty of iconic moments to basketball throughout his playing days, but perhaps his greatest came in Game 6 of the 1998 NBA Finals against the Utah Jazz. Trailing by one point late in the 4th quarter, Jordan stole the ball from Karl Malone, and on the next possession, he pulled up from roughly 15 feet to seal the win for Chicago and the series. Many argue that if Jordan hadn’t retired in the mid-1990s to play baseball, or after his sixth ring in 1998, he would have even more finals wins. He was a four-time MVP during the decade, and was named the MVP of every finals he played in. As a result, Jordan is arguably the greatest basketball player of all time.

Nicknamed “The Dream”, Hakeem Olajuwon wasn’t the most physical center of his era, but he was the best. His post game is arguably the greatest of all time, as he could shake any defender for an easy bucket. He was also a phenomenal defender, making three all-defensive teams during the decade. Olajuwon is responsible for perhaps the greatest individual season of all time in 1993-94. That year, he averaged over 27 points and 12 rebounds en route to becoming the first player in league history to win NBA MVP, NBA Defensive Player of the Year, and NBA Finals MVP, all in the same season. In that Finals, Olajuwon stifled fellow top-10 1990s player Patrick Ewing, holding him to just 36% shooting. Meanwhile, Hakeem led both the Houston Rockets and New York Knicks in scoring in all seven games of the series. Olajuwon’s Rockets would repeat as champions the following season, sweeping Shaquille O’Neal’s Orlando Magic.

If it weren’t for Michael Jordan, Karl Malone could be in consideration for the greatest basketball player of all time. During the decade, Malone’s Utah Jazz made the playoffs every year, including back-to-back finals trips in 1997-98 against Jordan’s Chicago Bulls. His nickname was “The Mailman” for always delivering on the court. Malone played alongside point guard John Stockton for most of his career, and the two revolutionized the pick-and-roll game. Stockton was the passer, and Malone was the receiver. However, Malone got most of the headlines as he was the man piling up the points for the Jazz. He’s a career 25-point and ten rebound player, four-time all-defensive player, and was named to the NBA’s 75th-Anniversary team. The only knock on Malone’s career is that he never won a championship. He was the mailman, but could not deliver a championship.

For most of the decade, David Robinson couldn’t get over the hump despite being one of the best players in the world year-in and year-out. Robinson didn’t have a wingman, but that changed after the 1996-97 season. That season, Robinson played just six games, and the San Antonio Spurs not only missed the playoffs for the first time during his tenure, but also plummeted to just 20 wins. However, the Spurs lucked out in the draft lottery to select a player first overall that would end up being better than Robinson, Tim Duncan. San Antonio quickly rebounded as it made the playoffs in 1998, but lost in the second round to the eventual Western Conference Champion, Utah Jazz. The following year, Robinson finally earned that elusive title, helping defeat the New York Knicks in five games, averaging nearly 17 points and 12 rebounds.

If Michael Jordan was Batman, then Scottie Pippen was Robin for the Chicago Bulls during the 1990s. Pippen was often overshadowed by Jordan, but he was a great player in his own right. Pippen was the original “Point Forward” as he could run an offense like a guard, and had the athleticism to be one of the premier slashing forwards during his heyday. His greatest attribute, however, was his defensive prowess. During the 1991 NBA Finals, it was Pippen who guarded Magic Johnson throughout most of the series, and while Magic still put up a decent 19 points-per-game, he was the only player who could actually frustrate Johnson and the Showtime Los Angeles Lakers. This allowed Jordan to primarily focus on scoring en route to him averaging over 31 points for the series. No matter how great Jordan was, he never won a championship without Pippen.

The reason why Shaquille O’Neal isn’t highest on this list is largely because he peaked during the 2000s, but that doesn’t mean he was a slouch in the 1990s. Shaq was drafted number-one overall by the Orlando Magic in 1992 and quickly became the face of the newly formed organization as he won Rookie of the Year for the 1992-93 season. The following season, the Magic selected point guard Penny Hardaway, and the two immediately became a dynamic duo. In 1995, Shaq and Penny led Orlando to the NBA Finals, but were swept by Olajuwon’s Houston Rockets. The following year, Shaq’s Magic were once again swept. This time by the 72-win Chicago Bulls. O’Neal then took his talents to the Los Angeles Lakers as a free agent that summer, and would later win three championships in a row with Kobe Bryant beginning in 2000. Shaq’s greatest accomplishments came during the 2000s, but he was a fantastic player during the 1990s.

Despite being the fifth overall pick in the 1984 NBA Draft, few could have imagined the success Charles Barkley would have during his career. Barkley was an undersized power forward standing at just 6’6”, but he was relentless on the glass. Charles averaged over 11 rebounds per game during his playing tenure to go along with 22 points. He also never had a season in which he scored less than ten points-per-game. Unfortunately, Barkley never was able to capture a championship. Barkley’s Phoenix Suns made the 1993 NBA Finals, and even had home-court advantage against the Chicago Bulls. Barkley averaged 27 points and 13 rebounds in that series, however, Jordan and Pippen proved to be too much to handle, ousting the Suns in six games. Since his career ended in 2000, Barkley has become a TV personality alongside other 1990s players such as Shaquille O’Neal and Kenny Smith.

Patrick Ewing was said to be the savior of the New York Knicks before he even set foot on the court for them. While Ewing never won a ring, the 1985 number-one overall pick lived up to his potential becoming one of the premier centers of the 1990s. Ewing was a career 20-point, ten rebound player, and trailed only Karl Malone and Michael Jordan for total scoring during the 90s. Like many players, however, Ewing didn’t win a championship despite having two cracks at the finals. First, Ewing led the Knicks to the 1994 NBA Finals and had the Houston Rockets up 3-2 in the series, but would end up losing in seven games. Ewing’s team made the finals again in 1999 against the San Antonio Spurs, but he missed the entire series, and as a result, New York lost in five games.

It took a while for John Stockton to develop as a point guard, but when he did, he became arguably the greatest passer in NBA history. Stockton led the league in assists for a record nine years in a row from 1988-1996 as he delivered precise passes to teammate Karl Malone off the pick-and-roll. Stockton has four of the highest assists seasons in NBA history. In fact, Stockton is one of three players to record 1,000 assists in a season, and is the only one to do it in multiple years. But he wasn’t just a great passer. During his heyday, he was one of the best perimeter shooters in the game, and was a surprisingly great defender given his 6’1” frame. Like Malone, Stockton never reached the mountain top of basketball as he lost in the NBA Finals to the Chicago Bulls in both 1997 and 1998. Still, Stockton is a member of the NBA’s 75th-Anniversary team, and was also on the famed 1992 United States Olympic team, nicknamed the “Dream Team”.

The Houston Rockets were struggling nearing the 1995 NBA trade deadline, and with the Portland Trail Blazers nearing a rebuild, Clyde Drexler was on the block. Houston acquired arguably the best player at the deadline, and he proved to be the missing piece for the Rockets’ title defense. In the 1995 NBA Finals, Drexler put up MVP-caliber numbers, averaging 22 points and ten rebounds in a four game sweep of the Orlando Magic. But, before his crowning moment, Drexler was the heart and soul of the Trail Blazers. In 11 full seasons in Portland, Drexler led the Blazers to the playoffs every year, including two trips to the finals (1990 and 1992). Drexler averaged roughly 20 points-per-game for his career and is considered to be one of the purest scorers in NBA history, despite never winning a scoring title or league MVP.

Who is the best basketball 1990’s player of all time?

Michael Jordan is universally regarded as one of the greatest basketball players of all time, and was the clear choice to be selected best player of the 1990s. During that decade, Jordan averaged more points than anyone, won more rings than anyone, and won more MVPs than anyone. Not only did he win six championships, but he also never lost in the finals. He was the player that everyone seemed to fear the most, and for good reason.

Which NBA Player scored the most points in the 1990’s?

Michael Jordan may have averaged more points than anyone during the decade, but Karl Malone scored the most points. Malone is the only player to score at least 20,000 points during the 1990s, accumulating 21,370. In fact, Malone only had one year during the decade in which he piled in less than 2,000 points, and that was the lockout-shortened 1999 season.

Who was the last active NBA player from the 1990's?

There are no more active players who played in the 1990s, but the last player to retire that was drafted in the decade is Vince Carter. Carter played just one full season in the 90s, as he was a rookie in 1999. Carter went on to become an eight-time All-Star and Two-Time All-NBA player during the 2000s. At the age of 43, Carter’s last game came abruptly on March 11, 2020, with the Atlanta Hawks as the NBA season shut down due to the COVID-19 pandemic.