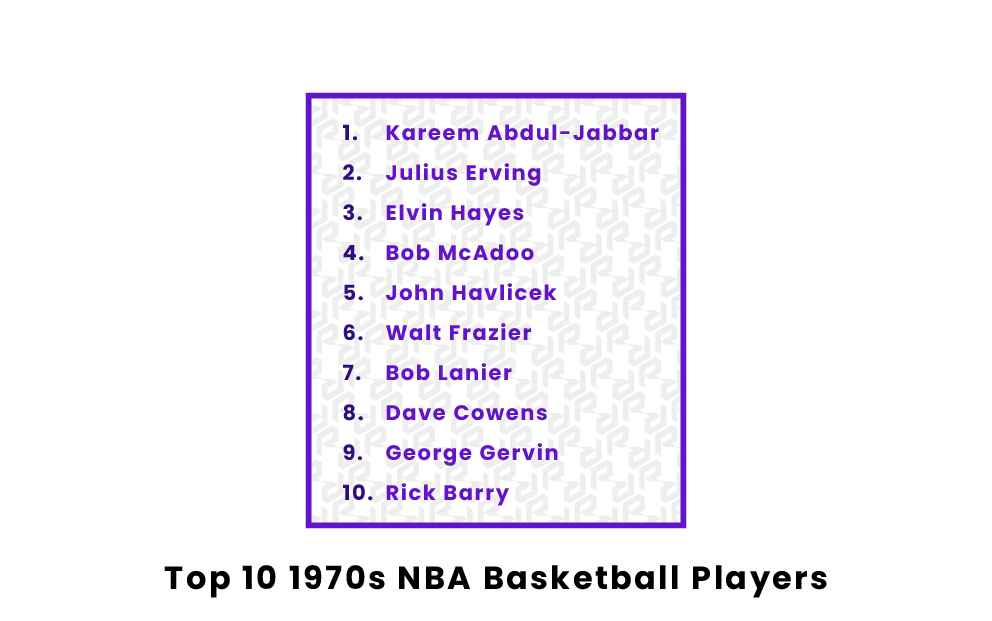 The 1970s were a golden age for basketball. The pace of play increased, players were given more freedom, and the talent in the league was at an all-time high. Though the game was still primarily dominated by big men, the seventies saw a number of Hall of Fame wings, as well as exceptional guards. In addition, the decade saw the merging of the ABA and the NBA, the two top leagues of the time. This brought an even greater influx of stars to the NBA, making for a great new era of basketball. To learn more about the top ten players of the decade, keep reading below.

Who are the best basketball players of the ‘70s of all time?

When it comes to the 1970s, there was no greater basketball player than Kareem Abdul-Jabbar. In fact, Abdul-Jabbar’s game has transcended eras, as he remains one of the greatest players to ever pick up a basketball. He won six MVPs during his career, tied for the most all-time, and was also a six-time NBA champion. He absolutely dominated the seventies, leading the NBA in points scored and blocks for the decade, as well as recording the second-most rebounds. Abdul-Jabbar was a force on the offensive end, armed with a skyhook shot that was seemingly unstoppable. On defense, he was one of the most feared rim protectors of his time, swatting away every attempt that was thrown up. Abdul-Jabbar also made 19 All-Star teams during his career and was a two-time Finals MVP, recording one of the most legendary and impactful resumes in league history.

Easily the greatest ABA player ever, Julius Erving had no trouble making the transition to the NBA in 1976. He was an All-Star every year of his career, racking up 16 selections while dominating both leagues. He was also a three-time MVP in the ABA during the seventies, capturing a three-peat in the award from 1974-1976. Erving was one of the defining figures of the game during the decade, combining exceptional athleticism and finesse in a style that has remained popular all these years later. He finished his career eighth all-time in both points and steals as a player who truly had a complete game. His ability to dominate as a wing was something the NBA had not seen much of before, and his mark on the game will always be remembered.

A member of the NBA’s 75th Anniversary Team, Elvin Hayes was one of the most recognizable faces of the NBA in the 1970s. He led the league in minutes played for the decade, and also grabbed more rebounds than anyone else. He was no slouch when it came to scoring either, recording the second-most points of the decade behind only Abdul-Jabbar. Hayes was a 12-time All-Star, being selected in each of his first twelve years, and was also a six-time All-NBA selection. He never averaged fewer than 10 rebounds in the seventies, and also never dipped below two blocks per game. Although Hayes was only 6’9”, he played the center position with more ferocity than nearly anyone else in the game, and was known as one of the toughest competitors in the league.

Bob McAdoo was a poster child for seventies basketball. He debuted in 1972 and proceeded to make an All-Star team seven times during the decade, continuing the great legacy of big men in the NBA. He was named MVP of the 1974-75 season, a year that came in the middle of a dominant run for the Buffalo Braves. He led the league in scoring three straight times from 1974-1976, pouring in over 30 points per game in each season. He was also a double-double machine, averaging over 12 rebounds per game for the decade. He made the All-NBA Second Team in 1974 and was promoted to the First Team the following year. Although he began to struggle with injuries towards the end of the decade, there’s still no doubt that McAdoo was one of the most impressive players of his time.

Though John Havlicek debuted in 1962, he was still very much in his prime when the seventies came around. He was named an All-Star every year of the decade that he played, from the 1969-1970 season through the 1977-78 season. Havlicek did retire shortly before the three-point line was introduced to the NBA, but he was still known as one of the best jump shooters in the league. His impact didn’t stop on the offensive end of the court; Havlicek also made eight All-Defensive Teams in his career, epitomizing what it meant to be a two-way player. He was an All-NBA selection every year from 1970-1976, and he also won two championships with the Boston Celtics in the seventies, one in 1974 and again in 1976.

Known as “Clyde” Frazier, Walt brought the razzle dazzle to Madison Square Garden in the seventies. He was easily the best point guard of the era, and he led his New York Knicks to NBA championships in 1970 and 1973. He was an All-Star every year from 1970-76, and from 1970-75 he was named to both an All-NBA Team and an All-Defensive Team for each season. Frazier had a flair for style that had been sparsely seen in the league before his debut, but once he arrived, all eyes were glued on him. Though Frazier was a model point guard, running the offense and dishing out a plethora of sweet dimes, he also possessed a skill that would foreshadow the direction of the position. His ability to rebound as just a 6’4” guard was tremendous, averaging six boards per game for his 13-year run in the league.

Another player who made his debut after the decade was already underway, Bob Lanier hit the ground running. He made the All-Star Game in four of his first five seasons and in 1974 was named the All-Star Game MVP. Overall, he made seven All-Star teams during the decade, playing as one of the best centers of the era. He averaged over 22 points and 11 rebounds per game for the seventies, and also rejected over two shots per game. He was fifth in total minutes played for the decade and was also fifth in points scored. Lanier was also unusually-adept at shooting free throws for a big man, averaging 77 percent for his career. Playing for the Detroit Pistons until he was traded in 1980, Lanier was the heart and soul of his teams and promoted a tough, intense culture.

Nicknamed “Big Red” for his ginger hair, Dave Cowens was the anchor for many great Boston Celtics teams during the seventies. He won two championships alongside Havlicek in 1974 and 1976, and was also extremely successful as an individual player. He made eight All-Star games in the seventies, only missing out in his rookie year and in 1978-79 when he was injured. Though he was a great offensive player, Cowens made his biggest impact on defense, being named to three All-Defensive teams in his career. In 1973, just his third season in the league, he won the MVP award after averaging 20 points and 16 rebounds per game. Cowens was only 6’9” at the center position, but he was one of the most prolific rebounders of the era. He pulled down 14 rebounds per game from 1970-1980, and any game that he finished without a double-double was a rarity.

With one of the coldest nicknames in NBA history, “Iceman” George Gervin was one of the best scorers in the NBA during the seventies and early eighties. After coming over from the ABA in 1976, Gervin led the NBA in scoring three times during the decade, doing so in consecutive years from 1978-1980. Overall, he averaged 26.6 points per game for the seventies, the third-most of any player. Gervin made 12 All-Star teams between the ABA and NBA, and was an All-League player nine times. He is a member of the All-time ABA Team as well as the NBA’s 75th Anniversary Team, and his talent as a pure scorer will be remembered forever. In addition to scoring, Gervin was also a proficient rebounder and excellent defender.

Best-known for his underhand free throw technique, Rick Barry was not someone to be taken lightly on the basketball court. He was a 12-time All-Star selection between the ABA and NBA, and also made a total of 10 All-League teams between the two leagues. He was a menace on the defensive side of the ball, racking up 400 more steals than any other player in the seventies. Like Gervin, he is a member of both the All-Time ABA Team and the NBA’s 75th Anniversary Team. Though Barry had many of his best seasons in the ABA, he also found success on a team scale in the NBA. In 1975, he led the San Francisco Warriors to an NBA championship, and he was named Finals MVP that year as well. And while his free throw routine may have looked silly to some, it worked like a charm; Barry’s 91.3 percent free throw percentage was the best of anyone in the decade by over seven percentage points.

Who is the best basketball 70s player of all time?

The best basketball player of the 1970s was Kareem Abdul-Jabbar. Abdul-Jabbar was a six-time MVP and six-time NBA champion, cementing his legacy as not just the greatest of the decade but one of the greatest in league history. He led all players in the seventies in scoring and blocks, and he was second in both minutes and rebounds.

Who scored the most points in the 70s?

The player who scored the most points in the 1970s was Kareem Abdul-Jabbar. Abdul-Jabbar was dominant in all aspects of the game, but he was particularly unstoppable on offense. His patented skyhook was unguardable, and he used it to score over 22,000 points during the decade. Overall, he averaged 28.6 points per contest from 1969-70 through 1979-80.

Who is the last NBA player from the 70s?

The last remaining player from the 1970s in the NBA was Robert Parish. Parish was drafted in 1976 by the Golden State Warriors and didn’t retire until 1997, capping off a 21-year career. Parish was able to stick around for so long because of his great talent as a basketball player, making nine All-Star teams during his career as well as winning four NBA championships.