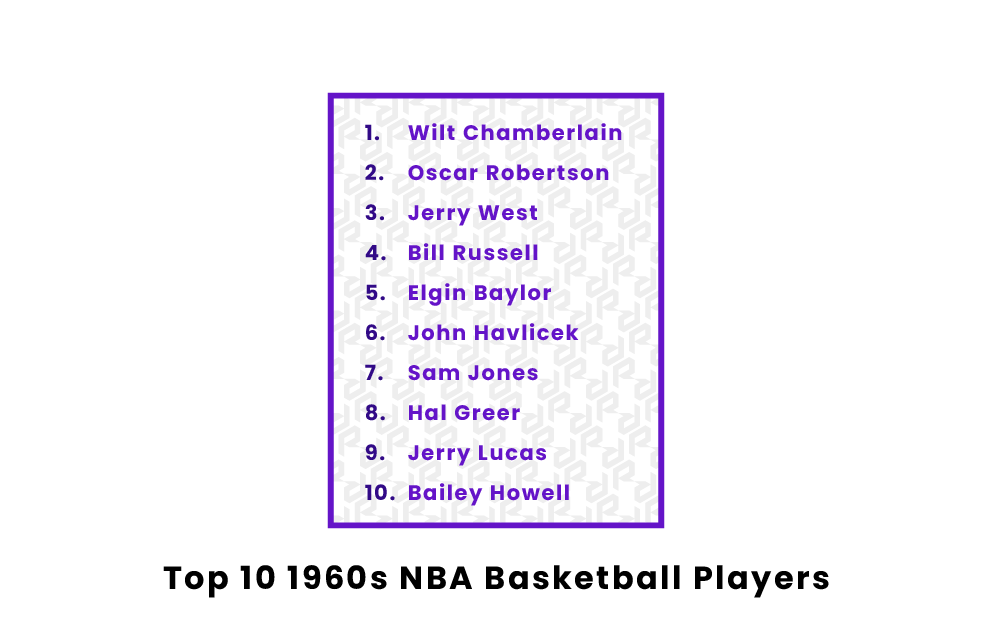 The NBA is one of the most successful sports organizations in the entire world, which also means it has a rich and extensive history. It is often difficult to compare players across eras as different rules impact the game in different ways, but the 1960s was one of the most important time periods for the league, and the talent active then is a huge reason the league is as successful as it is now. Keep reading below to find out more about the ten best NBA players of the 1960s.

Who are the best basketball players of the 60s of all time?

Hall of Famer Wilt Chamberlain is one of the most dominant NBA players of all-time, and he played from 1959-1973, meaning his best years came during the 1960s. During the 1959-60 season, as a rookie, Wilt led the entire league in points, rebounds, and minutes per game, while also winning MVP, Rookie of the Year, and All-Star Game MVP. He would hardly slow up from there, as just two seasons later at the age of 25, he recorded one of the greatest statistical seasons ever. In 1961-62, Wilt averaged 48.5 minutes per game, more than a whole game, which led to him scoring 50.4 points per game, grabbing 25.7 rebounds per game, and blocking an unbelievable number of shots in an era before blocks were recorded.

After being selected with the third overall pick in the 1959 NBA draft by the Philadelphia Warriors, Wilt played 14 NBA seasons where he would lead the league in points seven times, rebounds 11 times, field goal percentage nine times, minutes played eight times, triple-doubles twice, and assists once. Chamberlain would also famously score 100 points and grab 25 rebounds during a game against the New York Knicks. He is currently the all-time NBA leader in total rebounds, rebounds per game, and minutes per game, while also being top three all-time in points per game, two-point field goals, win shares, and win shares per 48.

Oscar Robertson is an NBA Hall of Famer that saw his best years during the 1960s, as he was drafted first overall by the Cincinnati Royals in the 1960 NBA Draft, and would retire following the 1973-74 NBA season. Robertson never experienced much playoff success with the Royals, but that was despite his efforts, as he would win Rookie of the Year and lead the NBA in assists and assists per game at age 22. The “Big O” was able to do it all on the court, leading the NBA in triple-doubles six times during his first six seasons in the league. His second year in the league, he would average a triple-double while playing 44.3 minutes per game across 79 games.

He never scored less than 24.7 points per game during the decade, averaging over 30 in six of the ten seasons. Robertson would finish top-10 in MVP voting eight times during the 1960s alone, and would finally win his title with the Milwaukee Bucks in 1970-71. Oscar Robertson currently sits top-10 all-time in NBA points per game, assists, assists per game, free throws, free throw attempts, minutes per game, offensive win shares, and triple-doubles.

Jerry West’s career closely mirrored Robertson’s, which is fitting considering that the Minneapolis Lakers selected West with the second overall selection in the 1960 NBA draft, one spot after the Royals selected Robertson. Jerry West is one of the game’s greatest offensive players ever, and the league honored him by using his silhouette as the NBA logo, earning West the nickname “The Logo.”

During the 1960s, he would average over 30 points on four separate occasions and over 25.9 over five others, which is part of the reason West is sixth all-time in career points per game. Although he wouldn’t win his ring until 1972, West would guide the Lakers to the NBA Finals six times during the decade, falling short each time. However, West’s performance in the 1968-69 NBA Finals would win him the league’s first ever Finals MVP due to his heroic effort that consisted of 37.9 points, 7.4 assists, and 4.7 rebounds per game in a series that would take all seven games.

Whenever the conversation of greatest NBA player ever comes up, Bill Russell’s name is sure to be a part of the conversation due to the fact that he won 11 NBA titles, made 11 All-NBA teams, was an All-Star 12 times, and was named MVP five times all in just 13 seasons. Russell experienced some of his success in the later part of the 1950s, but he played all throughout the 1960s, with his career beginning in 1956 and ending after the 1968-69 season. He would help guide a Celtics team, on and off the court, to nine titles during the 1960s, only failing to win in 1967, which prevented them from winning 11 consecutive titles dating back to 1959.

Bill Russell is known as one of the greatest defenders of all time despite playing in an era before defensive metrics were kept and most of the league’s awards did not yet exist. A force on the glass, Russell never averaged less than 18.6 rebounds per game during his career, leading the league in rebounds per game five times and averaging over 22 rebounds during nine separate seasons. The Celtics legend currently sits second in rebounds, rebounds per game, minutes per game, and is the all time leader in defensive win shares by a considerable amount.

Widely regarded as one of the greatest NBA players to never win a ring, Elgin Baylor had one of the greatest NBA careers ever that mostly took place during the 1960s. The Minneapolis Lakers actually drafted Baylor twice: the first time was with pick 91 in the 1956 NBA Draft, and the second was with the first overall pick in the 1958 NBA draft. Baylor would spend his entire career with the Lakers, even playing nine games during the 1971-72 season with the team before they would go on to win the NBA Championship, but due to his minimal contributions, Baylor was not given a ring.

John Havlicek is a NBA Hall of Famer that experienced about as much success as anybody in NBA history, only Sam Jones and Bill Russell have won more titles. He wasn’t just dragged along to those championships though, as Havlicek was a key member of those title winning teams with Russell and Jones.

The Celtics selected Havlicek with the ninth pick in the 1962 NBA draft and it wouldn’t take him long to make an impact as he would average 14.3 points, 6.7 rebounds, and 2.2 assists and be named first Team All-Rookie. He was one of the best perimeter defenders not just in Boston, but possibly the entire league during the 1960s. Twice Havlicek would lead the league in triple-doubles, no small feat for a 6’5” small forward. In his 16 year career, Havlicek would average over 20 points per game in eight different seasons and lead the league in minutes played per game.

The Celtics dominated during the 1960s because of how many great players they had, so it should be no surprise that Sam Jones is one of the best NBA players of the decade. His remarkable speed, quickness, and ability to make jumpshots was a critical piece of the dominant Celtics teams of this era. Jones had a 12-year career that spanned from 1957-1969, which means that he only played two seasons where did not win a title.

Finishing top-10 in MVP voting on three occasions during the decade, Jones would average more than 18.4 points per game seven times and more than five rebounds per game five times during the decade. In his 12 seasons, he was named an All-Star five times and made All-NBA three times. Jones would be named to the official 50 Greatest Players in NBA history made back in 1996-97 and the 75 Greatest Players in NBA history made by the league in 2021-22.

Hal Greer played for the Syracuse Nationals and Philadelphia 76ers during his 15-year career. The Nationals selected Greer with the 14th pick in the 1958 NBA draft, and although he was a helpful player, he would not truly blossom until his third season. The 1960-61 NBA season was Greer’s third in the league and it would mark the first of ten consecutive seasons where Greer would be an All-Star. During his third season, he averaged 19.6 points, 5.8 rebounds, and 3.8 assists per game.

Jerry Lucas had a Hall of Fame career after being drafted sixth overall by the Cincinnati Royals in the 1962 NBA Draft. It would take him no time to contribute as he would be named Rookie of the Year and First Team All-Rookie in 1963-64 with plenty more success to follow. Lucas never averaged less than 15 points, 14 rebounds, and 2 assists per game during the 1960s. He would also earn five consecutive All-NBA selections during the decade, a remarkable feat that only a few other players in league history have accomplished.

His All-Star game selections also came consecutively, with his best game coming during the 1964-65 All-Star Game when he won MVP after dropping 25 points and 10 rebounds. His last season would be the 1973-74 NBA season, which he played with the New York Knicks. After spending time with the Royals, San Francisco Warriors, and New York Knicks, Lucas retired with career averages of 17 points, 15.6 rebounds, and 3.3 assists per game.

Bailey Howell is a Hall of Famer that had a journeyman career as he played for four different franchises during his 12 years in the NBA. After the Detroit Pistons selected Howell with the second overall pick in the 1959 NBA Draft, he would make an immediate impact and only continue to get better throughout the years. He was voted an All-Star six times in seven years during the decade.

He would make a stop in Baltimore to play for the Bullets before heading to the Celtics in Boston, where he would win both of his rings. Howell was a crucial member of those Celtics title winning teams, as both seasons he averaged nearly 20 points and 10 rebounds. The Philadelphia 76ers would be Howell’s last stop before retirement at age 34. The Hall of Famer would retire with career averages of 18.7 points, 9.9 rebounds, and two assists per game.

Include a bulleted list of at least 20 other players that didn’t make the top 10 list above, put in alphabetical order.

Who is the best 1960s basketball player of all time?

Although there were several all-time great players that played during the 1960s, no other player’s accomplishments during the era can compare to Wilt Chamberlain’s. He scored over 50 points in 118 different games, which should come as no surprise considering he averaged more than 50 points during the 1961-62 NBA season. He was also a dominant shot blocker and rebounder, never averaging less than 18.4 rebounds per game in a single season.

Who scored the most points in the 60’s?

Wilt Chamberlain scored the most points in the NBA during the 1960s as a member of the Philadelphia Warriors, San Francisco Warriors, and the Philadelphia 76ers. Between the 1959-60 and 1968-69 NBA seasons, no player scored more than Wilt Chamberlain did, as he recorded 27,098 points. This makes up over 86% of Chamberlain’s career points and it would still be good enough to place 14th in points scored in NBA history.

Who is the last NBA player from the 60's?

Kareem Abdul-Jabbar was the first overall selection in the 1969 NBA Draft, which means he made his debut in the fall of 1969 before going on to play 20 seasons, which makes him the last NBA player in the league that played during the 1960s. Abdul-Jabbar would play in 1,560 games during his career and be a huge reason for the league’s success following the retirements of NBA legends Wilt Chamberlain, Oscar Robertson, and Jerry West.