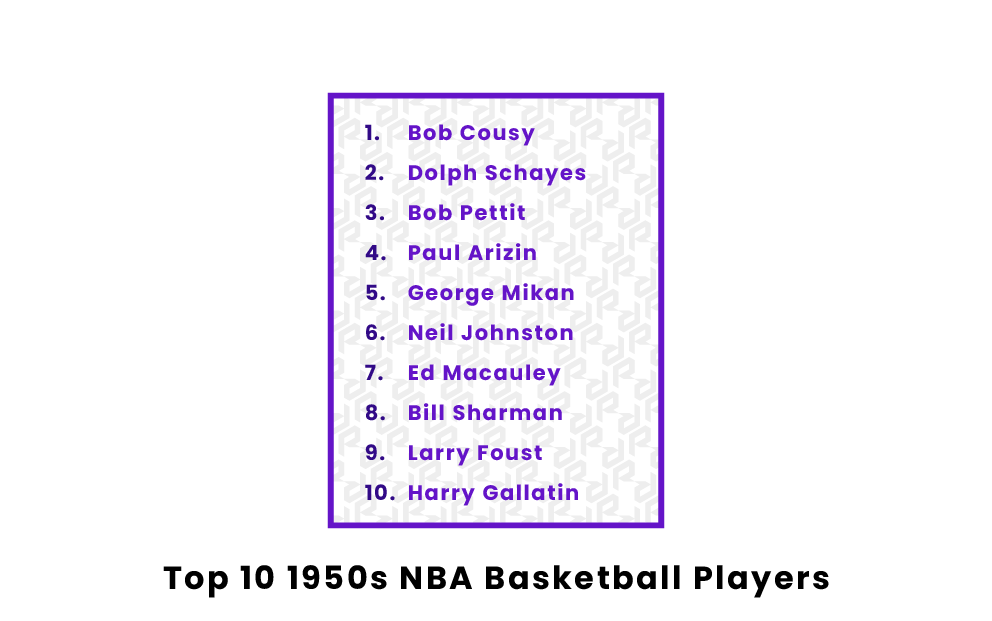 Since the National Basketball Association (NBA) began in 1946, the 1950s were the first full decade for the league. Even though many people may overlook the time period since it was so long ago, the 50s still had some very talented players taking the court. Below, the top ten players from the 1950s are ranked from one to ten.

Disclaimer: Note that the ‘50s decade was considered from the 1949-50 season to the 1958-59 season, and any statistics and awards noted below only encompass those seasons.

Who are the best NBA basketball players from the ‘50s?

While there were plenty of talented players during the 1950s, Bob Cousy’s combination of team success and individual success makes him stand out. Cousy’s first season was the 1950-51 season playing for the Boston Celtics, with whom he played the rest of the decade. During that time, Cousy was in nine All-Star games, voted on to eight All-NBA teams, and was awarded the 1957 regular season MVP award.

Cousy led the league in assists an amazing seven times out of the nine seasons he played. With this fact, it should not come as no surprise that Cousy led the NBA in assists for the 50s (4,544 total), and he also finished second in total points scored, with 11,944. While other players may have impressive statistics, Cousy has both multiple NBA championships and longevity to go along with his numbers. Cousy helped to lead the Celtics to two championships in 1957 and 1959. In 1971, Cousy was inducted into the Basketball Hall of Fame.

The number two ranked player on this list, Dolph Schayes, definitely has a case for number one. Schayes played the entire decade for the Syracuse Nationals (now the Philadelphia 76ers). Schayes made nine All-Star games, ten All-NBA teams, and led the NBA in rebounding for the 1950-51 season. Even though he only led the league in total rebounding once for an individual season and never in total scoring, Schayes was remarkably consistent, and he led the NBA in both of those categories for the decade. Schayes managed to score 13,298 points and grab 8,413 rebounds in the ten 50s seasons he played. Schayes managed to find his teammates on quite a few occasions, finishing seventh in assists with 2,177.

His teams also had some team success, leading the Syracuse Nationals to the NBA title at the conclusion of the 1954-55 season. This would be the only title the Syracuse Nationals would win before they moved to Philadelphia and became the 76ers, starting in 1962. Overall, just about the only aspect of their decade separating Schayes from Cousy is the two championships Cousy has to Schayes’ one. Nonetheless, Schayes was inducted into the Basketball Hall of Fame in 1973.

The only reason George Mikan is not the number one player on this list is that he only played six of the ten seasons in the decade. That being said, it speaks to his accomplishments that he is still the number three ranked player. Mikan played for the Minneapolis (now Los Angeles) Lakers from the start of the decade until he initially retired following the 1953-54 season. After sitting out a year, he came back and played one more season for the Lakers in 1955-56 before retiring for good. In that short time frame, Mikan was in four All-Star games, made five All-NBA teams, and led the NBA in scoring in the first two seasons. Mikan also led the league in rebounding for the 1952-53 season.

Despite only playing in six seasons, Mikan still managed to finish in the top twenty in both points scored and rebounding for the decade. Perhaps most impressively, Mikan led the Lakers to four titles in those six seasons he played in 1950, 1952, 1953, and 1954. While there was no NBA Finals MVP award at the time, Mikan most likely would have won a few had the award existed. In 1959, Mikan’s amazing career led to his induction into the Basketball Hall of Fame.

Similar to Mikan, Bob Petit would be higher on the list had he played more seasons in the decade. Nonetheless, he still comes in at number four. Petit played his first NBA season for the Milwaukee Hawks in the 1954-55 season before moving with the team to St. Louis the next season, where he played the rest of the decade and his career. Thus, Petit only played five seasons in the NBA during the 50s. During that time, he made both the All-Star game and an All-NBA team every season. He also led the league in scoring twice, rebounding once, and won the MVP in both 1956 and 1959.

For the 50s, despite only playing five seasons, Petit finished ninth in total points scored with 8,894 and sixth in total rebounds with 5,593. Lastly, Pettit helped the Hawks to the NBA championship in 1958. To date, this is the only championship in franchise history for the Hawks, who currently play their games in Atlanta. Pettit would eventually join the Basketball Hall of Fame class of 1971.

One of the NBA’s first pure scorers, Paul Arizin, is the number five ranked player on this list. Paul played his first NBA season for the Philadelphia Warriors (later the San Francisco and Golden State Warriors) in 1950-51. After playing two seasons, he left the NBA to join the military and serve in the Korean War for two years before coming back to the Warriors in 1954. Arizin then played the rest of the decade for the Warriors.

During his eight seasons, Arizin made seven All-Star teams, was voted on to four All-NBA teams, and led the league in scoring two times. For the entirety of the 50s, Arizin finished fourth in total points, with 11,122, and fifteenth in rebounds, with 4,300. In 1956, Arizin helped to lead the Warriors to their second NBA title and final one in Philadelphia before they moved to San Francisco in 1962. Arizin was voted into the Basketball Hall of Fame in 1978.

A teammate of Paul Arizin, Neil Johnston, checks in as the number six ranked player on this list. Johnston played his entire career for the Philadelphia Warriors from 1951-1959. In his eight years in the NBA, Johnston was a member of five All-NBA teams, played in six All-Star games, and led the NBA in points per game in three straight seasons from 1952-1955. In the final season of that amazing stretch, 1954-55, Johnston also was able to lead the league in rebounding.

For the 50s, Johnston ended up seventh in total points (10,023) and fifth in total rebounds (5,856). Johnston also managed to finish in the top twenty-five in total assists, with 1,269. As a teammate of Arizin’s, Johnston helped the Warriors to the 1956 NBA championship. Years after his retirement, Johnston’s great career was finally recognized, and he was inducted into the Basketball Hall of Fame in 1990.

Arguably Bob Pettit’s best teammate, Ed Macauley, is the number seven ranked player on this list. Ed played the first season of the decade and his career with the St. Louis Bombers (a team that is now defunct) before playing with Bob Cousy and the Boston Celtics (1950-1956) and eventually joining Pettit and the St. Louis Hawks for the final three seasons of the decade (1956-1959). In those ten NBA seasons, Macaulay made four All-NBA teams, participated in seven All-Star games, and helped lead the Hawks to the 1958 NBA championship alongside Pettit.

Macaulay was an all-around type of player, and for the 50s, he finished third in total points scored with 11,234, thirteenth in total rebounds, grabbing 4,325 of them, and eighth in total assists, dishing out 2,079 of them. Once his career was over, Macaulay was inducted into the Basketball Hall of Fame the following year in 1960.

The number eight ranked player on the list is Bill Sharman, best known for his days with the Boston Celtics. Sharman played the first season of his career with the Washington Capitals in the 1950-51 season before joining Bob Cousy and the Celtics and finishing the decade with them. In the 50s, Sharman made seven All-Star teams as well as six All-NBA teams. As for his numbers, Sharman finished thirteenth in total assists, with 1,811 of them, and was also fifth in points scored, with 10,319.

At the end of the decade, with Cousy and some other incredible teammates alongside him, Sharman helped the Celtics to the 1957 and 1959 NBA championships. At the end of his playing career, Sharman was inducted into the Basketball Hall of Fame in 1976. Sharman also had a successful coaching career once his playing days were over, and he joined the Hall of Fame a second time as a coach in 2004.

Another eventual teammate of Bob Pettit, Larry Foust, joined the team after they won the championship in 1958 and never managed to win one in his career. Despite that fact, he still comes in as the number nine ranked player on this list. Foust first played for the Fort Wayne (now Detroit) Pistons from 1950-1957 before playing the final two seasons of the 50s with the Minneapolis Lakers. Foust would go on to join Pettit and the Hawks in the early 60s. In the 50s, Foust led the league in rebounding once (1951-52), was in eight All-Star games, and made an All-NBA team in 1952 and 1955. As for his total numbers, he was second in the NBA in total rebounding behind Schayes, with 6,703, and also managed to finish eighth in points scored, with 9,216. Unfortunately for Foust, he never made it into the Basketball Hall of Fame, but he still had an outstanding career and deserves recognition.

A very similar player to Foust, the last member of this list is Harry Gallatin. Gallatin was on the New York Knicks when the decade started and played for them until 1957, after which he played the final season of his career with the Detroit Pistons. During his career, Gallatin made seven All-Star games, two All-NBA teams, and also led the league in rebounding in 1954. Gallatin finished the 50s third in total rebounds, with 6,684, and his 8,409 points scored was good enough for eleventh. Both of those were slightly behind Foust’s aforementioned rankings (second and eighth, respectively). Despite this slight separation, Gallatin does have something Foust does not; he was inducted into the Basketball Hall of Fame in 1991.

Who is the best NBA basketball player from the 50s?

When statistics, accolades, and longevity for the decade are all taken into account, Bob Cousy is the best NBA player from the 50s. Cousy won the 1957 NBA Most Valuable Player award, was a nine-time All-Star, selected to ten All-NBA teams, and won two NBA Championships (1957, 1959) during the 1950s. A player like George Mikan may have won more championships, and a player like Dolph Schayes may have had slightly more impressive overall numbers, but Cousy’s combination of winning, metrics, and longevity puts him ever so slightly on top.

Who scored the most points in the 50s?

Who is the oldest NBA player from the 50s that is still alive?

The oldest player from the 50s that is still alive is John Barber. Barber was born on June 27th, 1927, meaning he is 95 years old as of 2022. Barber did not see much action in the NBA, as he only played in five games in his career, all in the 1956-57 season. In those five games, Barber scored a total of seven points and played only 14 minutes between the five games. Nonetheless, he is the oldest man alive who played in an NBA game.