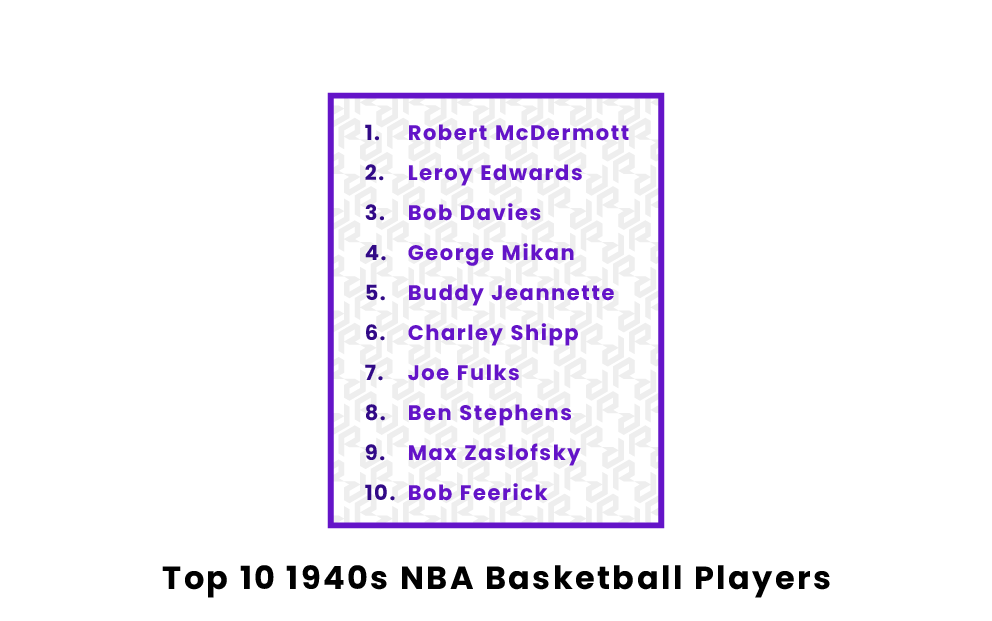 The 1940s were an interesting time in professional basketball. At the start of the decade, the major pro league for basketball players was the National Basketball League or NBL. However, in 1946 a new league was created, called the Basketball Association of America (BAA). These two organizations fought for popularity for a few years before finally agreeing to merge in 1949, becoming the National Basketball Association, or NBA, and ushering in a new age of the sport in America. Keep reading below to learn more about the top players from the NBL and the BAA in the 1940s.

Who are the best basketball players of the 40s?

When it comes to accomplishments in 1940s basketball, no one has done more than Robert McDermott. He scored the most points of any player in the decade with 3,583, and he was routinely recognized as one of the best players on the court. He made the All-NBL First Team in the 1941-42 season and went on to be named to the First Team in each of the next five seasons in a row. In 1948, he was placed on the All-NBL Second Team, giving him the second-most All-NBL selections of all time. During that span, McDermott dominated, winning four-straight MVP awards from 1943-1946. No other player has equaled that feat in the NBL, and in fact, no one in NBA history has done so either (there have been a number of three-peat MVPs). Though there were no records of assists or rebounds in the NBL, we do know McDermott could score, as he averaged 15.3 points per game during his tremendous MVP run and 12.5 points per game for his career. He finished with the fourth-most games played in NBL history at 287 and was also the league’s all-time leader in made field goals.

Leroy Edwards, the Oshkosh All-Stars center, was a total beast on the floor during his career. He was selected to eight All-NBL teams, the most of any player in the league’s history. He was also a three-time NBL MVP, doing so in consecutive years from 1938-1940. In the 1944-45 season, Edwards averaged 13.6 points per game. Though it may not seem like a lot by today’s standards, such point levels were massive back then. The league as a whole only averaged 50 points per game, and so Edward’s scoring output would be equivalent to roughly 30 points a night in today’s NBA. Overall, he scored 3,221 points in the NBL, the second-most all-time behind only McDermott.

Bob Davies is one of the many players on this list who came into professional basketball at an interesting time. He debuted in the NBL in the 1945-46 season and quickly rose to prominence in the league, being named to the All-NBL First Team in 1947 and again in 1948. During his time in the small-town league, Davies also captured an MVP award in 1947 after averaging 14.4 points per game. In 1948 he moved to the BAA, where he found immediate success, leading the league in assists with 5.4 per game and also making the All-BAA First team. The next year the NBA was founded, and Davies didn’t slow down a bit. He made three-straight All-NBA First Teams from 1950-52 and was a Second Team member in 1953. He also made four All-Star teams in the NBA and was inducted into the Hall of Fame in 1970.

It’s tough to rank Georg Mikan on a list of 1940s basketball players because although he didn’t play much in the decade, he was unquestionably the most talented player of his generation. Mikan made his professional basketball debut in 1946 for the Chicago American Gears of the NBL, and he quickly put the league on notice. Mikan averaged 16.5 points per game and was named to the All-NBL First Team, an honor he would repeat the following year in addition to winning the NBL MVP award. In 1948, Mikan moved to the BAA, and his dominance was clear from day one. He led the league in scoring in his first season, dropping over 28 points per night and being named to the All-BAA First Team. The next year, the NBA was formed, and Mikan didn’t skip a beat. He led the new league in scoring in each of its first two seasons, and he was a member of the All-NBA First Team for five straight years from 1950-54. Mikan was the league’s first great big man and was inducted into the Basketball Hall of Fame in 1959.

Buddy Jeannette was another player who began his career in the NBL and moved to the BAA once it was formed. In the NBL, Jeannette was outstanding, being named to four All-NBL First Teams and one All-NBL Second Team from 1941-1946. He was the league’s sixth-leading scorer in the 1940-41 season and the fifth-best scorer during the 1943-44 year. In 1947 he transitioned to the BAA, and his first full season in the league was very successful. He was named to the All-BAA Second Team after leading the league in field goal percentage, being fifth in made free throws, and finishing fifth in total win shares. That same season, Jeannette helped lead the Baltimore Bullets to the BAA championship, and in 1994 the guard was inducted into the Basketball Hall of Fame.

When it comes to the NBL, Charley Shipp was one of the league’s most notable players. He consistently performed at a high level, and he was one of the most decorated players in league history. From 1938-1944, Shipp made an All-NBL Team every season, garnering five spots on the First Team and two selections on the Second Team. He played in every season of the NBL’s existence and was remarkably healthy, finishing as the all-time leader in games played in the league with 376. Shipp was also a good scorer, as he is the NBL’s 11th all-time leading scorer with 1,935 points. Shipp did make it to the NBA in 1949 and appeared in 23 games for the Waterloo Hawks, putting up five points and two assists per game.

Like Mikan, Joe Fulks was another man who found success in both the BAA and the NBA. Fulks began his career in 1946, and it was apparent that he had the skills to be one of the best. He put up 23.2 points per game in the 1946-47 season, good enough to lead the league, and he came back the following year to lead the league in scoring again. Fulks made the All-BAA First Team in each of his three seasons in the league, and in 1949 he transitioned to the NBA. There, Fulks remained one of the better players in the sport, making a pair of All-Star appearances in 1951 and 1952, as well as being selected to the All-NBA First Team in 1951. Fulks also won a BAA championship with the Philadelphia Warriors in 1947 and was inducted into the Basketball Hall of Fame in 1978.

Ben Stephens’ career was the definition of short but sweet. The guard debuted in 1939 in the NBL and was immediately impactful. He averaged 10.5 points per game, the second-highest mark in the league, and was named the NBL Rookie of the Year. The following season, Stephens upped his scoring average to 11 points per game, good enough to lead the NBL and win the Most Valuable Player award. The 1941-42 season would be the last for Stephens, as he was the seventh-best scorer in the league and helped take his team to the playoffs, where he averaged 13 points per game but was unable to win a championship. He was named to the All-NBL First Team in each of his three years as a player, and he also led the league in games played in all three of his seasons. Stephens was also adept at getting to the line, finishing in the top 10 in free throws from 1940-1942.

When Max Zaslofsky came into the BAA in 1946, he was instantly one of the league’s best scorers. The shooting guard from Brooklyn was the definition of a bucket on the court, averaging over 18 points per game for his three years in the BAA. He was selected to the All-BAA First Team in all three of those years as well, and he was the league’s scoring leader for the 1947-48 season. In 1949, Zaslofksy, like many other players, opted to move to the NBA, where he continued to put the ball in the hoop at a high level. He averaged 16.4 points in his first season and was named to the All-NBA First Team. The following year, Zaslofksy made an All-Star team, and he led the NBA in games played.

The final member of this list, Bob Feerick, was just a little too early for the NBA. Still, he was exceptional in his time in the BAA and was one of the best players in the league during his career. Feerick debuted in 1946, the first year of the BAA’s existence, and promptly became one of the most respected players in the league. He averaged nearly 17 points per game in his first season and led the league in field goal percentage, earning him a spot on the All-BAA First Team. For the next two years, Feerick continued to score, averaging 14.5 points and leading the BAA in free throw percentage both years. He was once again a member of the All-BAA First Team in 1948 and made the Second Team in 1949. For both the 1946-47 and 1947-48 seasons, Feerick was the BAA’s leader in win shares, and if the league had given out MVPs, he surely would have won at least one. He did play one season in the NBA, where he averaged eight points and two assists, but he retired following the 1949-1950 season.

Who is the best basketball 40s player of all time?

The best basketball player of the 1940s was Robert McDermott. A quick glance at McDermott’s resume shows why he was the top player of the decade; his seven all-league selections and four MVPs are both tremendous accomplishments, especially when considering that they were all achieved within consecutive years. McDermott also scored the most points in NBL history with 3,583.

Who scored the most points in the 40s?

Robert McDermott scored the most points in the 1940s with 3,583. McDermott’s four NBL MVPs are the most in league history, and he also played the fourth-most games of any NBL player. For his career, McDermott averaged 12.5 points per game, and he scored 13 or more points per game in each of his first five seasons in the NBL.

Who is the last NBA player from the 40s?

The last player remaining from the 1940s to play in the NBA was Dolph Schayes. Schayes, who debuted in 1948, was one of the NBA’s first stars, and he lasted 16 seasons before retiring in 1964. Schayes was a 12-time All-Star and 12-time All-NBA selection, and he was inducted into the Basketball Hall of Fame in 1973.