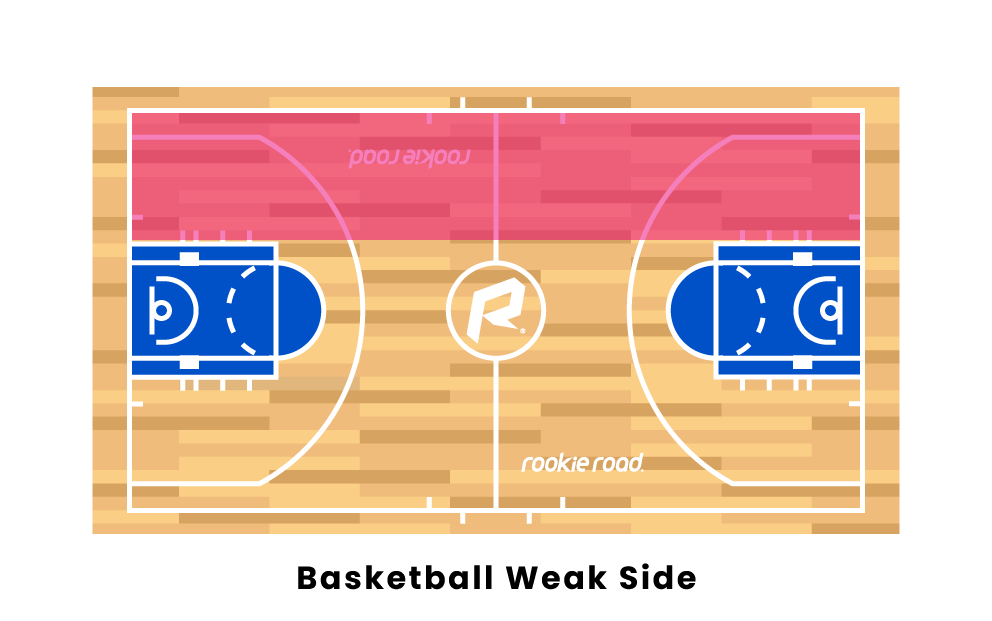 The’ weak side’ in basketball refers to the side of the court opposite of wherever the ball is located at any given time. It is utilized in offensive play calls and strategies.

Attacking the Weak Side

Teams that consistently perform well on offense are constantly aware of the weak side of the basketball court. Since the majority of the offense’s five players are standing on the strong side (3-4 out of 5 players) where the ball is located, the defense must adjust accordingly and shade towards the side containing the largest number of offensive players. As a result, players standing on the weak half are usually left open, allowing them to cut towards the basket for an easy layup or receive a pass from behind the three-point line for a wide open shot attempt.

Defending the Weak Side

The most effective way to defend the opposing offense when a clear strong and wide side of the court has been established is to ‘trap’ the ball handler. This involves shading the inside hip of the dribbler, thus preventing the player from attacking the middle of the court and forcing them to move towards the corner of the court. Once offensive players realize they are pinned in the corner and dangerously close to stepping out of bounds, they are likely to panic and make errant cross-court passes that can be easily intercepted by a nearby defender.

Assigning a Strong & Weak Side

Contrary to popular belief, the strong and weak sides of the court do not remain constant. Instead, they tend to change with each offensive possession. For example, if the ball is located towards the bottom portion of the court for a majority of the possession and is suddenly passed to a player standing at the top of the court, the strong side effectively shifts ends from the bottom half to the top half. The basketball, not the offensive team itself, is the true indicator of the strong/weak side, which changes to accommodate the location of the ball as it moves from player to player.

Ball Reversal: The ball is passed from one half of the court to the other, flip-flopping the strong and weak sides (i.e. bottom left corner to top right corner)

Back Cut: A player standing on the weak side of the court makes a quick move towards the basket and receives a pass from a teammate positioned on the strong side

Zone Defense: Each defender is assigned a portion of the court to cover rather than an individual member of the opposition, preventing the defense from overloading one side of the court and leaving the other half unguarded

Pages Related to Weak Side Basketball