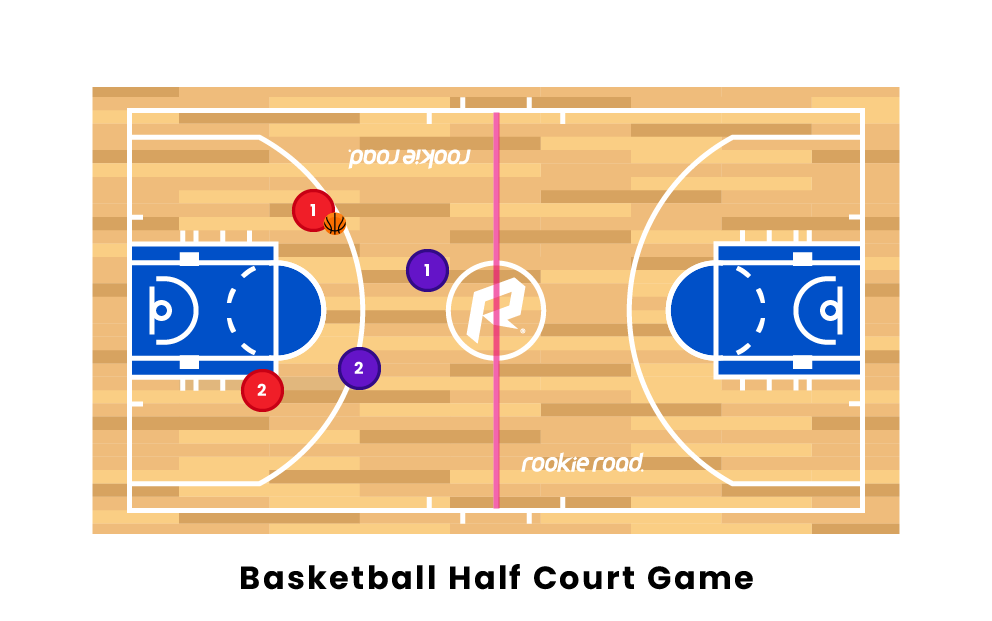 Half-court games of basketball are perfect for developing your skills when you have less than ten players. During full-court games, opposing teams are shooting in different baskets, but in half-court games opposing teams share the same basket. Unlike in a full-court game in a half-court game, there is no jump ball. Depending on what teams are playing the game, there are several ways to decide who gets first possession. Typically possession is decided on a coin toss, or the first player to complete a foul shot or another way decided by the teams.

The games are played in a half-court setting with each team is shooting on the same basket. The court is 49’ wide and 36’ long. The court has the exact same markings as a traditional basketball game. During FIBA (International Basketball Association) competitions, a size 6 ball is used.

Typically half-court games are played with 4 players on each team. There are professional half-court leagues, but half-court games can be played as an unofficial pickup game. The two official half-court leagues are FIBA 3x3 and The Big 3.The game is played with three players on the court during the game with one sub.Once initial possession is decided, they have a limited time to shoot the ball. Depending on the league the shot clock can be 12-14 seconds long. Depending on the league or if it’s a pickup game the length and gameplay can vary.

Since opposing teams are shooting on the same basket once the team rebounds the ball they must clear it. When the defending teams get possession of the ball, they must bring it outside the 3 point arc.

FIBA is played for 10 minutes or what team gets to 21 first. In the big 3, the game does not have a time limit, the winner is the first team to make it to 50.

A foul is anytime a player breaks a rule in the game that is defined in the rulebook for that league. After a foul is called the other team will get free throws.

A violation is similar to a foul. Instead of resulting in free throws, it results in a change of possession.