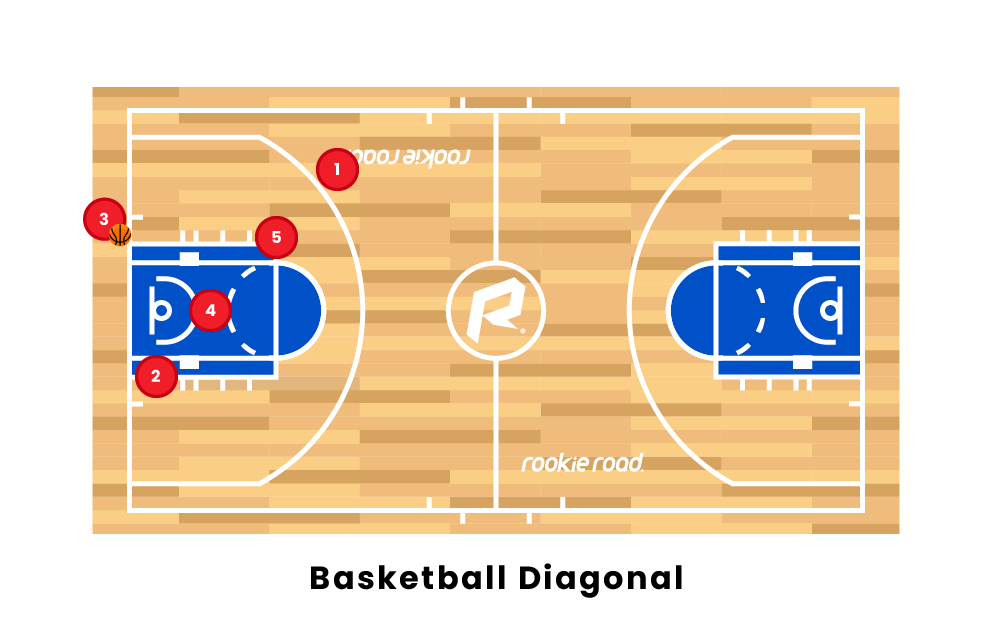 A ‘diagonal’ in basketball is an imaginary line that extends from one corner of the post (box-shaped painted area near each basket) to the other. While the diagonal lines are not physically painted onto the court, they are used to a mental reference point for performing certain offensive plays and passes.

As mentioned above, diagonal lines are located in the post on each side of the court. Since the post forms a rectangular shape, there are four corners that represent where the diagonal lines begin and end. One line extends at a 45-degree angle from the bottom right corner to the top left corner, while the other starts in the bottom left corner and stops at the top left.

Full-court diagonals also exist, with the same principles that are listed above governing where the lines are located relative to the entire court.

Taking diagonals into consideration makes it easier for both coaches and players alike to attack the opposing defense. Diagonal lines mainly help with positioning within the painted area. For example, when trying to inbound the ball, the offense may run a play in which two players begin on opposite diagonals (i.e. one player in the top left corner, the other player in the bottom right corner of the post). Proper alignment not only gives the offense flexibility by allowing them to perform a series of cuts from the original starting point, it also establishes more ground for the defense to cover.

Diagonals can also give offensive players a good indication of when to pass the ball. While a player currently holding the ball above one of the diagonal lines is close enough to the basket to attempt a decent shot, higher percentage shots can be achieved by passing the ball to a teammate that is below the line and directly beside the basket.