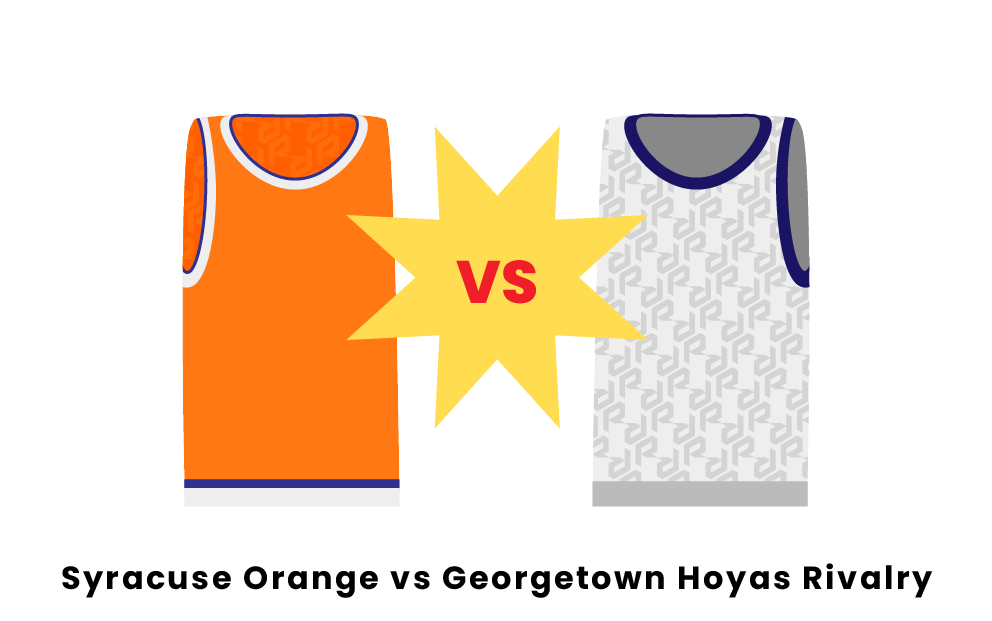 The Syracuse Orange and Georgetown Hoyas basketball rivalry is one of the most storied both on and off the hardwood, dating back to the original iteration of the Big East college basketball conference. This rivalry featured future NBA stars such as Allen Iverson, Carmelo Anthony, and Patrick Ewing, as well as legendary NCAA coaches John Thompson Jr. and Jim Boeheim.

This rivalry between the Syracuse Orange and the Georgetown Hoyas dates back to 1974. For the greater portion of their history, Syracuse has been headlined by Jim Boeheim, who has been the head coach of the Orange since 1976 and to this day is one of the most successful coaches college basketball has ever seen. On the Hoyas sideline stood John Thompson Jr. or "Big John," as the fans called him. Leading the team from 1972 until 1999, he brought the program to what it is today, and eventually, the coaching job was given to his son John Thompson III.

Sparked initially by a fan incident following a heated contest in 1974, the #2 ranked Orange blew a 15-point lead to allow the Hoyas to pull off a then-unprecedented upset. Following the game, bad blood began to brew, amplified only by the burgeoning success of the two programs under their then-new coaches Boeheim and Thompson Jr. The two coaches were also former players of their respective programs. Still, they faced each other on the court, leading the rivalry to a new personal level that the fans and players fed on. While no longer members of the same conference, the rivalry still stays alive to this day, and each time the teams take the court against each other, the magic and memories that fuel the rivalry come back to life.

Georgetown at #2 Syracuse on February 30th, 1980: This game saw the unranked Hoyas upset the Orange after a 30-16 halftime lead by Syracuse. This was the first season in the Big East for the Orange and the last game held at Manley Field House, where they had a 57-game winning streak before this contest.

#6 Syracuse at #11 Georgetown on January 31st, 1987: This contest took place when Syracuse was seemingly destined for the National Championship. The Hoyas, having a successful year, battled the Orange and won the game with flair, with the highlight of their victory being a game-winning overtime shot.

#1 Georgetown at #11 Syracuse on January 28th, 1985: Before this game, Georgetown was 18-1; conversely, Syracuse was only 12-3. This game saw Syracuse legend Pearl Washington help clinch another upset in the rivalry and sink a clutch jumper to win the contest 65-63 in favor of the Orange.

#19 Syracuse at #5 Georgetown on March 15th, 2013: During the 2013 Big East Tournament, the teams battled and saw future NBA player Otto Porter Jr. force overtime for the Hoyas before C.J. Fair and Brandon Triche ultimately led the Syracuse Orange to the win.

Jim Boeheim, Syracuse head coach from 1976-Present: Boeheim led the program to 1000+ wins over the years and, most notably, the 2003 NCAA National Championship.

John Thompson Jr, Georgetown head coach from 1972-1999: Thompson Jr. was the coach credited with building the success Georgetown saw and still sees to this day. Thompson Jr. and Boeheim were longtime rivals and well-respected competitors.

Patrick Ewing, Georgetown center from 1981-1985: Future NBA Superstar and legend for the New York Knicks, Ewing led the Hoyas to 3 national titles as a player and now coaches the team.

Allen Iverson, Georgetown Guard from 1994-1996: A future NBA superstar for the Philadelphia 76ers, Iverson started his career with the Hoyas, and despite not winning a national championship, he brought the team back to national recognition.

Why are Syracuse and Georgetown rivals?

Syracuse and Georgetown were natural rivals due to the two teams originally residing within the Big East NCAA Basketball division. They played quite often and typically had close games. With former players becoming coaches in Boeheim and Thompson Jr. and both teams causing heartbreak for one another with losses, this naturally led to a rivalry forming over time. The rivalry became a tradition carried by both fans and players, on and off the court.

When did the rivalry between Syracuse and Georgetown start?

The official date of the rivalry depends on who you ask, but the most commonly agreed-upon moment that sparked the feud between the teams was the 1980 game that saw the end of Manley Field House. The Hoyas beat the Orange in an upset; the quote "Manley Field House is officially closed. May it rest in peace." by then-coach Thompson Jr. was seen as the mark of the rivalry being official.

Are Syracuse and Georgetown still rivals after Syracuse moved to the ACC?

The rivalry remains today despite the Big East no longer featuring the same teams it once did, with Syracuse moving to the ACC. This has decreased the number of matchups between Georgetown and Syracuse but has not stopped the emotions associated with their rivalry. Even without the two meeting in the Big East Tournament, regular-season contests and NCAA Tournament games have helped maintain the fight between the two teams. Regardless of which team's fans you ask, they will undoubtedly still have the same passion towards rivalry as they did back in the Big East glory days.