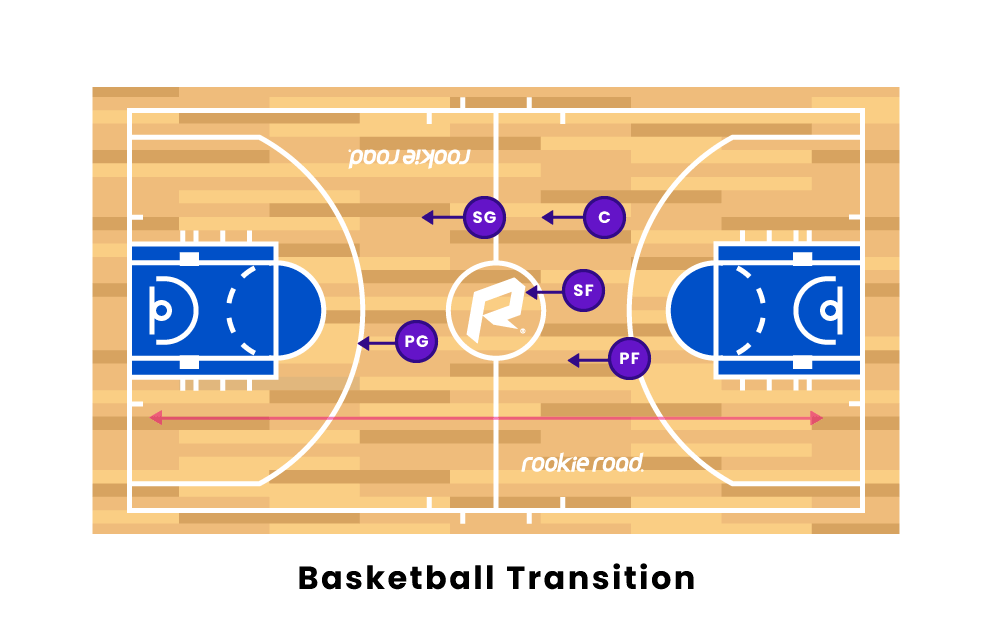 A transition in basketball is the act of a team changing from offense to defense or vice versa when possession of the ball changes.

Sometimes, the transition phase of a play is slow, and the offense only ends up attacking the basket after the defense has gotten back and is set up. This is almost a given after a dead ball turnover, but can occur on any change of possession.

In many scenarios, however, the offensive team is looking to get the ball up the court as quickly as possible if its players see they can gain an advantage from doing so. These situations are more likely after a steal, block or rebound, but can even occur after a made basket. Faster transition phases are more complex and take more explaining.

Good transition offense often occurs when all five players are making a break for the hoop. If there are more players who make it down the floor, the defense has to worry about more scoring threats.

Effective breaks after a shot usually start with immediate movement up the court, whether that means a quick pass to a ball handler after a rebound or made basket, or a rebound by a ball handler who turns up the court right away. Though there are different strategies on how to attack the basket in transition, many teams elect to keep the floor spread. That often means the ball handler will dribble, or preferably pass, up the floor while the other guards keep wide and run up the sidelines. In this situation, the two bigs can run up the middle of the floor as a rim runner and trailer. Again, this is just an example, as there is no set way that a transition up the floor must be run.

Playing With A Numbers Advantage

Sometimes, particularly after a steal or other live-ball turnover, the offense will outnumber the defense. In these situations, the offense should remain spread out so one defender cannot cover multiple offensive players.

If the transition offense does not lead to an immediate basket, the team can turn to a secondary break. Just how there is no set primary break that every team must follow, secondary breaks can vary and can be run in a freeform style. They often involve quick action before the defense is truly set in order to get a good, fast shot.

Playing transition defense well means being prepared on the offensive end of the floor, before the transition from offense to defense has even begun. Rather than send every player to the glass in order to recover a potential offensive rebound, many teams decide to have at least one player, almost always a guard, stay back around half court. This prevents a transition phase in which the team taking over possession of the ball catches the team that just shot completely out of position. Rather than simply providing an open lane to the basket, the shooting team will have at least one player back to slow the break and potentially stop an easy layup.

After a change of possession, the rest of the team needs to get back right away. In most situations, trying to stop the ball in the backcourt as soon as the opponent gains possession is usually a bad idea. It often results in a foul or the defender getting beat. Rather, the defenders should sprint back to the other side of the court. Normally, this means getting to the paint immediately. However, the defense needs to be aware of the other team's three-point shooting ability and adjust to contest shots accordingly.

Defenders should also always know where the ball is. It is important for defensive players, as discussed before, to sprint back. It is also important, however, for those players to see the ball at all times in order to prevent easy shots. This is because, once the basket is protected, defenders need to play the ball, which sometimes means leaving an assigned man to stop the ball from being scored. Defensive players need to be aware of more than just their assigned players so they can help teammates who are out of position or who have not made it back on defense yet.

If one player is back defending against two or more offensive players, he should, again, stick with the lowest offensive player. It is a good idea to jab step at the ball handler to make him hesitate, but overcommitting will almost certainly lead to a pass and a layup.

When two defenders are back playing against three or more offensive players, they should form a tandem. One player is positioned at the top of the key and the other just in front of the basket. The top player's job is to stop the ball handler from dribbling directly at the basket. If the top defender does his job and the ball handler passes the ball, the bottom defender runs to defend the offensive player who just received the ball while the top player retreats to cover the basket. This cycle is repeated until the offense shoots the ball or the rest of the defense gets back.

Of course, other scenarios do happen. As the third and fourth players make their way back, the team can shift into a triangle and then a square if necessary before reverting to the planned, five-person defense. Anytime there are fewer defenders during a play on transition teammates need to help each other to prevent easy baskets at the rim. Through all of this, players need to talk to each other in order to effectively cover each player on the offensive team.