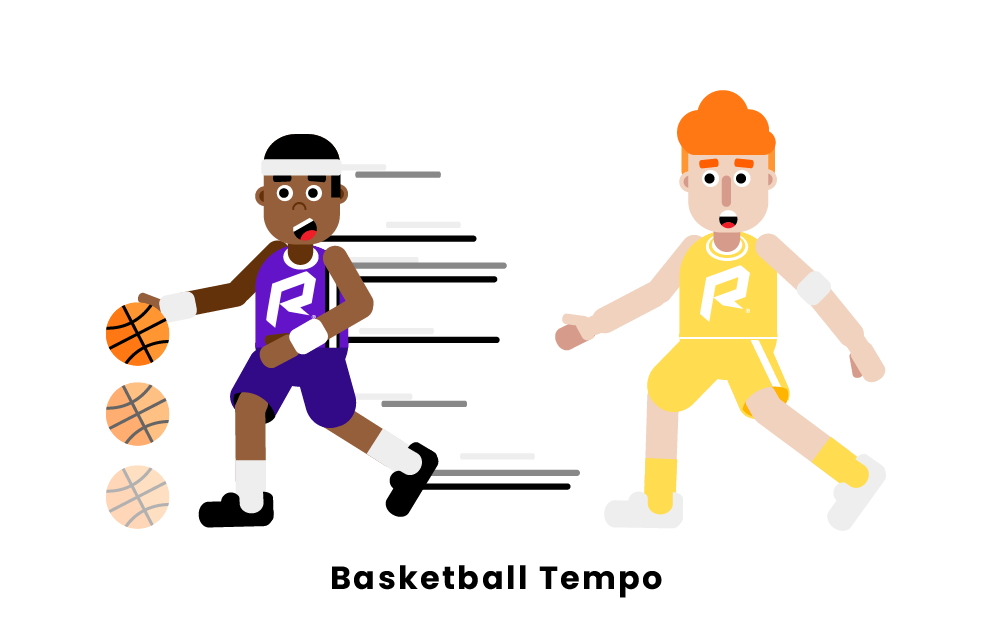 The term 'tempo' in basketball refers to quickly the offense seeks to advance the ball and attempt a shot. Some teams prefer to maintain a high tempo by sprinting down the court as soon as they gain possession of the ball, while others like to operate a slower pace and execute plays that take a fairly significant amount of time to develop.

Fast-paced offensive approaches, otherwise known as playing 'up-tempo,' are exciting to watch from a fan's perspective. Teams that favor up-tempo possessions will often try to initiate fast break, in which the player that grabs a rebound quickly passes the ball to a teammate that has hustled over to the opposing team's side of the court. This strategy generally results in easy, wide-open shot attempts (i.e. layups), since the ball is advanced towards the basket before the defense can run back and get in proper position to guard the shooter.

Slower-paced offensive approaches are less gripping to the average observer, however viewers that enjoy the tactical aspect of basketball generally prefer this game speed. Teams that attack the opposing defense with a slow tempo approach utilize a series of cuts and off-ball movements to gain separation and confuse the defense, ideally resulting in an open shot attempt for an unguarded player.

Deciding Which Approach to Use

Whether a team chooses to pursue a fast or slow offensive tempo depends mainly on two factors. The first is roster composition. Teams with plenty of speedy, athletic players at their disposal are better off using a blistering pace to beat the defense, while teams with a height advantage and several capable long-range shooters perform better when they make several passes prior to a shot attempt.

The other deciding factor in terms of tempo is the opposition's limitations on defense. Some teams play aggressive defense, swarming the ball handler for the entirety of the possession. Others are more conservative when playing defense, giving shooters space to operate and forcing the offense to make long shots. Over-eager defenders are susceptible to a slower pace, with the ball changing hands several times until a member of the defense "falls asleep" and fails to guard their assignment for a brief moment. Conversely, cautious defenders struggle to defend against an up-tempo approach, as they are often caught flat-footed when offensive players make quick moves towards the basket.