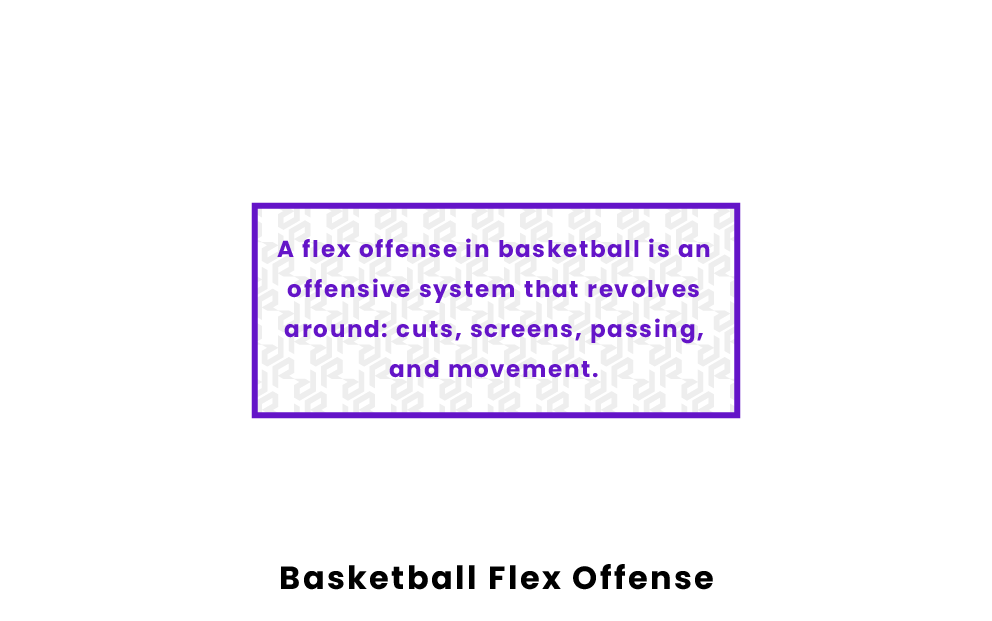 A flex offense in basketball is an offensive system that revolves around: cuts, screens, passing, and movement. The main goal of the flex offense is to get an easy shot due to the constant motion of the players. It is generally used against a man defense.

The flex offense is centered around a play called the flex cut. The cut is actually a back screen from a post player to the corner. At the same time, two players at the top of the key rotate the ball in order to create an easier entry pass to the cutting player. The fifth teammate is stationary in the other corner for this portion of the play. When optimized, the cutting player will have an easy layup since there are no defenders anywhere near the paint, since spacing is very important for a flex cut.

After the player on the top of the key who rotated the ball has made their pass, they then set a downscreen for the original back screener, allowing that player to come to the top of the key. They then curl around to the corner. Now, each position of the 4 out 1 in style is filled, and the flex cut can be run again on the opposite side of the court.

What makes the flex offense so versatile is the number of different adaptations that exist off of it. Most coaches will be able to recognize the flex cut as it develops, so it is necessary to have variations of the offense. This could be anything from having the cutting player fake down the baseline just to come back for an open three point shot, or have the player at the top of the key dribble penetrate since the defense is so focused on the flex. It is imperative that every player on the court knows each of the positions and is able to play them adequately since the offense involves so much movement.

In terms of slowing or stopping down the flex offense, the most important thing is communication. Making sure all players are on the same page regarding switching screens is vital to not giving up easy shots. Moreover, defenders could put pressure on the two players at the top of the key to deny the original rotational or entry passes.