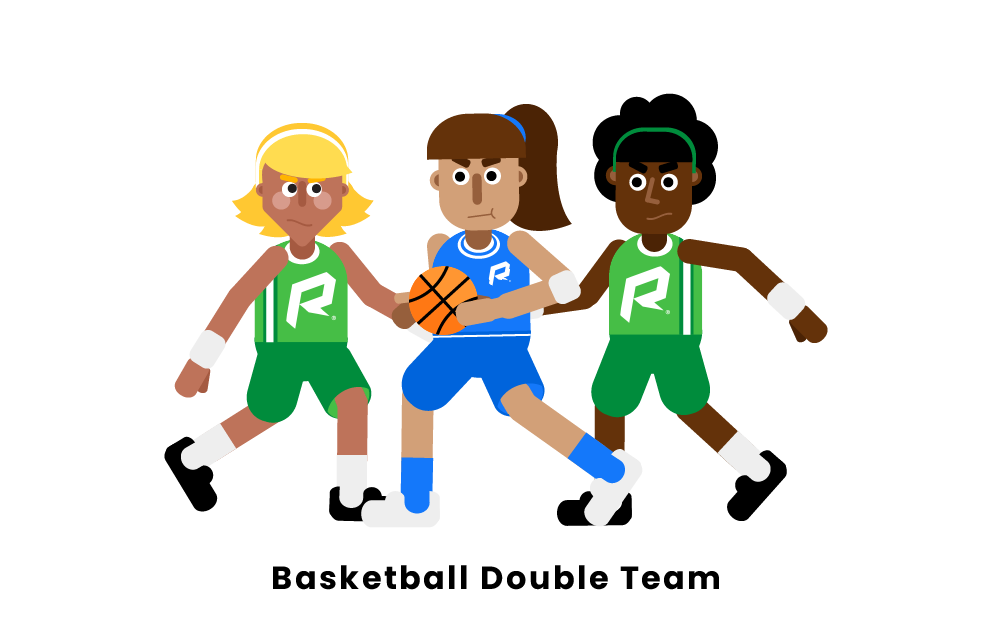 What is a Double Team in Basketball?

A ‘double team’ refers to two defensive players guarding a single opponent. Double teams can occur by design (pre-planned) or spontaneously during a game, with the ultimate goal being to severely limit an opposing player’s production.

Deciding When to Double Team

The decision to guard an opposing player with two defenders often happens in-game as certain situations arise. For example, if a player is dribbling towards the basket and looks to be headed for an easy shot, sending two players over to guard the ball handler will often force a pass to another offensive player. The other defensive players must be aware of when a double team is occurring so that they can adequately rotate on to the open players and not give up a bucket.

In addition, teams may elect to use the double team as a way to ‘trap’ a player that has the ball in the corner. When backed into the corner of the court and facing heavy pressure from two defenders, the player with possession of the ball tends to panic, making careless mistakes such as stepping out of bounds or throwing an errant pass as a result. These traps can be in the moment or predesigned plays that the coach has gone over if the offensive player is in a certain position.

Premeditated double teams can also be worked into a team’s game plan if the opposing team has a truly dominant player with a tendency to score tons of points each game. A smart coach will likely instruct his two best defenders to swarm that player at certain spots on the court. Double teaming the opposition’s best player gives the defense an edge as the game progresses, since the player is less likely to turn in a dominant performance when being harrassed constantly by two defenders, although completely ignoring the other players is irresponsible and help defense will be needed.

Double teams work best when one defender focuses on putting their hands up and altering the offensive player’s shot, while the other defender attempts to poke the ball loose. Often teams, a double team will cause offensive players to pick up their dribble. Once this happens, the ball is there for the taking, either by knocking it out of the opposition’s hands or stealing an ill-advised pass.

It is important to stand with your hands straight up and attempt to not contact the player as much as possible, since it is hard for referees to not call fouls when a player is in such a congested position.

The one true drawback of the double team in basketball is that it tends to leave an offensive player open. In order to have two defenders guarding a singular player, one of the defenders has to briefly leave the player they were assigned to guard. If the offense recognizes this in a timely fashion, the open player can either call for a pass and take an open shot, or cut towards the basket for an easy layup. While it is difficult to pass the ball accurately out of a double team, doing so all but guarantees a high-percentage shot (shot that is open or near the hoop) that will result in points being scored by the offense.