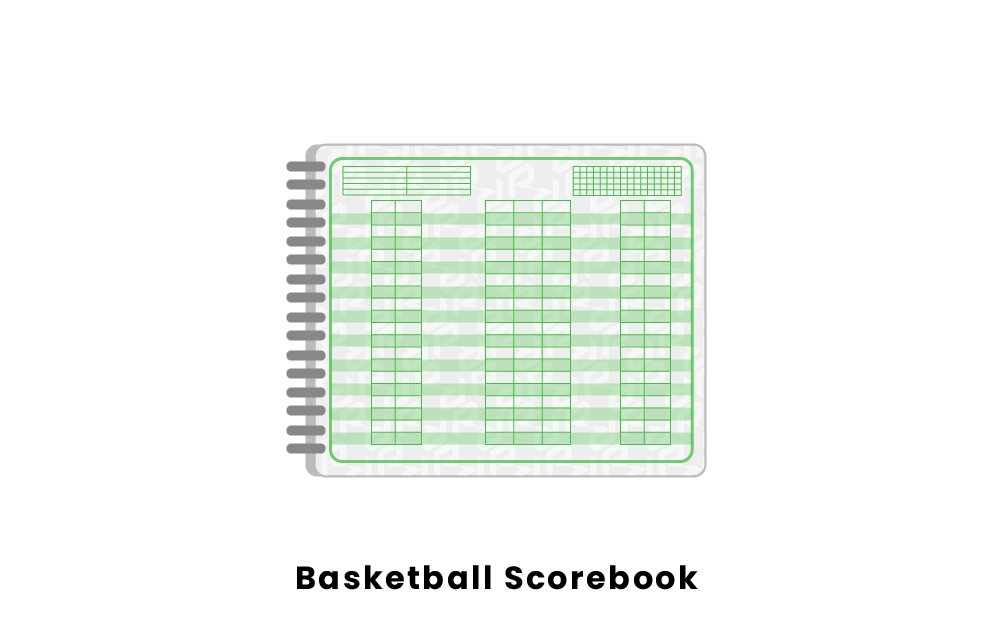 A scorebook in basketball is a book that includes all stats from the game. This is also referred to as the scoresheet. The scorekeeper has many things to keep track of throughout a game:

The scorekeeper sits next to the clock operator at the scorer’s table. These two must work together to make sure the information displayed on the scoreboard matches exactly what is recorded in the scorebook.

How to Keep a Scorebook

The main format of a scorebook is to have player names on the left and space for their statistics to the right of each name. The top of the scorebook will contain a long list of numbers used for tallying the running score. The scorekeeper crosses off each number as it is reached during the course of the game.

In order to begin keeping score, before the game begins, the scorekeeper must fill in the team’s information. This includes the name of the team, their coach, the date of the game, and their own name as scorekeeper. This information is located on the top left of each page. Next, the scorekeeper fills in the names of the players and their jersey numbers, which go in the long boxes below the scorekeeper’s name, under “Player” and “No.” To the left of each player’s name are boxes for their position and Quarters Played. In the Position box, the scorekeeper will write the letter of each player’s position (“C” for Center, “PG” for Point Guard, and so on). In the Quarters Played boxes, the scorekeeper will mark down each quarter a player participated in. This is also the place where players being substituted in during a quarter or leaving due to injury can be marked.

To the right of each player’s name and number, the scorekeeper has boxes to mark down personal and technical fouls. Every time a player commits a foul, the scorekeeper will mark one of the spaces, depending upon which type of foul it is. This helps keep track of when players commit enough fouls to be taken out of the game.

Next to the sections for player fouls are four boxes where the scorekeeper records the points each player scored per quarter. The scorekeeper notes each time a player scored a field goal or a three-pointer, and then tallies those scores into total points per player under the “Scoring Summary” section at the far right of the page. Some advanced scorebooks will also have areas to record player assists, rebounds, blocks, steals, and turnovers. Although, these stats are not typically kept at lower levels of play.

Finally, at the bottom of each page of the scorebook, there are sections for the scorekeeper to record timeouts, team fouls, and player technicals. Whenever a team calls a timeout, the scorekeeper marks it under the appropriate quarter. The team fouls section contains the numbers 1-10 for both the first and second halves of the game, with the scorekeeper marking each foul committed by a team and totaling them up to the right of the page. The final statistic on the page is the Percentage of Free Throws Made (FTM), which the scorekeeper denotes by dividing the number of successful free throws made by each team by their total number of free throws in the game.

Importance of the Scorebook

The scorebook is an integral part of a basketball game because it contains all the official information about the game. It keeps an official, unbiased record so that no teams can cheat or gain an advantage. The stats in the scorebook can also help settle disputes if a coach believes there is an error in the score.

The scorebook is necessary to keep the game running smoothly. For example, the scorekeeper must alert the officials when a player is fouled out so that they can remove the player from the court. Referees will communicate every player foul and made shot to the scorekeeper via hand signals to ensure the scorebook is kept accurately.

Scorebooks are very useful for tracking player statistics and tallying team statistics at the end of a game. These stats can help teams or players find areas of improvement or analyze their strengths.

What is a running score in basketball?

The running score is a live record of each team’s score in a basketball game. It is updated every time a basket is scored throughout the game. One point is added for a free throw, two points for a field goal within the three-point line, and three points for a field goal beyond the three-point line. The scorekeeper will check the box corresponding to the number of points scored, adding it to the previous score of the game. The running score is kept in the scorebook.

A basketball scorebook, much like scorebooks in other sports, is a sheet that has rows for players’ names and columns for statistics. Each player that is on the roster will be featured in the scoresheet. Their stats, such as points, assists, and rebounds, can be found in columns to the right of the player names. There are also rows at the bottom of the scoresheet that show the team totals for stats and fouls. Not all scorebooks will look exactly the same, but they will have the same basic layout.