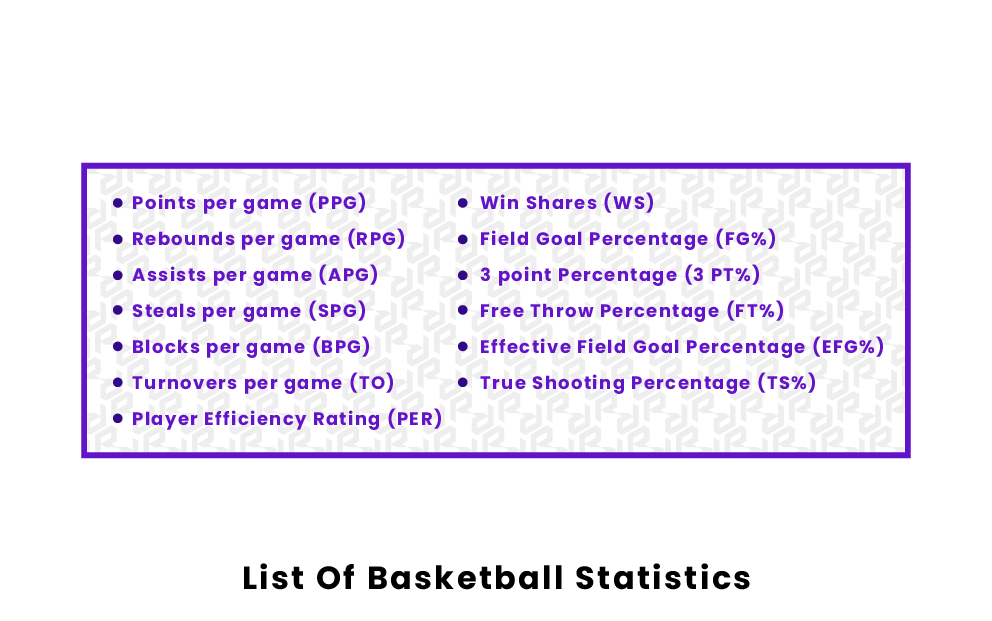 Statistics are the way that the performance of players and teams is quantified. Output has been tracked with box scores for as long as basketball has been played professionally. However, the recent surge of analytics in the sport has created more holistic statistics for each facet of the game. Data that is commonly tracked include points, rebounds, assists, turnovers, blocks, and steals, as well as player's shooting percentages by shot type. Team statistics focus on points scored and allowed per game, as well as adding up all the individual player performances. Stats are important because they show teams what aspect of the sport they are doing well in and what they need to do better. Stats are also important for players in terms of getting new contracts in free agency since they can point to their numbers as proof of their ability.

The amount of points a player contributed throughout the course of the game.

Every time a player grabs a missed shot it is recorded as a rebound. The box score also separates it into offensive and defensive rebounds.

A defensive rebound in basketball is when a shot is missed and the team that was playing defense gets the rebound. This is the most common outcome after a missed shot, although offensive rebounds are also a possibility.

An offensive rebound in basketball is the act of getting a rebound by an offensive player, after a shot attempt by one of their teammates. Offensive rebounds are recorded in the box score for each game and can be a large part of a team’s offense.

When the ball is passed to a teammate who then goes on to score a basket, within reasonable time, an assist is attributed to the passer. Assist tracking is somewhat relative and they can be scored differently depending on what the score keeper judges.

If a defensive player takes the ball away from an offensive player, intercepts a pass, or recovers a loose ball it is considered to be a steal.

If a defender legally makes contact with the ball after it is shot by an offensive player, altering the trajectory of the ball it is deemed a block.

A bad pass, lost ball, offensive foul, ball violation all result in a turnover and are marked down in the box score.

A player’s fouls they commit during the game are recorded and differentiated from offensive and defensive.

Field goal percentage is a statistic that describes a player or team's success rate when shooting field goals. Remember that a field goal is any basket made in basketball, except for a free throw. This includes shots from inside or outside of the 3-point line, so a field goal could be worth 2 points or 3 points.

Finally, the box score notes how many fans were at the game that was played. This is done for informational purposes.

The touches statistic in basketball refers to how many times a player holds or catches the ball within an offensive possession or an entire game. How many touches a player gets in a game can show how involved that player is in his or her team’s offense. In the 2018-19 season, Nikola Jokic led the league in touches, with a total of 7,479 for the season and an average of 93.5 per game.

Bench points are statistics measured in each game, counting the number of points scored by players that were not included in their team’s starting five. A team could have 0 bench points or over 50, depending on who is on the bench.

The term effective yield is another way of referring to a basketball player’s shooting percentage, more simply defined as the ratio between made shots and shot attempts. Effective yield is an important statistic to consider when evaluating player performances, as it provides an indication of how efficient a player is at shooting the basketball.

How are basketball stats calculated?

While the basic stats are calculated by simply watching the games and recording every instance of an event occurring, the more advanced statistics require models and equations that can be determined using the traditional stats. One example is win shares, a stat that attempts to quantify how many wins a player added to their given team based on their performance. Win shares are the sum of offensive and defensive production. For offense, points, the number of possessions, and a player's impact on each scoring opportunity are taken into consideration, while the defensive metric is based on how often athletes can stop their opponent from scoring in addition to their ability to force changes of possession. Win shares are one of many advanced metrics, alongside Player Efficiency Rating, Effective Field Goal Percentage, and True Shooting Percentage.

Who has the best statistics in the NBA?

Michael Jordan and Wilt Chamberlain have the highest points per game rate in NBA history at 30.12 and 30.07, respectively. Chamberlain and Bill Russell lead in rebounds per game at 22.89 and 22.45. Magic Johnson and John Stockton round out the traditional stats leaderboard with an average of 11.19 and 10.51 assists per game for their career. Using win shares as the most cohesive statistic that currently exists, the top five players in history are Kareem Abdul-Jabbar, Chamberlain, Karl Malone, LeBron James, and Jordan, all accumulating over 214 total win shares.

Do stats matter in basketball?

Statistics are very important in basketball. Front offices use performance stats to decide which players would be best to sign for their team's given strengths and weaknesses, and coaching staff use numbers to exploit their opponents. NBA players are constantly trying to improve their stats, not just so their team can win, but so they look better on paper for potential contracts or recognition like All-Star games or the Hall of Fame. Statistics matter at every level of the game, even if they do not seem to play a role in what actually occurs on the court.

Since there is no footage of many non-modern era basketball players, statistics are important for comparison and for quantifying their abilities and accomplishments. Even for the players who we do have the ability to watch a film on and examine their every play, data is a much more efficient and comprehensive way of determining which players are the best and worst in the NBA at any given time.

Who leads the NBA in 3-point percentage?

Steve Kerr is the all-time leader in 3-point field goal percentage at 45.4%. Steph Curry has the highest career mark of active players at 43.5%, slightly higher than his younger brother at 43.3%. The highest single-season mark was set by Kyle Korver in 2010 at 53.6 percent, while Joe Harris led the league last season at 47.4%.

The 3-point line was not introduced until 1979, meaning any players before that year had the ability to qualify for the percentage leaderboard. With modern playing style becoming more dependent on the three-pointer and focusing less on the physicality of the game, make percentages have seen a spike as well as total attempts across the league. Even big men are beginning to frequent the arc as it is considered efficient to take many three-point attempts during a game.