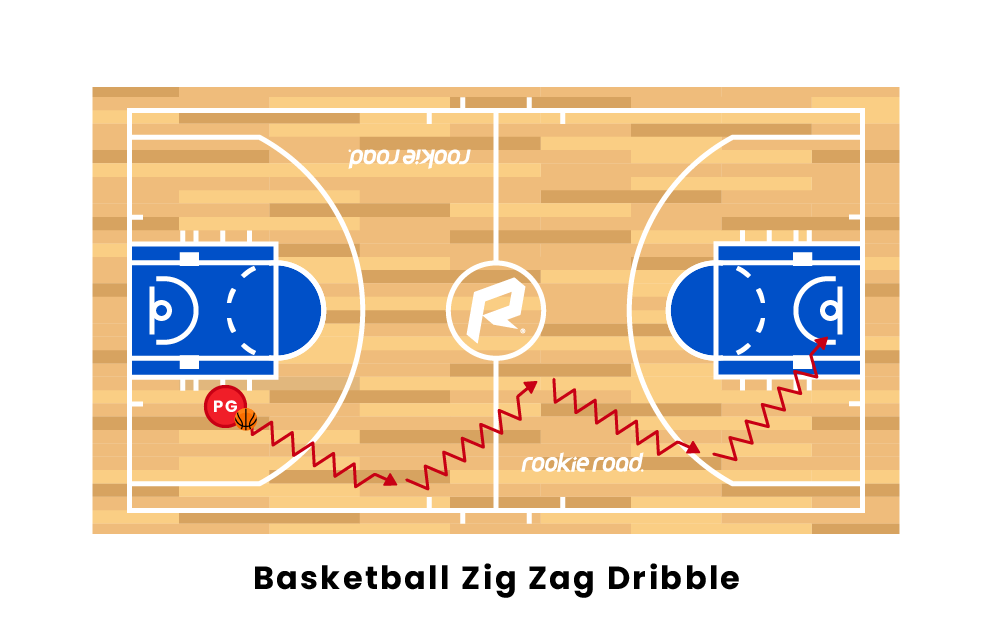 In basketball the goal is to score as many points as possible, the caveat is that there’s a defense doing everything they can to stop you. Offensive players sometimes have to get creative in order to get by those defenders. One tactic that is used is the zig zag dribble. A zig zag dribble in basketball is when a player dribbles from side to side, mirroring what a zig zag pattern looks like (see below).

Why do Players Zig Zag When They Dribble?

Zig Zagging is unpredictable and gives the offensive players a multitude of options and directions they can go with their dribble. Their weaving motion puts the defensive player on their heels and guessing as to where they will take the ball.

Zig zagging is also a useful way for players to work on their dribbling skills while in practice. The zig zag dribbling drill involves players dribbling diagonally from cone to cone. The exercise helps with ball handling and speed.

The zig zag dribble is most commonly seen used during a fastbreak. The reasoning behind that is there is more space for the offensive player (ball handler) to take advantage of.

There are several different ways that the ball handler can introduce a zig zag motion into their dribble.

First is the euro step. While it doesn’t involve dribbling the ball, players do make two harsh cuts back to back. The offensive player picks up their dribble and steps in one direction, once the defender bites another step is taken in the opposite direction. Finally, they launch off of that foot back in the direction they came from. All in all, they change direction three separate times.

The inside out dribble is probably the most common form of the zig zag you’ll seen in basketball. It allows a ball handler to go from side to side like a zig zag. If a player were dribbling with their right hand they would position their hand on the left side of the ball and bring it to the right, and vice versa for the left hand. What that does is give a misdirection to the defense and give the offensive player freedom to go in the direction they would like to.

A hop step is very similar to a euro step and is again going through the zig zagging motion, but without a dribble. Instead of the three direction changes the offensive player does just one. Once they pick up their dribble they move diagonally, jumping and landing on both feet.