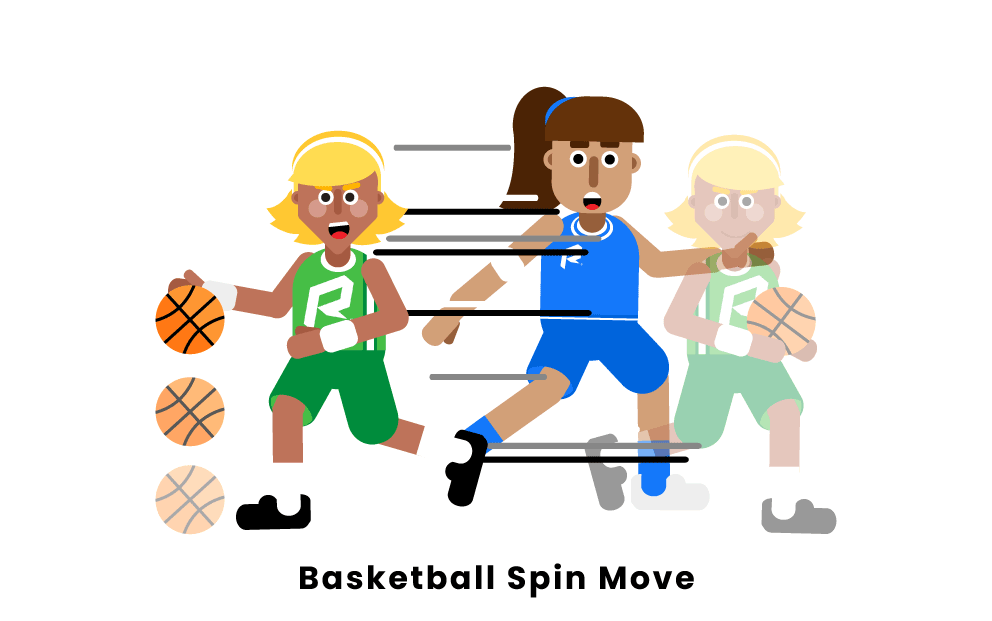 A spin move in basketball is a move used by an offensive player with the ball to get by the defense. It involves the ball handler getting to a defender and spinning his body 360 degrees while moving laterally to create space between himself and the defender.

How To Perform A Spin Move

Simultaneously, the ball handler takes a strong, but controlled, dribble. This allows the offensive player to keep his hand on top of the ball through the entire move while still being in control of it. A stronger dribble will give the ball handler more time with the ball in his hand.

The offensive player stops his forward progress, but leans forward, placing more weight on the ball of his left foot, making sure to stay balanced. He then pivots on his left foot and picks up his right foot, turning in a clockwise fashion so he is facing the opposite basket.

Now, the ball handler’s body weight shifts to the heel of his left foot as he continues to swing his right foot around. This foot should not stretch very far from the pivot foot. As the offensive player spins back so he is facing the defender again, he takes one more dribble with his right hand. This dribble, however, should be snatched back and end up in his left hand to make sure the ball is protected. Finally, the offensive player pushes off his right leg and blows by the defender.

One thing for players to avoid when performing a spin move is transferring the ball to their other hand immediately after taking that strong, controlled dribble discussed before. This makes it more difficult to get away from the defender and gives the defender an opportunity to steal the ball.

When To Use A Spin Move

A dribbler can use a spin move in a few different situations. The first is in the open court, when the defender is pressing, or at least playing far away from his team’s basket. A quick, explosive spin move against a defender in this position can put the ball handler ahead of the defensive player and set up a good possession for the offense.

Moreover, a spin move is good for layups or other shots close to the basket. This can mean beating the offensive player’s initial defender near the basket or against help defenders who are scrambling to help their teammate.

Setting up a spin move can help it to be more effective. Either stepping in the direction away from the intended spin move or crossing over, for example, can help to move the defender in the other direction. This will create more space between the ball handler and the defender.

Picking Up The Ball

On some plays the ball can be picked up after the dribble that starts the move off. Picking the ball up is effective if the ball handler is in heavy traffic and needs to protect the ball. As long as the player shoots the ball, or at least gets rid of it, by the time he takes two steps, this is not a traveling violation.