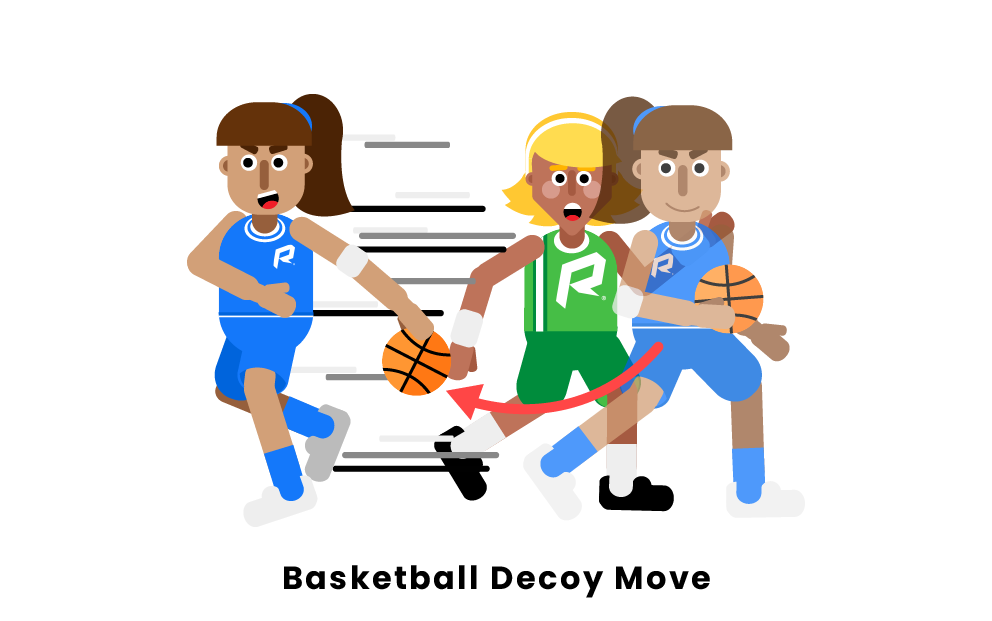 A ‘decoy move’ in basketball refers to a player (with or without the ball) performing a fake move in order to gain separation from the defense. Decoy moves tend to fall into one of three categories: dribble moves, cuts and ball fakes.

Dribble moves are performed by the player that currently possesses the ball. The ball handler can use a series of fancy moves to keep defenders off balance and create space to attack. While there are many techniques that can be used, the most common dribbling moves are outlined below

The ball handler quickly switches the ball from one hand to the other, making it easy to blow past over-eager defenders that are trying to steal the ball.

The ball is bounced between the ball handler’s legs, briefly stalling the defender and allowing the ball carrier to observe the defense and plot the next move accordingly.

Note: The ball carrier typically bounces the ball on the floor with one hand and catches it with the other hand.

A ‘behind the back’ dribble follows the same sequence as between the legs dribbling, with the one exception being that the ball is bounced behind the player’s feet rather than through their legs.

While dribbling towards a defender, the ball carrier lunges forward to create the illusion of a continued movement in that direction. This often freezes the defender, allowing the ball carrier to then accelerate past the opposition for an easy basket. 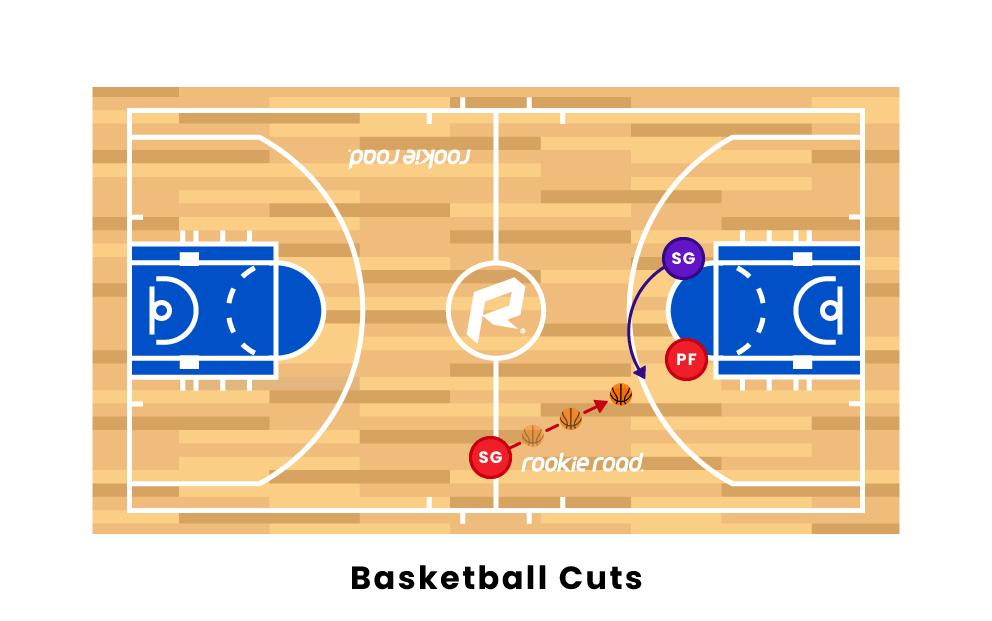 Arguably the most effective decoy move, a fake cut allows an offensive player to break free from the defender and find space for an open shot attempt. A ‘cut’ in basketball is when an offensive player that does not have the ball sprints towards a certain area of the court in order to gain separation from the defender. The most common fake cut involves the offensive player running full speed towards the middle of the court, then stopping abruptly and retreating to where they started behind the three-point line. Defenders (often left standing near the basket) must scramble to get back to their assigned player, giving offensive players a window in which they can catch a pass and take a relatively uncontested shot.

There are two types of ball fakes, the ‘shot fake’ and the ‘pass fake.’ When performing a shot fake, the player that has possession of the ball will lift the ball above their head to trick the defense into thinking a shot is about to be attempted. If convinced that the offensive player is shooting the ball, the defender will often try to contest the shot by jumping out at the player. Once the defender is airborne, the ball handler can put the ball back on the floor and dribble past the defender for a wide open look at the basket.

Pass fakes, similar to shot fakes, are used to bait the defense into reacting to a move that isn’t actually going to take place. By pretending to throw the ball in the direction of a teammate and pulling it back at the last second, the offensive player can catch the defender (who is anticipating a pass) off-balance and effortlessly navigate to open space.