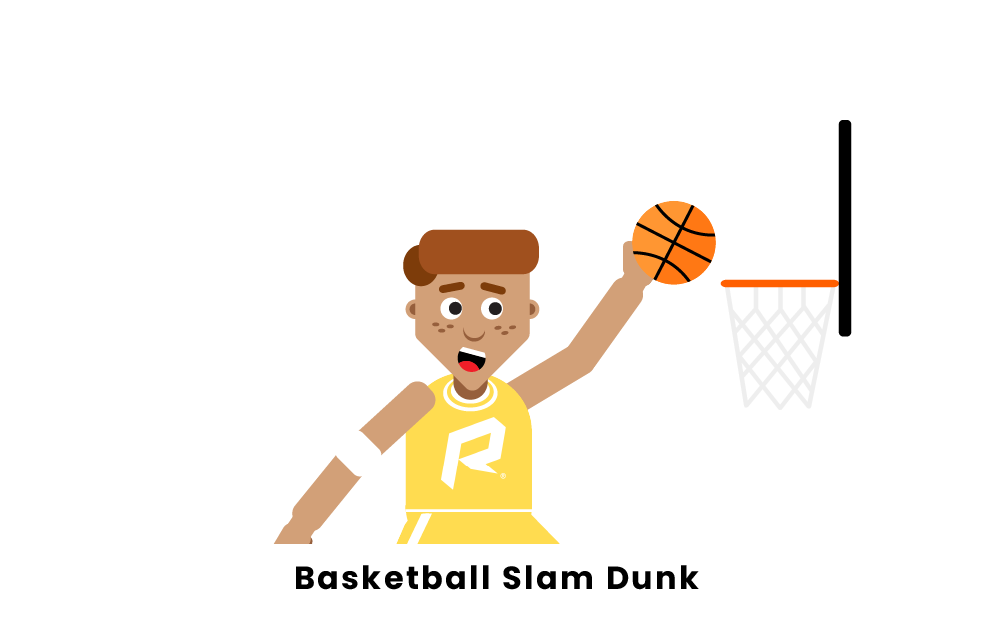 A slam dunk in basketball is an aggressive shot attempt where an offensive player with the ball leaps into the air and quite literally slams the ball into the net by grabbing the rim with one or two of his hands.

A slam dunk counts as a field goal and earns a team two points. There are many flashy ways to perform a slam dunk, but the minimum requirements for it to be called a slam dunk are that the ball is slammed through the hoop, and that the player touches the rim. Dunks can be done with a spin, backward, after an alley-oop, while hanging off of the rim, after passing the ball through one's legs; it can be as simple or as complex as a player desires. Players do slam dunks for many reasons.

This is one of the most entertaining aspects of the sport and where being over six feet tall really comes in handy. Though it's easier for taller players to make a slam dunk, shorter players often use their jumping ability to reach the rim and slam the ball through the hoop.

There are no limits to when and how players are allowed to slam dunk, as long as they don't commit an offensive foul by running through a set defender. It's most often done on fast breaks when players are one on one or even by themselves.

During a regular offensive situation, In some situations, it can be seen as showing off, especially at lower levels of play, but in the NBA it's celebrated and done quite often.

To begin with, a slam dunk is a very high percentage shot, difficult to miss if players can jump high enough and hard to block since players go so close to the rim. Dunking is also a highlight play, which can get the crowd and teammates excited. A good dunk also repercutes on social media and tv shows, giving the player exposure.

The slam dunk became so popular in the NBA that starting in 1984 the league added an event entirely dedicated to it in its All-Star game weekend, the NBA Dunk Contest. In this competition, several players compete against each other to get scored by judges based on the skill level of the slam dunk performed. Some of the best slam dunkers over the years include Michael Jordan, Vince Carter, Nate Robinson and Blake Griffin. The slam dunk is considered a tradition in the NBA, and fans await to watch whatever creative and difficult new shots the competitors have to present.

Who was the first to slam dunk?

Although reports of who and when, many believe that the first slam dunk made in an organized game was basketball was by Joe Fortenberry, around 1936. Fortenberry, who was 6’8’’, would eventually be the captain of the American basketball team in the 1936 Berlin Olympics. Regarding the name of the play, It's said that the acclaimed sports broadcaster Chick Hearn coined the term slam dunk back in 1972, prior to that it was called a dunk shot. You may even hear someone off of the court refer to something as a slam dunk when they think something is easy to do. Over the years the slam dunk became very popular, and its use increased, especially in the NBA.

Why are slam dunks good?

Slam dunks can also boost team morale and send a message to the opponent that a team is ready to play aggressively. You'll often see slam dunks featured on sports networks' top 10 plays since they are such a highlight of the sport.