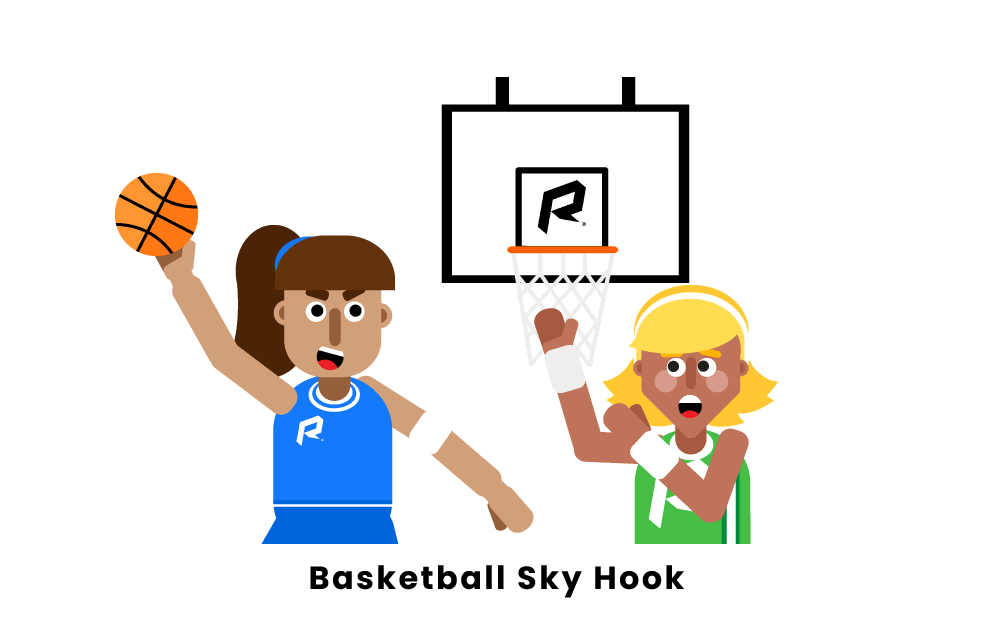 A skyhook in basketball is a famous post move shot that involves a player shooting with one hand on the side of the body. This move was made famous by Kareem Abdul Jabbar. The sky hook is a type of hook shot. Other types of hook shots are the running hook and standing hook.

The sky hook is a lethal shot because it creates space between the defender and the shooter, making it almost impossible to block. The shooter has their off-leg straight to jump off the ground, while the dominant leg stays bent. The shooter's shooting hand cradles the ball and scoops it overhead while the off hand extends wide to create more space. The key to getting an open shot with the sky hook is to position your body in between the defender and the ball.

The invention of the sky hook is usually credited to George Mikan in the 1940s, although some say it originated in Europe in the late 1930s. Regardless of where it started, the sky hook was perfected and made famous by Kareem Abdul-Jabbar in his time with the Los Angeles Lakers.

Despite its past success in the league, Kareem broke the NBA's all-time scoring record and won six NBA Championships with the help of the shot, the sky hook is extremely rare in today's game. It is not practiced or encouraged at all in the NBA.

The sky hook is an incredibly difficult shot to master. Unlike a typical jump shot that can be quickly replicated and is performed from a balanced, grounded stance, the sky hook is one big, fluid motion that requires jumping and balancing the ball with one hand. This difficult movement is even tougher when in an in-game situation. A player also needs to be big enough to get the shot off over taller players, especially in the NBA.

If one does master the movement, though, it can be nearly impossible to defend. There is no "recipe" to stopping the hook shot like there is for normal shots or other post moves. The only way to defend the sky hook is to anticipate and overplay it, which then gives the offensive player more options to score.