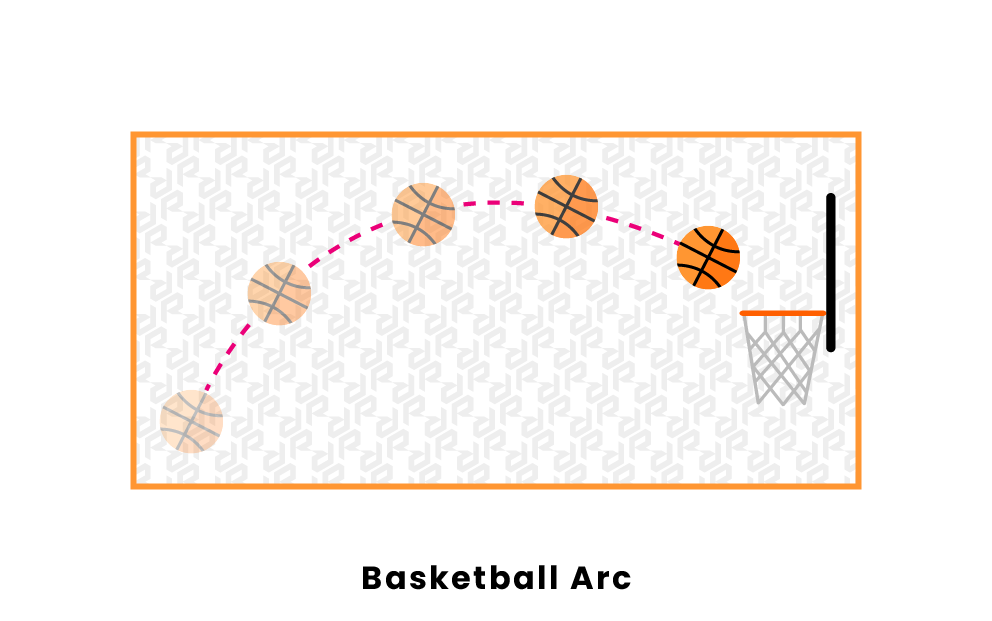 Although seemingly simple, shooting a basketball requires a complex combination of techniques and muscle memory. One crucial element to shooting mechanics is finding a proper arc. Keep reading to learn why arc is important and how it affects the accuracy of a player’s shot.

Arc That Is Too High

Shooting an especially high arc shot takes more power, making the shot inherently more difficult. When a shot is more difficult to take, the player will have a tougher time placing the ball exactly where they want it to go. This means that the ball may be short, long, or even be off target to the left or right.

If the ball has a higher arc, it also must travel further on its descent. The further the ball travels downward, the more speed it picks up. A faster ball that strikes the rim will do so with more force, making a softer shot and impact less likely. Instead, the ball will be more likely to bounce off the rim and go in another direction.

Arc That Is Too Low

Shooting the ball with too little arc is also a problem. This is because, as it is with high arc shots, the angle at which the ball approaches the rim essentially changes the size of the hoop. A basketball shot with a low arc therefore has a smaller mark to hit.

Even with a low arc shot, a player will still have a tough time achieving a soft shot. A low angle on a shot’s arc means the player needs to apply additional force on the ball in order for it to reach the hoop in less time. As with the over-arced shot, a ball shot with more force is going to hit the rim harder, making it more likely to bounce away.

Ideal Arc for a Shot in Basketball

The ideal arc for a shot results in the ball entering the rim at a 45° angle, 11 inches into the rim, or two inches past its center. This angle allows a shooter to get the ball on the rim softly while still giving them a larger area to shoot at. It also often results in a shot that hits the back of the rim on the inside of the hoop and drops directly through the net.

Achieving a 45° angle at the end of the shot’s arc changes depending on the shooter’s height and where they are on the court. Shorter players need to shoot the ball higher, while taller players require a more shallow arc. Players closer to the basket will also have to shoot a higher arc shot than those further from the rim.

What is arc in basketball?

In basketball, an arc describes the curvature of the path of a shot. Players attempt to shoot with the perfect level of arc for their height. This gives them the largest possible target for the ball, as the hoop will seem relatively smaller if their arc is too high or too low.