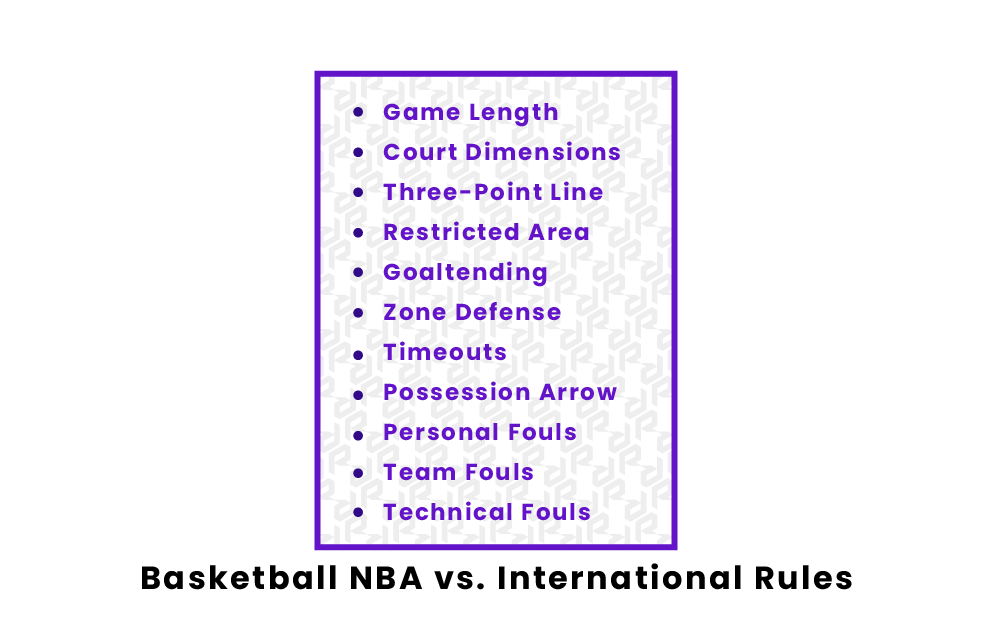 The rules of basketball vary depending on the level of play and the league. In international play, the rules are instituted by FIBA, the International Basketball Federation. Games that take place during the FIBA World Cup or Olympics, for example, follow these rules, and are sometimes very different from those used in the NBA. It should be noted that the rules explained here are only meant to highlight the differences between the two rule sets, and that more rules that do not conflict exist for many of these sections.

A regulation NBA game is 48 minutes long if there is no overtime and is split up into 12 minute quarters.

An international game is 40 minutes long if there is no overtime and is split up into 10 minute quarters.

The NBA’s restricted area is an arc on the floor that extends four feet (1.22 meters) from the center of the basket.

The restricted area in international play is an arc on the floor that extends slightly farther from the center of the basket at 4.1 feet (1.25 meters).

In the NBA, once the basketball enters the imaginary cylinder stretching upward from the rim, no player can touch the ball until it exits the cylinder.

In international play, any player can touch the ball after it hits the rim, whether that means tipping it in or hitting it away.

The NBA allows zone defense, but no player can be in the lane for more than three seconds unless he is actively defending against an offensive player. This restriction makes effectively playing a zone defense difficult.

The NBA allows each team to take seven total timeouts during a game before overtime. Timeouts, for the most part, may be used at any point in the game, but only a certain number can be taken into the end of regulation. Additionally, all timeouts are 75 seconds long and each team is given two timeouts for each overtime period. Moreover, both players and the team’s coach can call a timeout when the ball is dead or that team has possession of the ball.

In international play, each team receives a total of five timeouts before overtime. However, only two may be used in the first half, and three in the second half. All time-outs are 60 seconds long, and only one timeout is given to each team at the start of an overtime period. Any unused timeout from the previous period is not to be carried over and is simply discarded. Finally, only the team’s coach can call a timeout and he/she must do so when the game clock is stopped.

A player in the NBA is disqualified from play after receiving six personal fouls or, alternatively, two technical fouls.

A player in an international game is disqualified from play after five total fouls, which includes both personal and technical fouls.

In the NBA, a team receives two foul shots when the opponent has either accumulated at least five team fouls in any given period or has fouled the team in the final two minutes of any period. Offensive and technical fouls are not counted towards this penalty.

In international play, a team only receives two foul shots when the opponent has accumulated at least five team fouls in any given period. Technical fouls are counted toward this penalty, but offensive fouls are not.

A technical foul on a player in the NBA results in one foul shot for the opposing team. After the foul shot, play is picked up where it had stopped.

A technical foul on a player in international play also results in one foul shot for the opposing team. However, the game resumes at center court after the free throw is taken.