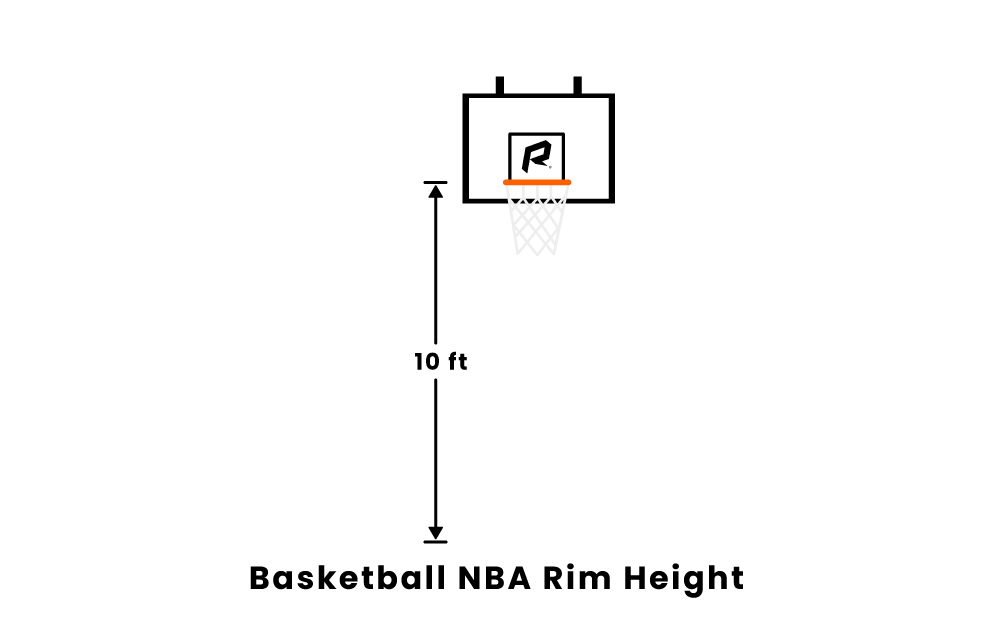 Basketball rims are 10 feet or 3 meters tall for high schools and pro leagues like the NBA. For youth leagues, the hoop can be shorter than 10 feet. This is the standard for all playing levels from high school and up. Younger ages play with shorter rims to enable the players to reach the rim with their shots.

The height of the rim is 10 feet because most professional players are 6 feet or taller. The rim serves as the perfect height to be challenging enough for all players.

Ever since the creation of the sport in 1891 by Dr. James Naismith (the sport was originally called “basket ball”), the height of the rim for professional leagues has always been 10 feet high. That is no different from the NBA, which from its first season to the present day, has maintained a 10-foot rim.

The regulation distance for both Men's and Women’s Division I in the NCAA is the same exact height as an NBA rim, which is 10 feet.

The backboard is behind the rim and connects the whole apparatus to the ground with a vertical support system, while the net is attached to and hangs below the rim. The backboard extends upwards to about 13 feet off the ground.

The net hangs about a foot and a half below the rim (8.5 feet off the ground).

How high is the rim in basketball?

Basketball rims are generally 10 feet high. In the NBA, NCAA, and high school basketball hoops are 10 feet or 3 meters tall, but for youth leagues, the hoop can be shorter than 10 feet.

Why is the rim 10 feet high in basketball?

Basketball rims have been ten feet high since the creation of basketball, which was invented by Dr. James Naismith in 1891. The reason for this consistent height is because when Naismith originally created his basketball hoops, he hung peach baskets from the side of a running track railing, which happened to be ten feet in height.  When basketball’s popularity increased, and basketball hoops began to be standardized as hoops mounted on a pole with a backboard, the height remained the same as Naismith’s original baskets.  The height was kept because it was considered an ideal height for the game, not too hard to reach by leaping or shooting, but also not low enough to make scoring points too easy.

Are basketball rims lower in the WNBA?

Basketball rims are not lower in the WNBA; they are the standard height of 10 feet, which is the same as in the NBA and NCAA. In WNBA basketball, the court dimensions and the size and height of the rims are the same as in the NBA. However, the three-point line is closer in the WNBA. The NBA uses a 22-foot, 9-inch line that shrinks to 22 feet, 3 inches in the corners, whereas the WNBA uses a three-point line that is 20 feet, 6 inches from the rim throughout its curvature.