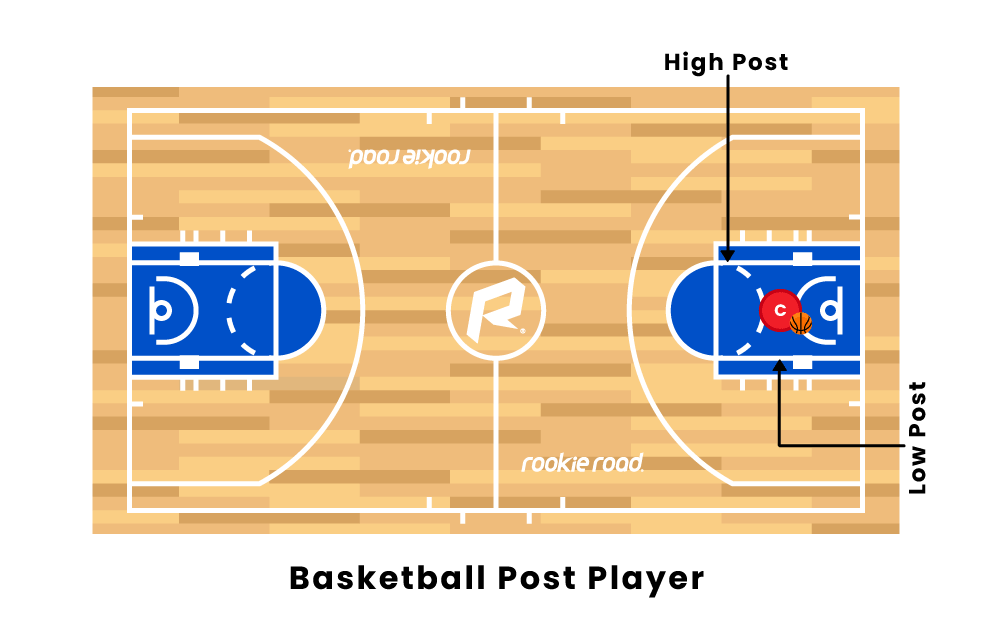 A post player in basketball is a nickname for a player on the team that likes to post up. A post up is when an offensive player puts their back to the basket and tries to use their positioning and strength to score. They attempt to back their way through the defender. A post player in most cases are the larger players on the team, typically the power forward and center positions.

A post player spends most of their time in the paint (close to the basket) scoring baskets on offense and protecting the rim on defense. On offense they utilize their size and strength to muscle their way into to paint and finish with a post move.

A post move is a single or series of fakes to fool the defense. A popular example of a post move is the Dream Shake, popularized by 90's star Hakeem Olajuwon. The move involves two seperate pump fakes followed by pivots.

Post players must also be able to play defense on the opposing team's post players. What that involves is not allowing them to enter the paint. They contest shots from the other team and try to block the ball.

There is no such thing as the right answer for what makes the best post player. There are countless combinations of skills and tactics that can shape any one hooper into a good post player. In general though, a good post player on offense must be able to create their own space and stand in what is known as a dangerous position. Good post defenders tend to have long arms for blocking shots as well as a high basketball iq for grabbing rebounds.

As the sport of basketball has evolved post players have become less and less relevant. In the modern game there is a greater emphasis on three point shooting, spacing, and pace. None of which the traditional post players are capable of providing for a team. They have been replaced with athletic centers and forwards who are capable of shooting long range shots. That being said, the game has had periods where post players have been the focus of the offensive attack, especially in the 1990's, a decade when a lot of great "big men" played.

Hakeem Olajuwon is known for his footwork, revolutionizing the position in that area. He helped usher in the fad of players utilizing post moves to assist them in being a primary source of offense for their team.

Shaquille O'Neal was massive, 7'1" and 325 pounds to be exact. He terrorized defenses with massive dunks, disrespectful blocks, and several backboards broken.

Dwight Howard is a center who starred on The Orlando Magic in the late 2000's using his strength and size. Howard is a victim of the modern NBA changing and moving away from post players, and in the past few years has bounced around from team to team. He is considered to be the last dominant traditional big man in The NBA.