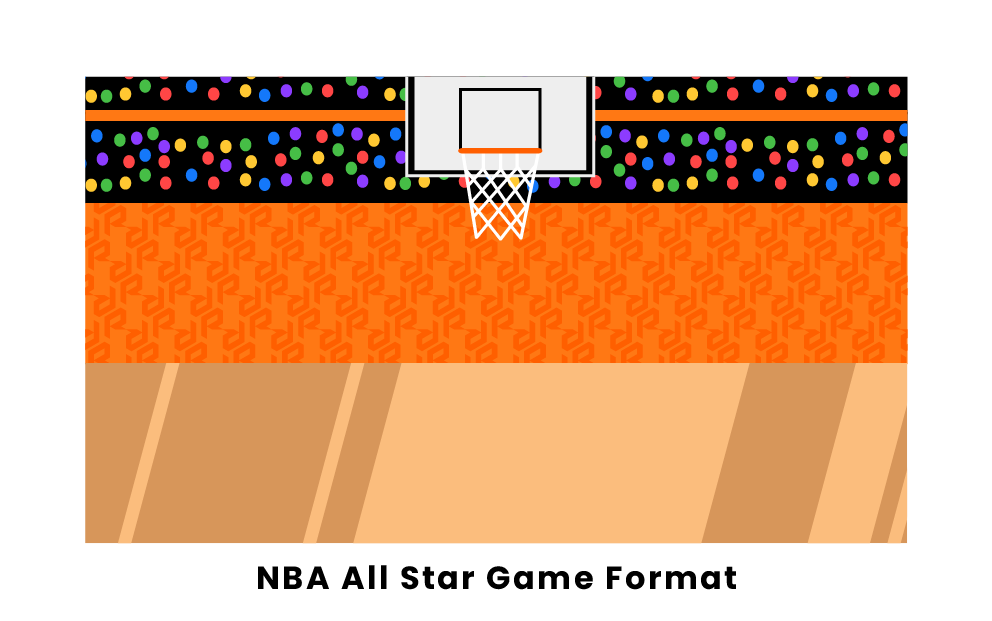 The NBA All Star game is an exhibition game played once a year that features the best NBA players from that season. The game is played about half way through the season each year. All star players are selected through a combination of fan, player, coach, and media voting. The teams and game format have changed dramatically in the last few years. Currently, two captains (the two best players) are selected and use a draft process to pick their respective teams with the players voted into the game.

Until 2018, players would automatically be rostered onto All-Star teams based on their conference. It was an East vs. West game, with the best players from each conference teamed up together. However, in 2018, the NBA made a huge change. In the 2018 NBA All Star game, the leading vote getter from each conference was elected as a captain. The team captains then choose their respective teams. Players are voted in through a somewhat complicated process and the captains have the ability to choose from those selected players.

What Is the Format of the NBA All Star Game?

The NBA All Star Game is a four-quarter game, with the score resetting after the first three quarters and a target score that is set to end the final quarter.

Voting has changed dramatically in recent years as well. Prior to 2018, starting players were voted into the game strictly off of fans' votes. Zaza Pachulia, a non-All Star caliber player, was even nearly voted in as a starter after many people teamed up on social media to pull a prank. As a result, rather than having starters voted in based off of 100% fan votes, they are now voted in by 50% fan vote, 25% current players’ votes, and 25% media votes. Reserves are chosen in a much easier way. NBA head coaches are given a ballot and they must each choose 2 backcourt players (guards) and 3 frontcourt players (forwards or centers).

For the selection process, the All-Star team captains go back and forth selecting their teams. The captain with the most votes gets the first overall pick. They first pick from the other eight starters. Each player needs to fill the team with two backcourt members and three frontcourt players, including themselves.

Two weeks before the All Star Weekend, the coaches are selected. The coach of the team that has the best record at the time in each conference is chosen to coach their respective teams.

The All Star game itself has remained consistent until 2020. The game had followed a normal NBA game format: four 12-minute quarters were played, and the team with the most points at the end of the fourth quarter won the game.

Following the tragic death of NBA legend Kobe Bryant, the format of the game was changed to honor him. The first three quarters are still 12 minutes each. After the first 12 minute quarter, the team with the most points earns $100,000 to donate to their charity of choice. The score then resets to 0-0 before the second quarter.

The second and third quarters are played in the same format as the first with the score resetting before each and the winner earning $100,000 to donate to their selected charity. The game gets very interesting heading into the fourth quarter. The points from the previous three quarters are added up.

Rather than playing a timed quarter, the teams play to a desired score limit. The score is decided by adding 24 (the number worn by the late Kobe Bryant) to the score of the team in the lead. In the 2020 NBA All Star game, after 3 quarters, the score was 133-124, so the target score was set to 157. The team to reach this score first won the game.

How are the players selected to be an NBA All Star?

Players are voted into the NBA All Star Game by fans, fellow players, and media representatives. Fans have 50% of the vote, players have 25%, and the media has 25%. Reserve players are voted in strictly by head coaches. Each coach gets a ballot and writes down 2 backcourt players and 3 frontcourt players. Combining the starters and reserves gives the full All Star list. They then must be divided into their respective teams.

How are NBA All Star players divided into teams?

The two players with the most votes are selected as captains, who then participate in a draft process to pick their teams. The player with more votes picks first. They must fill their starting lineups with the starters voted into the game. After filling their starting lineups, they move to reserves. The player who is selected second in the first round gets the first pick in the second round. The two captains then take turns selecting players in front of the reserves voted into the game.

How is the NBA All Star game formatted?

The newest format features a complicated format. The score resets after each of the first 3 quarters. So starting each quarter the score is 0-0. The team leading at the end of each quarter earns $100,000 to donate to a charity of their choice. These are 12 minute quarters just like a normal NBA game. Beginning the fourth quarter, the scores from the first three quarters are added up. A target score is selected by adding 24 points to the team with a higher point total. Whichever team reaches the target score first wins the game.