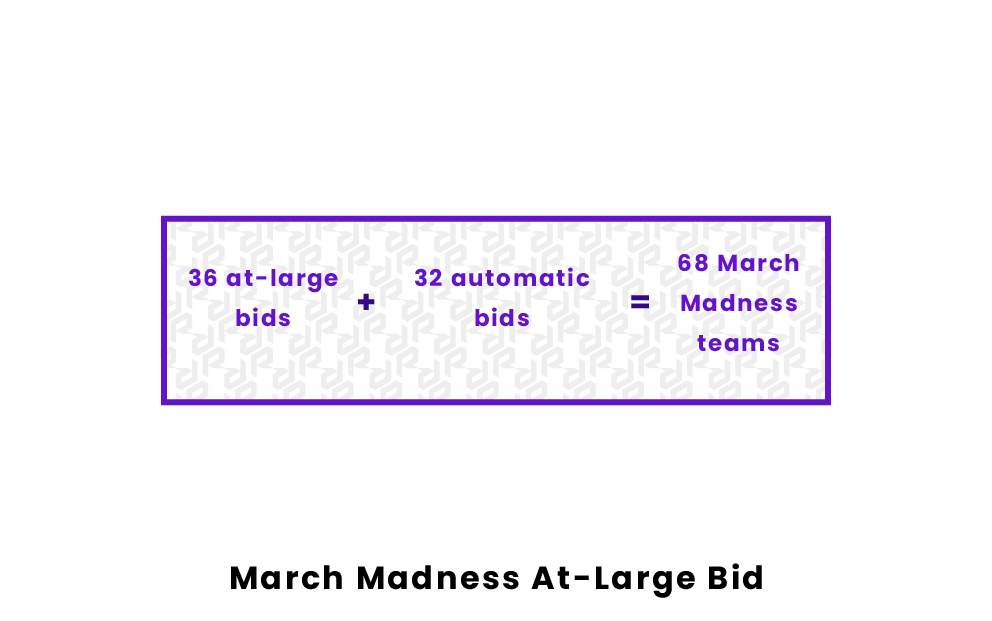 Selection Sunday, the day when teams are selected for the NCAA Tournament, is one of the most exciting times in college basketball. Some teams get in by winning their conference championship, but others get in through at-large bids. Keep reading to find out how at-large bids work and how many are given out.

What Is an At Large Bid in Basketball?

In the NCAA March Madness Basketball Tournament, there are two types of bids: an automatic bid, given to the winner of each conference’s champions (of which there are 32), and an at-large bid. The at-large bid is for teams that do not win their tournament but have enough talent to qualify for the tournament anyway.

How Many At-Large Bids Are in the NCAA Tournament?

There are 36 at-large bids in the NCAA Tournament. These 36 teams are selected by the Selection Committee on Selection Sunday, who also seed all 68 teams in order to set the field.

How Do Teams Qualify for an At-Large Bid?

There are many ways a team can qualify for an at-large bid. Statistics such as win-loss record, offensive and defensive efficiency, and other factors may lead to a team being selected. In the past, the Committee has used a statistic called RPI, which gives a definitive ranking to each team based on a myriad of factors. The NCAA introduced a new version of the RPI, the NET rankings, during the 2018-19 season.

Conference strength is a huge factor when deciding the bids. Teams that play in the Big Six conferences (SEC, ACC, Big 10, Big 12, Pac-12, and Big East) are given priority due to the challenging nature of their conferences, while lesser conferences (such as the American, Mountain West, and West Coast) have fewer teams that qualify for the at-large bids.

Even teams in smaller conferences that win the automatic bid get seeded lower than many at-large teams from the Big Six due to the nature of the conferences. Statistics like RPI and NET are also particularly helpful in determining conference strength, for they level the playing field and allow mid-majors to have a chance to be selected for at-large bids.

Who decides which teams get an at-large bid in March Madness?

Teams who get an at-large bid are chosen by the NCAA Division I Men’s Basketball Selection Committee. More commonly referred to as simply the Selection Committee, this group of school administrators from each conference look at a variety of factors and present their resulting choices at a special ceremony known as Selection Sunday.

How do they decide which teams get an at-large bid in March Madness?

They decide which teams get an at-large bid mostly by ranking them using the NET system. The NET system utilizes game results, strength of schedule, game location, scoring margin, net offensive and defensive efficiency, and the quality of wins and losses to rank teams and predict their future performance. The Selection Committee then uses those rankings to choose the 36 best teams that did not receive automatic bids.

How many teams get an at-large bid in March Madness?

In total, 36 teams receive an at-large bid in the NCAA Tournament. Based on many unique factors, such as win-loss record and conference strength, the Selection Committee decides that these 36 teams are worthy of qualifying for March Madness despite not winning their regional tournaments.