What Is March Madness? 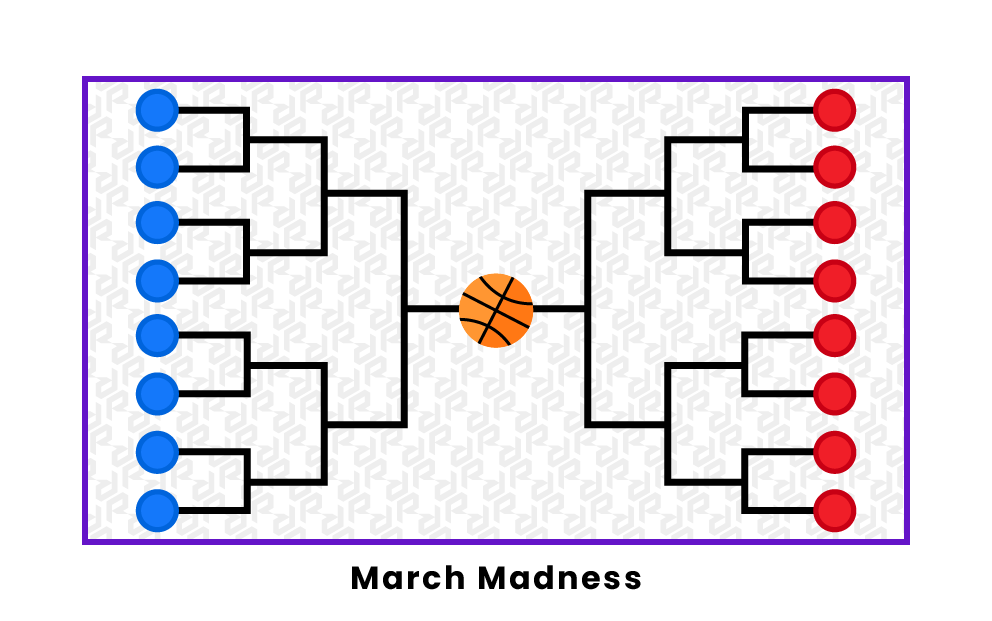 March Madness is a yearly NCAA Division I basketball tournament that takes place from the middle of March through the beginning of April. The tournament pits the country's best 68 college basketball teams against one another in six rounds (plus a play-in round) of competition to determine who will be that given year's National Champion. The tournament has become one of the biggest, most exciting sporting events in a calendar year, with fans all over the country filling out brackets and entering them into competitions. The tournament has a storied history and has created many memorable moments along the way for fans and athletes alike.

When Did March Madness Begin?

The first March Madness tournament was held back in 1939, with only eight teams participating. The tournament was created by the National Association of Basketball Coaches and spearheaded by former Ohio State Basketball coach Harold Olsen. The first tournament included eight teams competing in three rounds of competition. The first tournament included Oregon, Texas, Oklahoma, Utah State, Brown, Villanova, Wake Forest, and Ohio State. The 1939 tournament final saw Oregon versus Ohio State, in which Oregon won 46-33. In 1951, the tournament doubled in size, from 8 teams to 16. It again expanded to 32 teams in 1975 and 64 in 1985. In 2011, the tournament finally expanded to its present format, including 68 teams.

Which Colleges Participate in March Madness?

March Madness includes the best 68 college basketball programs in the country to face-off against each other, determining who will be that year's National Champion. There are 32 D-1 conferences separated based on their location in college basketball. The 32 Conference Champions get an automatic bid into the tournament, and the 36 other teams selected are called "at-large bids." At the end of each college basketball season, the Division-1 Men's Basketball committee members go through several different criteria to select the remaining 38 teams.

There is no limit for the number of schools chosen from each conference to participate in March Madness. These schools are selected based on their overall season record, schedule difficulty, advanced statistics, and other criteria. The most important criteria used in determining these remaining spots include the Ratings Percentage Index (RPI), strength of schedule, and losses outside the top 100 RPI. The newest and most important criteria being used to determine which teams get selected into the tournament are Quadrant 1 and Quadrant 2 records. Every game a team plays in a season falls into one of four quadrants, based on RPI and game location, which are as follows:

The better the opponent and location of the game (home, away, or neutral turf) mean the game will be ranked in a higher quadrant. Each year's participating teams, seedings, and matchups are announced on Selection Sunday via a live show.

What does March Madness mean?

March Madness refers to the time of year when the NCAA Division 1 Basketball National Championship tournament is held, typically in the middle of March and lasts through the beginning of April. The tournament features 68 of the best college basketball programs in the country in that specific year, going up against each other to see who comes out on top.

How does March Madness work?

In March Madness, 68 teams are broken into four different regions, South, North, East, and Midwest. The winners of the 32 different conference tournaments get an automatic bid into the tournament, while the other 38 teams are selected by the NCAA Tournament Selection Committee using specific criteria. The selected teams, seeding, and bracket are all announced on Selection Sunday, usually about a week before the start of the first round.

Why do they call it March Madness?

The term March Madness is used to describe the excitement typically in the air when the NCAA Division 1 Basketball Tournament comes around each year. The tournament is known for its frequent excitement and "upset" victories, leading to many describing the event as madness. The term was originated by Henry V. Potter, who used the term to describe the excitement surrounding the Illinois State High School Basketball Tournament. Potter was a teacher and basketball coach at Athens High School in Illinois and coined the phrase in an essay that appeared in the Illinois High School Athlete.

What are the rounds of March Madness called?

The names of the rounds in March Madness from start to finish are as follows:

Pages Related to What Is March Madness?