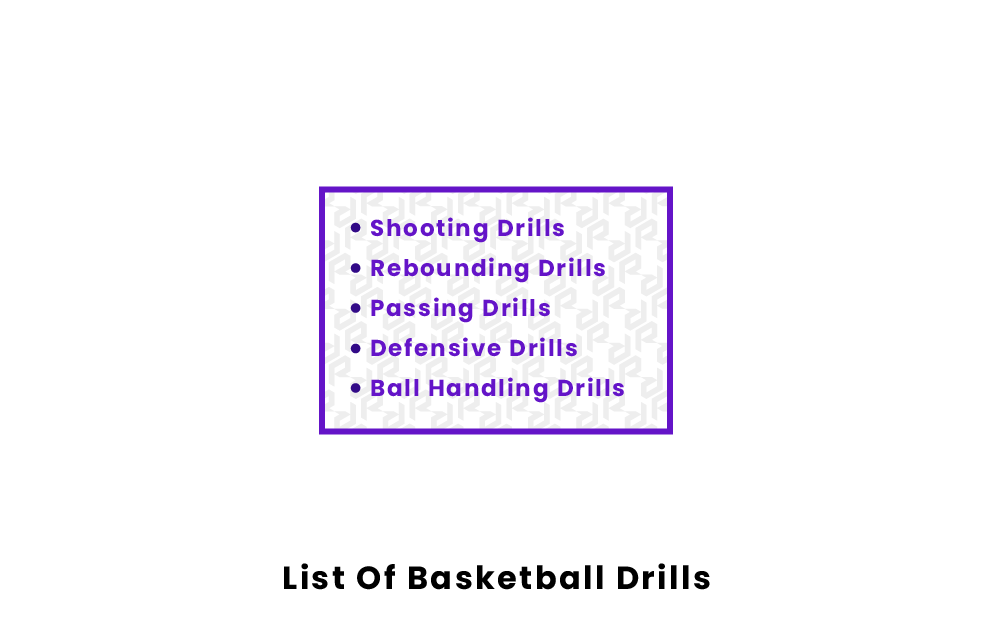 Basketball is a sport that requires hours of hard work and practice to master its skills. Players use a variety of drills, both individual and team, to help them strengthen their fundamentals. Basketball drills can focus on any aspect of the game including shooting, passing, rebounding, court vision, defense, and much more! Here is a list of basketball drills to help you improve your game.

The Mikan Drill: The Mikan drill is an individual drill that focuses on finishing around the basket and footwork. This drill is highly recommended for beginner players and big men that need to practice finishing at the rim. You will only need a basket, one basketball, and a single player to perform this drill. The Mikan drill starts by having the player start under the basket holding the basketball. The player will then alternate taking right handed and left handed layups, rebounding themselves, and immediately going into their next shot after getting the rebound. Players should focus on their footwork and make sure to jump off the proper leg when finishing.

Partner Shooting: Partner shooting is one of the most simple yet effective shooting drills for beginner players. This drill requires two players and one basketball. One player starts with the ball at a designated spot, shoots it, and chases their rebound. The next player will then move to the same spot, receive a pass from the player who just rebounded, and shoot the ball. The two players will alternate rebounding and shooting until they reach their goal (Ex: 10 made shots). Pick five different spots on the floor to shoot from and repeat the previous steps for each spot.

The Superman Drill: The Superman drill is a basic rebounding drill used to teach players the fundamental motions of rebounding. The drill only requires a hoop, basketball, and one player. There are several variations of this drill that involve adding additional players or balls to increase intensity and work on contact finishing. In the Superman drill, a player starts with the ball on either side of the basket, outside of the paint. They will throw the basketball off the blackboard so that it bounces to the other side of the paint. The player should then follow the ball as quickly as possible and jump as high as they can to grab the ball, while keeping their arms fully extended. After securing the ball, the player should bring the ball down and chin it while maintaining a solid stance. Now repeat these steps, alternating either side of the basket for a set amount of reps or time.

The Circle Box Out Drill: The circle box out drill is a great drill for practicing boxing out and rebounding. This drill can be done with two, four, or six players, as long as it is an even number. Players will match up against each other at mid court in the center circle, the defenders on the inside of the circle and the offensive players on the outside. The ball will be placed directly in the middle of the circle and the two opposing players should be facing each other. When the whistle blows, the offensive player(s) will attempt to grab the ball, while the defenders must pivot and box out for a specified amount of time (usually 10-20 seconds) or until the offensive secures the ball.

3 Man Weave: The 3 man weave drill is a classic passing drill used at every level of basketball. The drill requires at least three players, one basketball, and a full basketball court. The players will start by lining up in three evenly spaced lines on the baseline. The middle player starts with possession of the ball and passes to a player on either side of them. As soon as the player makes their pass, they should follow the pass and cut behind the player they passed to. The second player who received the ball will now pass to the third player on the other side of the court and cut behind that player to follow their pass, just as the first player did. This process of passing and cutting to replace spots should be repeated until the players reach the other side of the court.

3 on 2, 2 on 1: The 3 on 2, 2 on 1 drill is a fun team drill used to work on passing and finishing in transition. You will need at least five players and two baskets. Start with three players and the ball on one side of the court, with the other two on the opposite side. Have the player with the ball dribble down the court towards the two defenders, while the other two players on their side sprint ahead of the ball. When one of the two defenders steps to the ball, the player should make a good pass to one of their open teammates for an immediate shot or layup. The player who shoots the ball or turns it over will then sprint down the court and play defense against the original two defenders who will execute a 2 on 1 break. Now repeat the drill with the 2 on 1 players becoming the new group of three.

The Hero Drill: The hero drill is another simple passing drill to help players master the fundamentals of passing the basketball. The drill requires three players, two basketballs, and a full basketball court. The players will start in three evenly spaced lines on the baseline, with the center player and one of the outside players holding a ball. The players will then pass and catch the ball while sprinting up and down the court. As the middle player passes to the outside player without the ball, the other player will pass to the middle player as he turns to catch the ball. The middle player will then pass the ball back to the player he received it from and repeat as they run down the court. It is important to note that players do not switch positions throughout this drill and should alternate after completing an entire trip up and down the court.

The Zig Zag Drill: The Zig Zag drill is one of the most popular defensive and ball handling drills in basketball. This drill requires one offensive player with the ball and one defensive player. The offensive player will start at the baseline in the corner of the court, with the defender in a proper defensive stance in front of them. The ball handler will dribble hard and fast from the corner to the foul lane, then back to the sideline in a zigzag motion repeatedly until they reach the other end of the court. The defender's goal is to remain in front of the ball handler the entire time, keeping a solid defensive stance and drop stepping at each turn the offensive player makes. The two players will switch roles on their way back down the court.

Defensive Shell Drill: This is one of the most widely used team drills for defensive rotations and positioning. Coaches utilize this drill to teach players how to play proper help defense. It requires four offensive players and four defensive players. The offense will line up around the perimeter of the arc to form a shell, and the defense will line up on each corner of the foul lane to form a box. The offense then passes the ball around the perimeter slowly as the defense rotates into position to play both on ball and help defense. Each time the ball is passed, the coach should check to ensure each defensive player is in the proper position. As the players get used to the movement, increase the speed of passes and incorporate driving into the lanes for defensive slides.

Two Ball Dribbling: Two ball dribbling is a basic but effective drill for practicing ball handling. This drill can be practiced with just one player or multiple at the same time. The player(s) should start on the baseline, with two basketballs in hand. They will then walk up and down the court while dribbling both balls at the same time as hard and fast as possible. Once players get used to the drill, variations for dribbling moves or speed can be added. For example, alternating dribbling the balls, jogging instead of walking, and practicing crossovers, between the legs, or behind the back moves up and down the court.