How Much Does An NBA Coach Make? 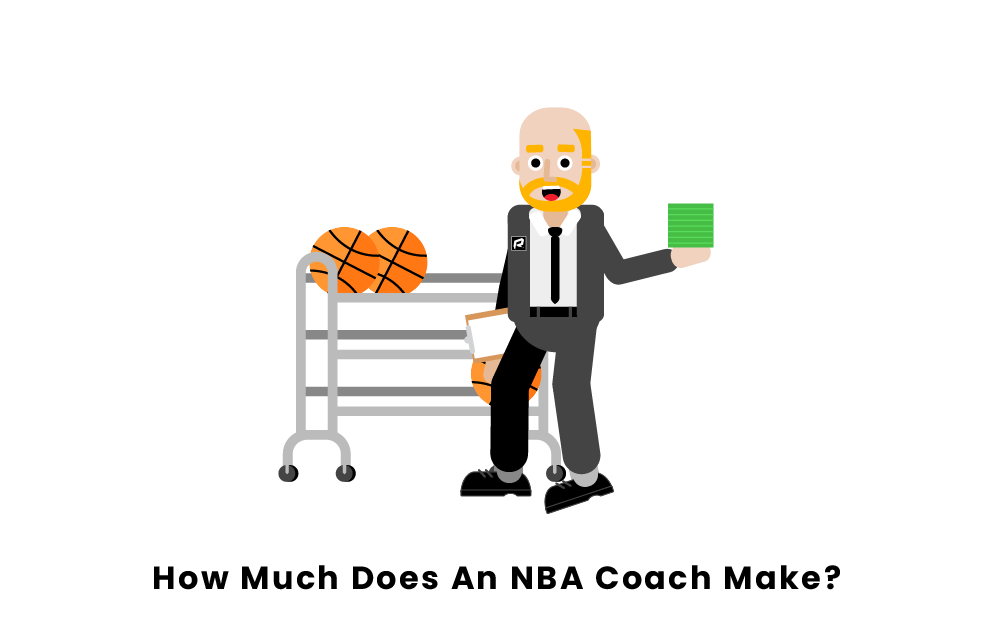 Being an NBA head coach is not for the faint of heart. Coaching over 80 games a season and doing so while overseeing the highest-paid group of athletes in professional sports is no small task, and so it’s no wonder NBA coaches make a good amount of money. Keep reading to learn about how much head coaches in the National Basketball Association get paid as well as how that stacks up to other pro sports.

How Much Does an NBA Coach Make?

For the 2021-22 season, the average salary for an NBA head coach was $3.5 million. In fact, NBA head coaches actually have a minimum on their salary of $25,000 per game, meaning if they coach all 82 games, they cannot make less than $2 million in a season. Unlike NBA players, however, NBA coaching salaries have no ceiling and can be as high as the coach demands. Currently, the highest-paid coach in the NBA is Gregg Popovich of the San Antonio Spurs, with a salary of $11 million per season. The only other coach in the double digits is Philadelphia 76ers head coach Doc Rivers, who is currently making $10 million per season.

NBA Salaries Compared to Other Sports

When compared to the other major sports in America, NBA coaches are compensated extremely well. In both the MLB and NHL, the highest-paid coaches make around $5 million, equivalent to the tenth-highest paid coach in the NBA. The only sport that features higher salaries is the NFL, where the top coaching salary is over $12 million. However, the higher salaries seen in the NBA don’t stand out as much when compared to the average salary of the sport’s players. NBA players make over $8 million a year on average, more than double MLB players and more than triple NHL players. NBA organizations commit much more money to their teams and, because of this, are willing to commit more money to find the right coach who can bring them success.

While some professional leagues see head coaches staying under contract for many years, the NBA doesn’t offer quite the same job security. The average tenure for an NBA coach with one team is 2.4 years, the lowest number among professional sports. NBA coaches are perhaps the most scrutinized of coaches in any league. So, even though NBA coaches make the most in terms of salary, their salaries are usually not guaranteed for as long as coaches in other leagues. There are some exceptions to this, however. Gregg Popovich, the highest-paid coach in the league, has been the head coach of the San Antonio Spurs for 26 years, far and away the longest period with one team for any current coach.

Who is the highest paid coach in the NBA?

The highest-paid coach in the NBA is Gregg Popovich, with a salary of $11 million. Popovich has certainly earned his paycheck, having been the coach of the San Antonio Spurs for the last 26 seasons. During his career, he has won five NBA championships. In addition, he has been named the league’s Coach of the Year three times and has won Coach of the Month 17 times, an NBA record.

Do NBA coaches get a bonus for winning the NBA Finals?

Yes, NBA coaches do get a bonus for winning the NBA Finals. Many contracts in the NBA are filled with incentives that pay a player more depending on how well they perform, and coaches’ contracts are no exception. Most coaches have a clause in their contract that pays them extra for making it to and winning the Finals. In addition, teams receive money as they advance through the playoffs based on ticket sales and merchandising, and owners may choose to distribute that money to the players and the coaching staff.

What is the average salary of an NBA coach?

The average salary for an NBA coach is about $3.5 million per year. While there are a number of experienced head coaches in the league, many of them make around the same amount. There is actually a salary minimum for head coaches of $25,000 per game, amounting to just over $2 million for a season if the coach is there for all 82 games. On the other end of the spectrum, there are currently two coaches making $10 million or more. Doc Rivers and Gregg Popovich make $10 million and $11 million, respectively, and are two of the most experienced coaches in the league.

Pages Related to How Much Does An NBA Coach Make?